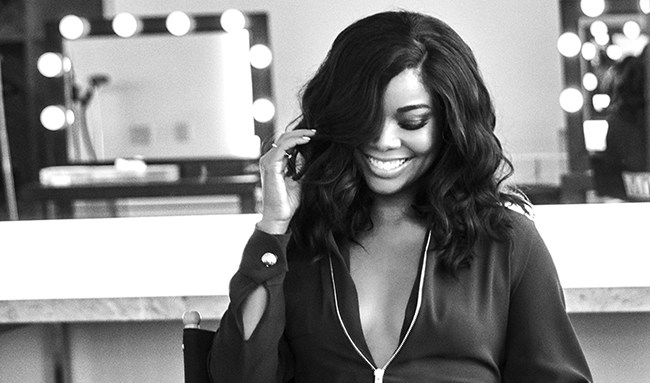 The actress is following in the footsteps of Jessica Alba, cofounder of Honest Co.; Drew Barrymore, Flower Beauty founder, creative director and co-owner, and Jennifer Aniston, a former Living Proof stakeholder, in building a beauty brand from the ground up. Although she’s been asked on countless occasions to be the famous face fronting a hair-care brand, Union was never completely sold on any brand’s full assortment and didn’t want to be attached to one she didn’t wholly endorse for something as important as her hair, which she’d struggled since childhood to embrace. So, she created her own brand, Flawless by Gabrielle Union, that will be launched at Ulta Beauty on April 16.

“For me — having skin in the game — it deepens the connection,” said Union, speaking to WWD earlier this month from Milk Studios in Los Angeles, where she was being photographed for Flawless. “It makes me work a lot harder than if I was just a hired gun. I want to make sure that it’s right for me, for my family, for my friends, and for every person with textured hair. I want to have a seat at the table, and part of that is having ownership.”

She’s dictating the terms of her entertainment résumé, as well. Her next movie, “The Public,” tackles serious issues and has a cast featuring Alec Baldwin, Emilio Estevez, Jena Malone, Christian Slater and Taylor Schilling. “I like to mix it up. Projects with bigger budgets, bigger checks and some with smaller, more topical relevant subject matter. ‘The Public’ talks about homelessness and what is our moral duty to those less fortunate,” Union said. “We tend to treat homelessness like a plague or something to be pushed to the side as we gentrify neighborhoods, but most of us are a couple checks away from being in the exact same spot.”

Union, who stars as the title character in the BET drama “Being Mary Jane,” teamed with executives responsible for Macadamia Beauty LLC, the company behind the hair-care brand Macadamia Natural Oil, to develop Flawless. Vince Davis, chief executive officer of Macadamia Beauty, is serving as the ceo of Flawless, a separate entity from Macadamia Beauty, and Union’s longtime manager Jeff Morrone, senior partner at Primary Wave Entertainment, has played an active role.

Initially making its debut on March 1 on the web site Flawlesshair.com, Flawless’ range contains 10 products priced from $19 to $29: Moisturizing Shampoo, Moisturizing Conditioner, Smoothing Shampoo, Smoothing Conditioner, Hair Masque, Blow Dry Cream, Hair Protection Spray, Shine Spray, Oil Treatment and Edge Control Gel. The packaging is decorated in teal, gold and black, and marked by a logo with an intertwined G and U meant to evoke designer fashion labels. Industry sources estimate the brand will generate as much as $6 million in first-year retail sales.

Andy Rah, vice president of global marketing at Flawless, said, “You can cocktail the products altogether. They’re meant to be interchangeable and versatile to achieve looks without having to have 30 products.” He pointed to Hair Masque — a blend of avocado oil, marula oil and argan oil — as a hero item. Popular home hair remedies inspired the avocado oil in the mask. On the argan and marula oils, Rah elaborated, “the argan oil is one of the most highly searched oils for hair on Google out there. It’s our baseline oil that everyone knows and understands. The marula oil, aside from all the health benefits that it gives, also has a unique fair-trade story to it. It’s sourced in South Africa by indigenous women, so it’s bringing jobs.”

Union asserted, “I want women with textured hair to have great hair days.” In the past, she suffered to attain those joyful days and doesn’t believe that should have to be the case. “I went through a phase where I would leave my relaxer on so long, thinking the longer I leave this relaxer on, the straighter it’s going to be,” she recalled. “Cut to lesions, like open wounds in my scalp, trying to chase something that was unrealistic, and eventually probably in my mid- to late-20s I decided to give up my relaxer, and I went natural. By natural I mean underneath the weaves, extensions, clips and the hair color was my natural hair — thriving.”

Union had been introduced to society’s beauty standards as a youngster in Omaha, Neb. “Being the chip in the cookie, you realized my ponytails didn’t look like Heather’s ponytails, my friend with the long, blonde hair. You want what you don’t have. You want what other people are getting praised for. Nobody was praising my little pigtails, but Heather got all the love. You want that light. You want that shine. You want that attention, and I just never got it. Not for what I looked like,” she said. “[People were like,] you’re so smart, and you’re so funny, which is awesome and great, but, sometimes, you want to be objectified, dammit. I’ve had a long journey of self-acceptance and boosting my self-esteem. A lot of that comes from education and from life, but now that I’m on the other side of 40 [she is 44], I want pride to come from every part of my life.”

With Flawless and in her personal hair choices (when she’s not on set, she’s big on French braids, Senegalese twists and buns at the moment), Union doesn’t advocate for any particular hairstyles. “A lot of people like to think if you wear extensions or weaves, you’re full of self-hatred and, if you wear natural hairstyles, your sense of self and your sense of community and culture is at an all-time high. Sometimes that’s the case. Sometimes it’s not,” she said. “I just look at it as each person has their own hair journey, and they’re all amazing, valid, worthwhile and beautiful, no matter what.”

During her nearly quarter-century career as an actress, Hollywood hasn’t always been as receptive as Union is to a variety of hairstyles. She recounted, “Depending on the job and depending on the production, some were more open to natural hairstyles, not just on me but on my coworkers. Some felt certain kinds of characters needed to look more ‘appropriate,’ and their definition of what appropriate did not include braids or twists or natural hairstyles, but I did this role for ‘Top Five’ where my character was a reality star, and she had blonde hair. I felt the need to say repeatedly this is just for a role.”

Through the experiences she’s had in film, television and the beauty industry, Union has learned that having a position of authority is crucial to calling the shots, a lesson that informs her role at Flawless. “I was with Neutrogena for 10 years and loved the people in the company. I loved their commitment to melanoma skin cancer and talking to the masses about skin cancer,” she continued. “The line has grown so much since Kerry [Washington] has come on, and they’re much more inclusive with colors of makeup. They’ve really expanded that with Kerry, but Kerry has also come on as creative director. I didn’t have that power that Kerry has, so I look at it as growth and evolution.”

As the U.S. becomes increasingly diverse, Flawless, like Neutrogena, is tapping into swelling demand for beauty products geared toward multicultural consumers. “Five, six, seven years ago, there was a tiny little section in your Target or Wal-Mart of African-American products and a lot of it was relaxers and products to straighten hair. Recently with the boom in brands that are specifically for multicultural hair, there’s a lot of growth and a lot of great brands coming to market in that segment,” Rah said. “We talk more about hair texture versus black hair, white hair [or] Latina hair. We create products that are specifically for different hair textures and hair needs based on those textures.”

Union will be doing plenty of talking about textured hair and the solutions Flawless provides for it. Rah mentioned she will visit Ulta Beauty stores and trade shows, and promote the brand on social media. He said, “She wants to get her hands dirty basically and be really involved, and be out there and be seen as representing her own brand and having a part in the brand rather than being a pretty face in a picture.”