The superstar hairstylist is celebrating his 10th anniversary as Redken’s global creative director. 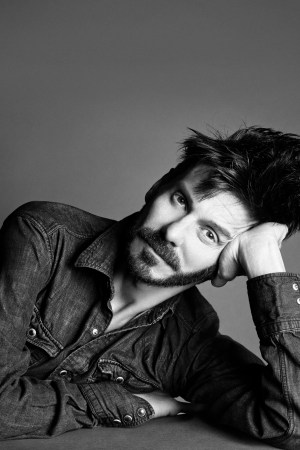 Celebrities and jocks are often known by a single name, once their fame rises, and the same can be said of superstar hairstylists. That’s certainly the case with noted hairstylist Guido Palau, who in the world of backstage fashion is referred to simply as… Guido. Palau is marking his 10th anniversary as Redken’s global creative director and has worked on runway shows since the early Nineties. He has seen plenty evolve in the backstage world since his first show, with Calvin Klein in 1994. The biggest change he’s seen has been the explosion of media covering backstage beauty looks, feeding the seemingly insatiable public demand for immediate, no red carpet-barred access. “The backstage arena has changed a lot,” he said. “[Now] the backstage is almost like the front stage. People want all sorts of content for their social media. Whereas before there would be five or six press, now there’s 40. There’s bloggers, there’s independent people, not just people who are attached to news outlets. There are camera crews from all over the world. And that’s all mixed in with us trying to be creative and trying to get up to 60, 70, 80 girls ready.”

This story first appeared in the September 9, 2015 issue of WWD. Subscribe Today.

Style has also evolved dramatically, as have the sheer number of shows, he said. “The shows in the early Nineties — Helmut Lang in Paris was memorable because it was such a new way of showing models of different ages. Helmut Lang changed the way fashion shows were presented. It was a very exciting, changing time in fashion. And now, the natural look is back again.”

Where shows are held determines their style as well. “There are things that could fly in Paris but wouldn’t work in New York or Milan,” he said. “Each city has its own vibe. New York is kind of sporty, London is very music-inspired. In Milan, there’s a richness and a sexuality, and in Paris, it’s chic and slightly avant-garde, and you take that into consideration.”

It’s the relationships with designers that make his job especially enjoyable, he said. “I’ve been very fortunate in my career that I’ve had long-standing relationships with so many designers. I love what I do with Prada — she always makes me look at hair in a different way,” said Palau. “Ralph Lauren is so passionate about what he does, and he has a great point of view on beauty and women. Marc [Jacobs] has an amazing gut instinct to fashion and design, and he really likes a collaboration. I still work with Donatella Versace, 20 years on. I mean, I’m as good as the designers I work for. They push me, inspire me, and they challenge me. All of them have a different kind of message, different women they’re trying to speak to, and I love their differences. It keeps me on my toes.”

The same can be said about his relationships with fellow artists. “One of the first times I worked with Guido was on an early Versace campaign with Kate Moss shot by Richard Avedon — that was back in the Nineties,” said François Nars, founder and creative director of Nars Cosmetics. “Guido is so much more than a hairdresser, he is a visionary with an amazing eye and a fantastic sense of style. The looks he creates are always correct, precise and coherent. His work is intelligent and sensitive. He is also very funny and has a great sense of humor.”

Asking Palau what his favorite runway looks have been is a little like asking him to choose his favorite child. While the Eighties were of questionable sartorial decisions for both hair and apparel (bangs so heavily hair-sprayed that they stood up on their own), one of Palau’s favorites was Marc Jacobs’ spring 2011 rtw show, which had an Eighties club-kid vibe. “We tried to do 80 different characters,” he said of the models he sent down the runway. I felt like, ‘I’m never going to get this done.’”

Another favorite: the spring 2010 show of Alexander McQueen, whom Palau credited with “expanding my beauty boundaries.” The Plato’s Atlantis-themed show was the designer’s last before his February 2010 suicide. “That one was particularly gratifying,” said Palau. “Everything came together at that point for him. The show was very forward and we did very dramatic hairstyles. It was hard to work out how I’d create them, but did in the end.”

While backstage Palau appears unflappable, often that’s an act. “I’m really only calm once the last girl’s on the runway,” he said. “And it’s not fashionable at the moment to be hysterical backstage. Decades in the past, that sort of energy was part and parcel of fashion shows. Now, that’s really not the kind of behavior that’s expected People want professionalism, and calmness goes along with that. I don’t think anyone wants to see someone lose it.”

Palau noted that he often gets ideas for new Redken products backstage, based on what he needs that doesn’t yet exist. “Backstage, it’s a fantasy,” he said. “But when I’m working with Redken, then I have to transfer into how women would wear that hairstyle and what kind of products they would need to achieve it. I love that.”

What inspires Palau? “I’m very lucky to deal with very diverse designers, who all have different opinions and have a different message. I feed off of that kind of energy, when you have someone like Phoebe Philo telling me about her inspirations and where she’s looking this season. It gives me a great insight into people.

“That’s how I learned my craft, really, working with really talented people,” continued Palau. “Miuccia Prada has a great depth of cultural and film references. You learn so much from that. And there are certain things that I find inspiring — growing up in England, all those teenage years that there was a music and fashion cult going around,” the 53-year-old Palau said, referring to the Seventies and the Eighties, his teenage years.

“Every show has something — even if it’s really simple — a kind of nervousness, whether the show will go well, and every backstage is memorable, because you’re always slightly unsure whether it’s all going to work. I always preempt everything that could go wrong. Part of my job now is to make sure that every kind of thing that could go wrong is worked out before. If something happens — whether it be a girl who comes in 10 minutes before the show because she had to do fittings or comes in with over-producted hair and you want clean hair — I have a solution for it.”