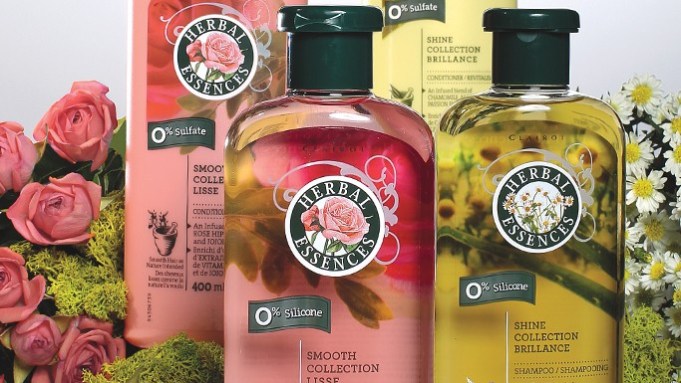 Come February, Herbal Essences will reintroduce two classic ranges — the Smooth Collection and the Shine Collection — housed in the brand’s trademark translucent, botanically bedecked packaging, which was available from 1995 until getting a new look in 2006.

Although the items are dead ringers for their former selves — scent included — formulas have been updated slightly to be sulfate- and silicone-free. “These are the perfumes inherent to what really spoke to the consumer,” said Walter Geiger, vice president and general manager North America Hair Care. “[The move is meant to] re-create the impact of the original campaign that resonated so strongly with women in the Nineties, but with a modern sensibility.”

Many consumers will remember the range for its sexual-innuendo-filled advertisements (think: woman in an airplane bathroom screaming “Yes, yes, yes” unknowingly over the intercom, culminating with the tag line “A Totally Organic Experience”). Although the details have not been revealed, the brand will be unveiling its first national ad campaign — said to make a nod to its predecessor — at the Grammys on Feb. 10. “There is a trend for nostalgia and bringing them back to simpler and more carefree times,” said Geiger. “We are [returning] to an iconic time for the brand.”

According to Symphony IRI, unit sales have been on the decline for Herbal Essences over the past three years in mass retailers, not counting Wal-Mart stores. Between Jan. 1 and Dec. 2 this year, there was a small increase in sales (up .04 percent), but sales numbers had been down the two years before that, 5.4 percent and 1.94 percent, respectively. Although the brand would not break out figures regarding the new launch, industry sources believe the four stockkeeping units could generate $20 million in their first year at retail.

Through the relaunch, Geiger is clearly trying to reignite some of the brand’s former glory. “We are trying to get those consumers who liked the brand in the past,” he said. “What also excites me is that I believe it will also appeal to a new user base that doesn’t overlap with the current [Herbal Essences] customer.”

Why look backward to move forward? According to Geiger, the move comes after thousands of consumers clamored for the company to bring back Herbal Essences’ previous formula and look, even sending a formal petition. “In my career at P&G, I’ve never seen so many consumer reactions for a certain item, which is much easier to track now with social media,” he said. “The most important thing here was the consumer demand.”

Originally introduced in 1971, during the height of the hippie movement, Herbal Essences (originally called Herbal Essence) is often referred to as the first sensorial or experiential shampoo. It was acquired by Procter & Gamble in 2001 with the purchase of the Clairol business. In 2006, in a move to “reenergize” the brand, the entire Herbal Essences line was repackaged and restaged to appeal to a younger audience. To wit, outer packaging became opaque and color coded, with a curved shape so that shampoo and conditioner bottles could fit together on a shelf, encouraging the purchase of both items.

“We moved away from classics, at the time, for a strategic reason,” said Geiger. “In order to reenergize the brand, which had become more for ‘every woman,’ we needed to reset our target ‘who,’ and focused on Millennials.” According to the company, today’s target Herbal Essences consumer is 18 to 35.

According to Geiger, the two returning lines were chosen because they were the top two ranges for Herbal Essences at retail in the early Aughts. The Smooth Collection, which features a soft pink packaging shade, contains rose hips, vitamin E and jojoba extracts, while the marigold-hued Shine Collection includes a blend of chamomile, aloe vera and passionflower extracts.

Coinciding with the launch will be national marketing support in print, digital and television. Additionally, the brand’s media plan centers on a “robust sponsorship” of the Grammys, including an in-show experience and integration with the Grammy Awards’ social channels. “We know women are deeply influenced by their social networks and pop culture, so we are creating an expansive sponsorship with the Grammy Awards that will reach her everywhere she is — digitally, socially, through mobile, on TV, through music and more,” said Geiger.