John Barrett and Jim Hedges are out to reinvent the high-end salon business and in the process, turn Barrett into an international luxe brand.

By Pete Born
with contributions from Julie Naughton
on January 15, 2016
View Slideshow 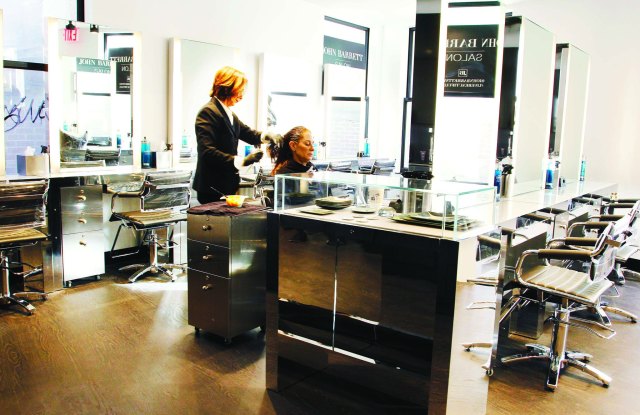 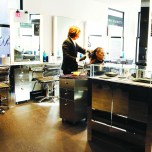 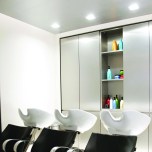 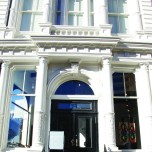 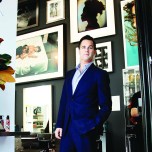 Walk into the new atrium-shaped John Barrett salon on Manhattan’s Bond Street and the first thing one notices is the wall full of blown-up photos of familiar faces — Madonna, Cindy Crawford, Kate Moss and Johnny Depp — taken by equally familiar names, such as Richard Avedon and Andy Warhol. Then there are the two cases of Tom Ford beauty and fragrance — Barrett is the only salon chain allowed to carry the brand. Nearby stands a display of vintage Rolex watches — priced from $1,500 to more than $30,000 for a gold model. Then there’s a stack of Assouline coffee-table books.

This story first appeared in the January 13, 2016 issue of WWD. Subscribe Today.

Barrett and Jim Hedges, his business partner and chief executive officer of John Barrett Holdings LLC, are out to reinvent the business model of the luxury salon — making it more inviting, more finely curated, more retail-driven — while laying the groundwork for a string of units across the U.S. and beyond.

Barrett remains the creative force, but the expansion push is being orchestrated by Hedges, a private equity investor. His goal is a bold one: to reinvent conventional salon industry doctrine and along the way, turn Barrett into a global luxury brand. While the market is filled with hair-care brands by famed stylists who started out with their own salons — think Frédéric Fekkai, John Frieda or even Vidal Sassoon — Hedge’s goal is to build a service business in which the revenues are mainly generated from the salons themselves rather than licensing Barrett’s name out for a shampoo line (not that he hasn’t already had one with another on the way).

Plans call for opening 25 salons within five years. The primary focus will be on creating stand-alone salons, mainly in New York, South Florida, Washington and Texas. Although the company does not break out projections, industry sources estimate that within a few years the operation could be generating $50 million in revenue. A Barrett salon was opened inside a Saks Fifth Avenue branch in Boca Raton, Fla., in early December.

Clearly, one challenge facing such an ambitious plan is the question of where to find enough highly desirable talent to staff all the salons.

In addition to a deal with Saks Fifth Avenue that calls for the construction of 15 in-store Barrett salons and spas by year-end 2017, including the New York flagship, there are four freestanding signature salons either in operation or on the drawing board.

The Bowery and Bond Street location — formerly the site of the Bowery Lane Theater with Jane Russell, Lauren Hutton and Helen Hayes once living upstairs — opened in October, as Barrett’s first step onto the New York scene beyond his original base at Bergdorf Goodman. But it was beset by physical disruptions and unexpected delays like street construction outside the windows, 12 days without water and noise from a Con Ed generator, which made it difficult to recruit the high-level hairdressers they needed at the salon along with their clientele.

“It has been a slow start,” Hedges acknowledged. But six new stylists are starting this year and “we have every confidence,” he said. Barrett agreed, saying, “Some of the significant hairdressers that we anticipated all along are now jumping on board.”

Hedges’ strategy to make salons more than just about a hairdo is on display at the Bond Street location. Tammy Fender of Holistic Skin Care has a treatment room in the upper level, where three core facials are offered. Nail enamel guru Tracylee Percival, director of nail services, teamed with Barrett to develop a customized menu of nail treatments. Now she’s helping stage a launch of a private-label nail lacquer line in the first half of 2016.

A new oral-care brand, Dr. Apa, has been added.

And since no famous self-respecting hairstylist can go without his or her own hair-care line, Barrett also is creating a new one to replace a previous brand, which will include about 20 stockkeeping units. It is set for launch in the second half.

Even as Bond Street is still finding its niche, Hedges and Barrett are plotting two more New York salons. The first — the Westfield World Trade Center unit, expected around June — will cover 3,600 square feet and hold 37 to 40 chairs. Then there will be the Barrett flagship, situated in a 16,000-square-foot, six-floor town house at 10 West 56th Street, where Elizabeth Taylor once lived. Barrett claims it will be the largest luxury salon in the U.S., probably opening in the fourth quarter. According to sources, there is some discussion about the possibility of remaining aligned somehow with Bergdorf’s, where Barrett has had a salon in the penthouse for 20 years and made his name.

The partners opened their first freestanding salon outside New York in Palm Beach, Fla., in February 2015, which has served as a template for the new retail concept. In an industry where sales of product and other non-service transactions average only 10 percent of a salon’s total revenues, they have soared to 30 percent at the Palm Beach unit.

Barrett’s operation is known for a warm chemistry between staff and clientele, and the new salons have a clubby English ambience, thanks to architect Daniel Romualdez, and a boutiquelike collection of items for sale, including vintage handbags, watches, footwear, Tom Ford beauty ►

Hedges became involved with Barrett first as a customer and over the years, he made observations. Referring to a typical client, he said, “The lady comes to us habitually. She is spending a lot of time, 45 minutes to three hours as a typical spectrum of time.” He noted that in a typical salon, women are on their phone or staring at a wet magazine. Instead, he believes women should be using their time in a salon to solve problems that come with looking beautiful.

In a bricks-and-mortar situation, the experience is all important, he said. “You’re solving problems you have to solve and you want to do it in as elegant a way as possible. But you also need to make sure that when you come into this environment you are going to feel smart, you are going to learn something, you are going to feel titillated and challenged. That’s nonexistent in the salon industry.”

With the lavish books and other high-priced objects on sale, Hedges’ goal is to create an environment that stimulates customers “with things they don’t normally get in a beauty environment,” he said. That goes for even small things. “In Palm Beach, my lady is giving or going to a dinner party. She needs a hostess gift or note cards.” He pointed out that those items are available in the salon, along with the Assouline books, tabletop merchandise and candles. “They run out the door,” he stated, noting that the Palm Beach unit also sells vintage handbags from Hermès, Balmain and Balenciaga priced as high as $25,000.

Also in the salon is a collection of vintage Rolex watches. “In the last eight weeks, we have sold eight pieces,” Barrett said. Hedges added that 11 vintage Hermès bags were sold in six weeks.

One of his key business strategies is developing collaborations with suppliers of pricy merchandise. In planning the Bond Street salon, it was decided to fill a huge wall with salon style artwork. So a partnership was formed with Circa 1881, which supplies nine large art photos chosen by Hedges who also has a background in the art world, and put up for sale. A large portrait showing Moss and Depp stretched out was taken by Annie Leibovitz and carries a price tag of $66,000.

The relationship with Assouline books is another collaboration. Basically all high-end luxury merchandise — the jewelry, watches and vintage fashion — are on consignment. Tom Ford and other beauty brands, along with accessories and home products, are not.

John Demsey, executive group president at the Estée Lauder Cos. Inc., said the relationship started in Barrett’s Bergdorf Goodman penthouse salon, which was populated by many of New York’s high-fashion and high-society women. Demsey said Hedges came to Lauder with a proposal to sell Tom Ford in the salons and he was “delightfully surprised” at the amount of merchandise sold through, considering that it was a hair salon, not a store. He didn’t say how much, but noted that the Ford brand is committed to the Barrett distribution.

Demsey pointed out that there is plenty of precedent where major brands were first sold in salons, including Bobbi Brown, MAC Cosmetics and Estée Lauder itself. As for the business model, the consignment deals are key profit generators because the 35 to 45 percent margins are much higher on the special merchandise than on salon services — which tend to top out at 15 percent, according to industry sources. Hedges had no comment.

He tends to describe the retail transactions as filling a need and making his customers happy. But there are subtleties to master. “It’s a delicate balance between solving problems and exciting [the customer]. I say, sometimes crassly, that we’re in the business of solving problems for the wealthy.”

He conceded that generally within the industry there has been a longstanding resistance from hairdressers, who see themselves as artists, not salesmen.

“They are artists,” he agreed. “But it doesn’t mean an artist can’t be in the business of solving problems for his or her client. If you say, ‘This color would just make your look pop’ or ‘If you get this hair-growth serum for your brows, it will just open up your eyes,’ that is problem-solving that is authentic and credible for a technician to do.”

After two decades at Bergdorf’s, Barrett has not only created a following but a constituency.

“These are very affluent, luxury-driven customers who come to us,” Hedges said. “[It’s] a business that has built a reputation with ladies from Texas, from Palm Beach, from Miami, from Jeddah, [Saudi Arabia,] from Oman, from London, from Singapore, from Taipei. The brand is so globally known and so pervasive in luxury — super luxury-affluent customers — that it’s amazing in its breadth and reach.”

The potential inspired Hedges to speculate that international expansion will focus on the Gulf States of the Middle East, Asia and London.

The interpersonal chemistry between staff member and client is what drives the operation. “It starts with how we treat one another,” said Hedges, “how you take care of yourself, how you treat your colleagues [and] how you treat the customer. The business comes from that.”

Barrett added, “We have a very careful training [program]. It’s called JB Cares. It doesn’t matter who you are interacting with — the housekeeper or the hairdresser. Everybody has a very caring, nurturing attitude. That all stems from the fact when I moved to New York, I was kind of shocked at the attitude that many hairdressers had, where they would keep you waiting. They wouldn’t listen to you. Generally the [customer’s] complaint is ‘he didn’t listen, or she didn’t listen.’

“A huge part of our training is to carefully listen, take your ego out of it,” Barrett continued. “There’s no question that the pampering and service has to be second to none, and then you can be in a luxury environment, where it can be like Maxfield, [in Los Angeles] where you see stuff and say, ‘Oh wow, I didn’t know I need that but I really need that.'[Staff members] are just there to help you, they are there to make you feel good and to make sure that your time is respected.”