The stylist has a new salon, new partners and a new approach to building his brand. 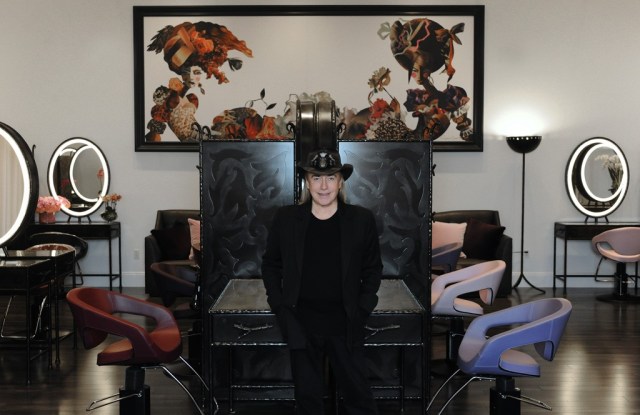 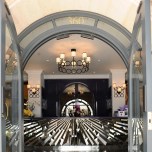 José Eber has a new salon, new partners and a new approach to building his brand.

After two decades on Rodeo Drive, the hairstylist felt it was time for a change and with the help of long-time client, the late Elizabeth Taylor, he secured the former home of Christie’s at 360 North Camden Drive in Beverly Hills for a two-level, 8,500-square-foot salon that opened this month. Reminiscent of luxurious Parisian salons Eber remembered from the beginning of his career, the space, designed with Waldo Fernandez, is high on glamour. There are towering ceilings, light-rimmed oval mirrors, dressers with wrought iron detailing to hide stylists’ product stashes, privacy screens and a sculptural mirror-covered reception desk. A hefty dose of purple on doors and chairs is an homage to Taylor.

The new salon is a full-service beauty destination. The main floor has 25 stylist chairs, eight shampoo chairs and three makeup chairs dedicated to Julie Hewett’s namesake cosmetics brand, and a yet-to-be-opened cafe. The salon uses Alès Group’s Phyto and its hair color brand Subtil. On the second floor, there are four medi-spa treatment rooms that will be used for injectables, laser and other aesthetic procedures by the Ko’an Center for Integrated Aesthetic Medicine; a room for semipermanent makeup by Micro-Art; a waxing room, and a nail enclave with three stations for pedicures and three stations for manicures.

“During a time when people play it safe, I didn’t play it safe. Women still want to be pampered,” said Eber, who remarked millions were poured into the construction of the salon. “We have doubled our budget,” he said.

Eber has scaled back the ambitions for his brand in some respects, though. Before the recession, he was on a path for growth that included José Eber salons all over the world and expansion into products in the hair care, skin care and fragrance categories. When the recession hit, he found those plans impractical. He also didn’t want to repeat past mistakes. At one time, Eber had about 15 salons and felt he spread himself too thin. “My presence in the salon is very important,” he said.

Last year, Eber opted for new partners in Greg Eger and Bob Granum of the Los Gatos, Calif.-based commercial real estate firm Granum Partners, who purchased a minority stake in Eber’s business for an undisclosed amount. The duo was convinced that Eber’s name recognition remains second to none when it comes to hairdressers and that it was underutilized. As proof, Eger pointed to Eber’s licensing agreement with Tol Inc. for styling tools that has resulted in sales of more than one million units globally. “It is sold worldwide, but the sales are stronger outside America,” said Eger. “That is what tells you that he is well-recognized throughout the world.”

Eger estimated the new salon would in a few years generate eight-figure sums annually “in the ballpark” of Eber’s previous 10,000-square-foot salon location at the Two Rodeo complex, although he declined to be more specific about revenue figures. Eventually, he and Eber envision creating a new José Eber hair care line and planting José Eber salons in a number of cities — Eber noted he would like a flagship in Europe — but they are in no rush. “He has been around and well-known for a long time. We have to work on getting him better known with a younger generation. That’s a big key,” said Eger.