As per the multiyear deal, she will be featured in the hair care brand’s first print advertising campaign. 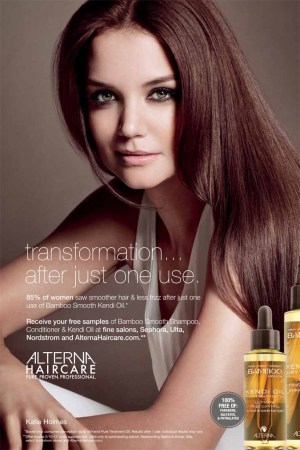 Katie Holmes is delving a little more deeply into the beauty industry.

Come February, the 34-year-old actress, who was named the first face of Bobbi Brown Cosmetics in the fall, will serve as spokeswoman and co-owner of hair company Alterna. As per the multiyear deal, Holmes will be featured in Alterna’s first print advertising campaign, which will roll out on the brand’s e-commerce site, launching mid-February, then to March consumer magazines. She will also provide the brand with input and insight on upcoming products and initiatives.

“Being an actress who emotes natural luxury and individuality and accessibility, this was the perfect opportunity for us to come together,” said Joan Malloy, president of Alterna Professional Haircare, adding that Holmes will also be utilized digitally and through social media. “Katie is a fashionista, a mother and an entrepreneur. In short, she is our consumer.”

For Holmes, the partnership was mutually beneficial. “I love that Alterna uses natural and organic ingredients and stays away from harsh chemicals like sulfates and parabens,” Holmes told WWD on Thursday. “It’s good for my hair and good for the earth, so I feel good using it.”

Additionally, Holmes said her healthy brunette locks have Alterna products to thank. “Alterna products have transformed my hair,” said Holmes, naming the Caviar and Bamboo lines as favorites. “I like to keep it simple. When it comes to hair, great style should be sustainable. Using the right products means you don’t have work as hard to look and feel your best.”

According to Malloy, what prompted the partnership was a recent article she read regarding Holmes’ personal and professional reinvention on the East Coast. “The article inspired me and got me thinking about Katie and how she was so synonymous with how I think of Alterna,” said Malloy, adding that Alterna’s headquarters (like its muse) moved from Los Angeles to New York in 2012. “Like her, this is a brand that has been very much around, but hiding in plain sight.”

Additionally, Malloy said, both Holmes and Alterna are in growth mode. “This is the year of transformation, not only a physical move but also our ability to claim our position in the marketplace,” said Malloy. “Katie is certainly allowing us a platform to deliver that message.”

According to Brian Krumrei, managing director and partner at TSG Consumer Partners, the brand — which is sold in Sephora, Ulta, salons and, most recently, on QVC, has been seeing sales increases for the past three years. “Business has been growing double digits every year since Joan and the current executive team came on board [in 2009],” said Krumrei, adding that Alterna has also recently expanded into Sephora Mexico, Singapore and Malaysia, and will soon be opening Brazil and India. “The business this year will have roughly doubled over the last three years.”

Although he would not comment on financials, industry sources believe the brand is approaching $100 million in retail sales, a number expected to increase by $15 million to $20 million in the next year.

Looking to the future, Malloy said the brand is working on a number of new launches, to be unveiled in early spring. Although she would not reveal details, Malloy hinted at the possibility of potential limited-edition accessories, created in partnership with Holmes’ fashion label, Holmes & Yang, to benefit charity.