The Age Perfect Renaissance Cellulaire range and Mousse Absolue are slated to launch in January. 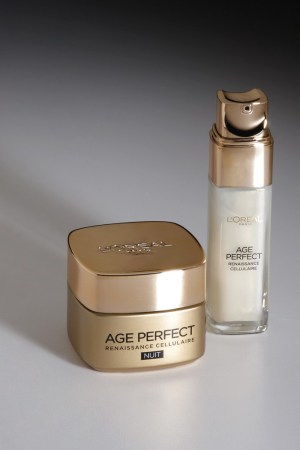 PARIS — L’Oréal Paris is starting 2013 with a bang, thanks to the January launches of a skin-care line for women over 50 and an “automatic” hair-color mousse collection.

In order to restart cellular vitality, epidermal mother cells (which give rise to other cells) need to be protected, energy must be brought to cells to maintain their metabolic activity, and a good intercellular communication has to be restored, according to Elisabeth Bouhadana, L’Oréal Paris scientific communication director.

To combat oxidative stress in mother cells, the new skin care products contain Natecium DHC, extracted from bitter orange peel. Another ingredient included is vitalline, culled from seeds and pods used in traditional Indian medicine, which can increase intercellular communication between the dermis and epidermis.

Julianne Moore is the face of Age Perfect Renaissance Cellulaire, which will launch this month in European countries including France, the U.K., Germany, Italy, Spain and Portugal.

Meanwhile, Mousse Absolue’s introduction is also to start in January.

“[It] will redefine the way we speak, see and perceive hair color,” said Rosa Carrico, vice president of global marketing for hair color at L’Oréal Paris, adding there was a time when innovation was all about complexity. “Times have changed. Today, we are in a new era where we deal with so many things. We juggle so many tasks, we process so much information that we search desperately for those products that just turn our lives a little bit simpler. Absolute simplicity is the new ultimate luxury.

“Over the past 10 years, it has been our obsession to turn hair color into a simple and pleasant experience,” she continued, describing the process as traditionally complex (involving mixing a colorant with a developer in a bowl or bottle). “Today, hair color becomes as easy as one push.”

With Mousse Absolue, hair color is created automatically, just as the formula exits the actuator, in a perfect dosage so it’s as easy to apply as a shampoo, according to Carrico. Further, if product remains in the bottle after a coloring, it may be used at a later point — for another application or root touch-up, depending on the length of one’s hair — since the aerosol packaging is sealed.

For Mousse Absolue’s 14 hair shades, L’Oréal Paris went back to the classics.

Mousse Absolue will be introduced in France in January, Germany in February and the U.K. in March. One bottle is to sell for approximately 12 euros (or $15.75) in France.

At the time when L’Oréal Paris presented its new product lines to the press, the L’Oréal Consumer Products Division (to which the brand belongs) also revealed information from some beauty product color-related studies.

“For us…color represents almost half of everything that we sell,” said Jean-Jacques Lebel, executive vice president and managing director of L’Oréal’s Consumer Products Division. “More importantly, color is very important for women.”

In its first such worldwide study, which was recently conducted and involved 12,000 women, 80 percent of respondents said color is important and more than 50 percent said it’s very important to them. People were asked such questions as: Do you use color? How important is color in beauty? How does color make you feel? What is your number-one color product? What type of color product could you not live without?

The answers varied by country. For instance, in terms of the emotional benefit from color, Brazilian women said it made them feel more attractive. In many European countries, people talked about being more feminine, and in China, they discussed feeling more confident.

Hair color is the key color product in most parts of the world, such as many countries in Europe, Latin America and in the U.S.

When it came to types of hues, “we found out that natural and nude shades were very important in most places, and with some [stockkeeping units], like in Latin America, where they’re very highly drawn to the vibrant and warm shades,” said Lebel.

Color is indeed buzzing. Each second, 235 beauty color products are purchased globally. In 2011, 7.4 billion units were sold, of which 1.9 billion were hair color.

The fastest-growing color segment is for the eyes, and the latest category to show rapid development is nail enamel.

“Now, nail enamel has surpassed lipstick in the world, and we think this is probably going to continue because there is so much innovation going into [it],” said Lebel.

An inventive color-related app created by L’Oréal Paris is called The Color Genius. The technology, which has already been rolled out to 10 countries, enables someone to take a digital photo of an item of clothing or an accessory for which they want cosmetics suggestions. It’s possible to decide if the product hue should match, clash or blend and also whether it’s for day — or nighttime wear. The app then gives recommendations including a nail polish, eye shadow and lipstick.

Overall, there’s been an acceleration of color product purchases over the past 14 years in geographic zones such as Europe, Latin America and the Middle East.

The facts suggest there’s nothing ephemeral about color.