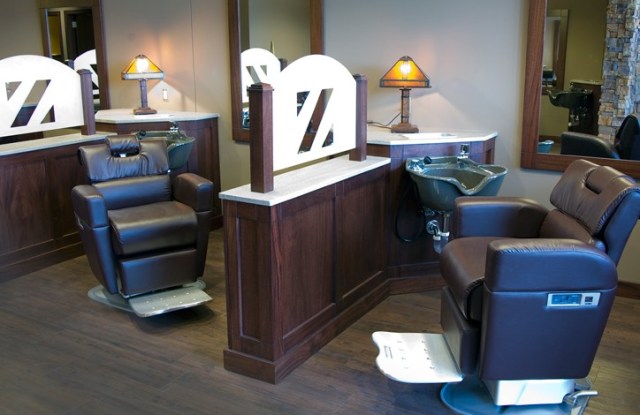 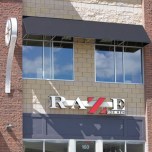 The rise in popularity of upscale men’s salons in the last decade has prompted salon giant Regis Corp. to get into the game with the creation of a concept for guys called Raze.

This story first appeared in the September 5, 2008 issue of WWD. Subscribe Today.

The firm opened its first Raze location, a 1,200-square-foot space that has a classic barbershop feel and features six haircutting stations, in Minnetonka, Minn., Aug. 8.

“Barbershops have been around forever,” said Mark Kartarik, president of the franchise division of Regis. “But 10, 15 years ago, these upscale men’s places started to pop up — The Men’s Room, Grooming Lounge, Rudy’s Barbershop. But we couldn’t figure out the scalability [of such concepts].”

Still, “We came to this idea that there’s an underserved male clientele out there.”

Kartarik was referring to the affluent young men that many independent, upscale men’s salons are targeting, but who are going to salons that are “primarily female environments.”

For instance, he estimated that about 30 percent of customers of Regis’ roughly 1,000 eponymous mall-based salons are men. “For us, it was intuitive that a lot of guys were getting their hair cut in an environment that doesn’t cater to them,” said Kartarik. He added that with Raze, Regis is targeting guys who will pay between $30 and $50 for services, saying, “We’re not talking to our $15 customers.”

To that end, Regis has equipped Raze, which is situated four miles from Regis’ Minneapolis headquarters, with brown leather barber chairs and dark wood floors. There are flat-panel TVs, a fireplace and wireless Internet access. Semiprivate haircutting stations are separated by cherrywood partitions topped with frosted glass and individual shampoo bowls are located within each station.

“We wanted to have the openness of an old barber shop, but enough privacy that if you’re getting your hair colored or a wax, it’s private,” said Kartarik. “It’s a compromise between a private room and being totally wide open.”

Haircuts start at $25 at Raze and coloring and highlighting start at $35. There is an essential oils-infused hot towel treatment ($5) and brow waxing costs $12.

In addition to three product display shelves, there are also dark wood and glass cases in which hair and skin care items are merchandised for retail sales. Brands highlighted at Raze include Lucky Tiger, Nickel, Jack Black, American Crew, Vitaman, Redken for Men and Nioxin.

Raze also carries Mason Pearson hair brushes, and, as part of what Kartarik describes as an additional service for guys who want to accessorize, the salon carries Armani sunglasses; Tumi wallets, money clips and passport cases; Bey-Berk cuff links, and other jewelry, like bracelets and necklaces.

Kartarik expects that three or four company-owned Raze locations could be operating by this time next year, with potentially many more franchised locations up and running by then. (He projected that about 10 existing Regis franchisees could commit to opening Raze locations in the next two months, with as many as 50 or 60 committing by the beginning of the year.)

“With some tweaks, we have something that is very scalable,” he said, noting that future Raze salons will most likely be larger than the Minnetonka prototype, ranging from 1,200 to 1,800 square feet, with seven to nine chairs.

Kartarik said he believes that roughly 500 Raze locations may be opened in the next five years and sees the optimal Raze salon base topping out at 500 to 800 locations in the U.S.

Of Regis’ 13,551 salons worldwide, 10,000 of which are in North America, about two-thirds are owned by the company. The firm, which operates salons under the Regis, Master Cuts, Trade Secret, Smart Style, Supercuts, Cost Cutters and Sassoon names, posted $23.1 million in profits for the fourth quarter ended June 30, a 17.9 percent decrease on sales of $709 million. Earnings for the year were up 2.4 percent to $85.2 million on revenues of $2.74 billion.