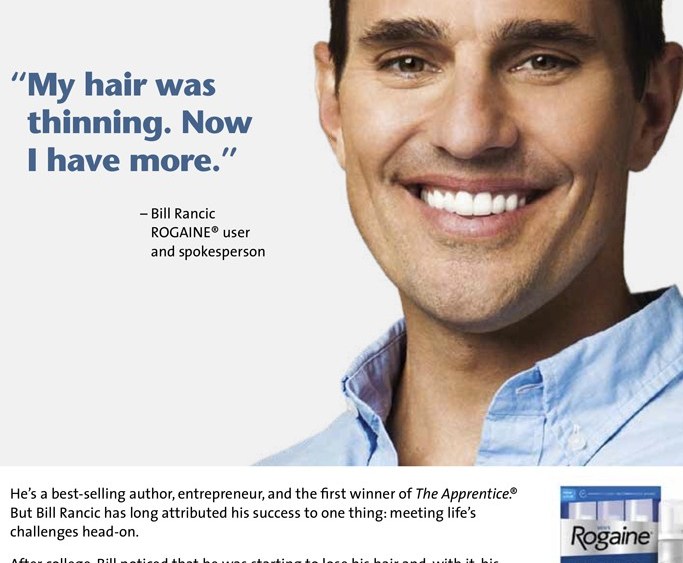 “Our vision when designing the new look was to create something that would contemporize the brand,” said Hugh Dineen, vice president of marketing for Johnson & Johnson Consumer Products Co. “With Bill, we’re attaching a celebrity face to hereditary hair loss, which removes some of the stigma.”

As part of the Rogaine relaunch, which includes more streamlined packaging for its Rogaine Foam for men, to be unveiled later this year, Rancic will be sharing his personal story of hair loss and offering guy-friendly “beauty” tips across all of his social-media touch points. “I want to help educate people and let them know hair loss isn’t something you have to live with,” he said. “Rogaine changed my life.”

For Rogaine, which originally launched in 1988 as a prescription-only product, the restaging is designed to make the brand more approachable to a new generation of men. “We’ve been steadily working to modernize the brand,” said Dineen. “We [also] wanted to make the can more visually appealing so that guys would feel comfortable keeping it out on their vanity or in their grooming kit.”

While speaking about his new ad campaign, rolling out in October and November consumer magazines, Rancic recalled using the product just after his days as an undergrad at Loyola University Chicago. He said it was about four years ago that he began taking Rogaine more seriously, applying it two times a day, every day.

“Giuliana [Rancic’s wife, television personality Giuliana Rancic] and I were looking at old pictures from before I really started using it,” said Rancic, who added that his hair while on “The Apprentice” was noticeably thinner than it is today. “The before and after was remarkable. I couldn’t believe it. Giuliana would kill me if I stopped.”

Dineen said the Rogaine team opted to tap Rancic, the first winner of “The Apprentice,” because of his authentic connection to the brand and role as a multifaceted, modern man.

“He’s found success in life, love and business, yet he’s still someone that men can relate to,” said Dineen. The appointment is just one of Rancic’s many gigs — which include motivational speaker, real-estate developer, restaurant owner and author. Also new dad to Edward Duke, born five weeks ago. Rancic said that he truly believes Rogaine can change people’s lives.

When it comes to his personal and professional lives, Rancic certainly has a lot going on, both on camera and off, but is surprisingly low-key about his jam-packed schedule.

For one, Rancic’s daily news magazine television show, “America Now,” which he hosts with Leeza Gibbons, just started its new season, and Rancic and his wife’s dating and matchmaking show, “Ready for Love,” produced by Eva Longoria, will launch on NBC later this winter. In addition, the sixth season of “Giuliana and Bill” has just kicked off on the Style Network. The two are also co-owners of RPM Italian, a restaurant in Chicago, with plans to expand the brand with more doors in the near future. Rancic has, in addition, written two books: “You’re Hired: How to Succeed in Business and Life” and “Beyond the Lemonade Stand,” and has coauthored one with Giuliana called “I Do…Now What?”

When it comes to working so closely on a professional level with his wife, Rancic said, “I always try to take the emotion out of the decision making with my different business entities, which can be tough, because it’s personal.” He added, “We are trying to use our show for good and not evil.”

Balancing all of this with parenthood seems a welcome change for Rancic.

“Little man will definitely slow the train down,” he said. “We’ve been planning for this for a while.”

For Rancic, keeping it all together comes down to a few life lessons he’s picked up along the way.

“Donald Trump taught me to never give up,” he said. “So many give up too early. They reach a roadblock and just give up. [Trump] instilled in me that fight, and that’s something I live off as well.”