Karnaze’s beard and camo may not scream beauty entrepreneur but it is the source of inspiration for his men’s grooming line. 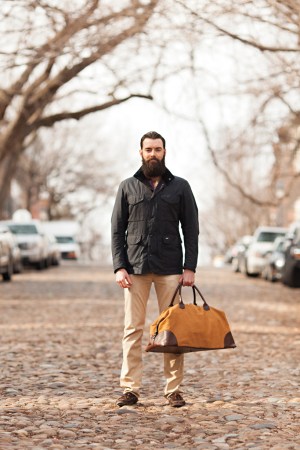 entrepreneur but, in fact, it is the source of inspiration for his men’s grooming line, Stubble & ‘Stache. After four years and two combat tours in Afghanistan with a special operations unit, Karnaze left the military and settled in D.C. to run an international simulation operations company. Then, a friend, Sergeant Justin Hansen, was killed in action. “I was growing my beard out for Justin’s funeral and I realized the need for a product that could pull double duty,” says Karnaze. He ditched his day job and created his first product, a combination face moisturizer and beard conditioner. “Men are familiar with facial moisturizers; guys with beards are familiar with beard oils,” he says. “The concept of something that does both was foreign.” Karnaze has since launched two additional products and plans to expand into a full-fledged skin-care line. Prices range from $22 to $54 and the line is currently sold on Birchbox and at independent boutiques and barbers in the U.S. Karnaze admits that one of his greatest challenges was simply learning the industry. “I went from a special operations and intelligence community into men’s grooming,” he laughs. “That’s not exactly a logical transition.” Karnaze has shown himself to be a fast learner. “Men’s skin care and grooming are trending in the right direction,” he says. “It’s definitely a growing space.”