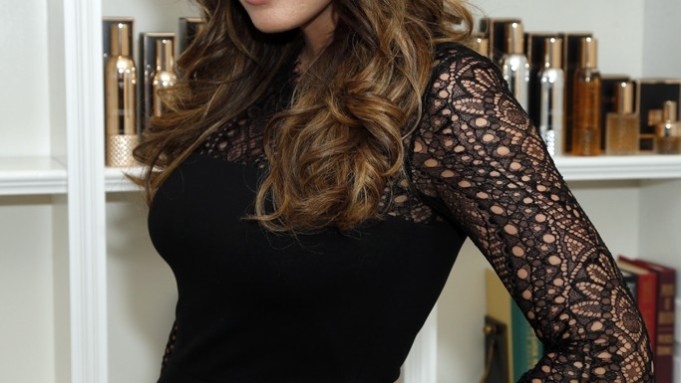 British socialite Tamara Ecclestone kicked off her studded Christian Louboutins while prepping for the New York launch of her hair styling line, Show Beauty, at the Peninsula Hotel—and for good reason. She’s expecting. “I just got married in June and I’m pregnant, so life’s exciting,” said Ecclestone Monday afternoon, adding that her recently divulged news was hard to keep to herself. “I found out really early which was so annoying because I wanted to wait past 12 weeks to tell people. I found out at like four weeks and was like, ‘Ugh! I can’t tell anyone.’”

Clad in an Emilio Pucci peplum dress, Ecclestone was all smiles at her launch event, held that evening at the John Barrett Salon in Bergdorf Goodman, despite not feeling 100 percent. “I’m still waiting to feel that whole pregnancy glow thing. I just feel sick,” she said. “I don’t get how people don’t know [they’re pregnant] because it felt like the end of the world.”

Despite all that’s going on in her personal life, Ecclestone said she has no plans to slow down promoting her new brand, which she introduced in the U.K. in March. The Formula One heir-cum-model and now business owner, who also appears in the Show Beauty advertising campaign, will travel to the Middle East in November and then Los Angeles to get the word out. “I’m going to try and do as much as I can because I absolutely love the product,” said Ecclestone of her $30 to $65 “volumizing and finishing” hair range, which launched exclusively to Bergdorf Goodman on Tuesday. “In my mind there was a real gap in the hair care market in terms of a luxury product. A lot of [existing hair care] looks very standard so I wanted to do something completely different,” she said. “Also I don’t ever wear perfume because it gives me a headache so that was the idea behind doing a hair fragrance.”

The scent, which Ecclestone described as “a bit like dessert, like crème brulee, a bit like holiday,” is the first hair product fine fragrance created by Givaudan, according to the brand’s chief executive officer Scott Harvey-Nicholls. Additional products in the 11-piece Show lineup, formulated by Maesa, include a volume lotion, dry shampoo, thickening mist and a treatment oil. “I get my hair done if I’m going out or to an awards show or to an event but real women don’t have time to do that so I wanted products that people could use on themselves,” said Ecclestone, adding that she is also eyeing the men’s grooming market. “When I have a bad hair day I tend to hide under a hat.”