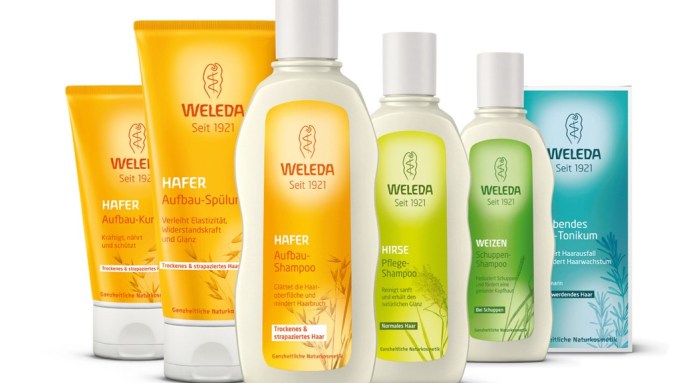 BERLIN — The Arlesheim, Switzerland-based natural cosmetics company is relaunching its hair-care offering, introducing a natural grain-based lineup of organic cleansing and care products free of sulfates and silicones. The range, which took three years to develop, represents a cohesive launch in the category for Weleda, which has previously had no consistent hair-care presence across international markets.

Two existing Weleda treatment-oriented hair and scalp products will be relaunched, Rosemary Hair Oil (for brittle hair), and Rosemary Hair Tonic (for thinning hair). They have both had the same recipe since being developed in 1921. An existing Chestnut and Rosemary shampoo sold in many markets will be replaced by the new line.

Weleda’s new hair-care products hit shelves in Germany, Austria, Switzerland, France and Spain in March, and are currently rolling out in Italy. The products will enter the Benelux countries in July; reach Spain, Japan and Brazil in September, and bow in the U.S., Chile and the U.K. in October.

The U.K. is the only market to have an existing full line of Weleda hair care; the three essential oil-rich shampoos and conditioners will be phased out in tandem with the new product launches this fall.

Weleda products perform best in the countries where they are manufactured — Germany, France and Switzerland. However, sales have been boosted in recent years in the Americas.

The company has turned itself around after 2011’s after-tax loss of 8.3 million euros ($11.57 million) driven partially by sluggish sales of natural medicines, which it also manufactures. In 2012, Weleda’s total sales grew 5 percent to 324 million euros or $416.5 million. Natural cosmetics, which make up 70 percent of the firm’s revenues, had a sales uptick of 6 percent, rising to 227 million euros last year, some $316.5 million. All dollar figures are calculated at average exchange for the period. Looking at the current fiscal year, Weleda says it estimates growth of 2 percent in 2013.