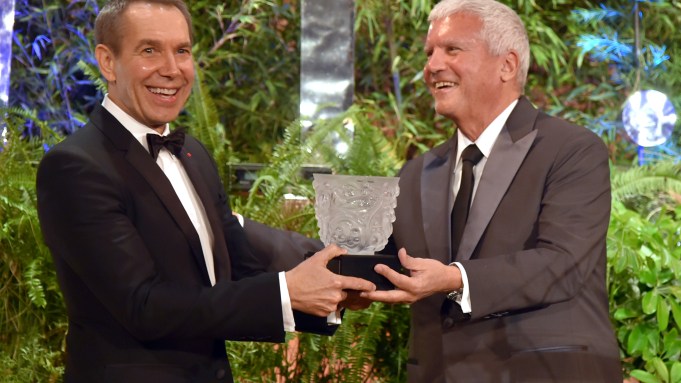 The annual Trophée des Arts gala dinner that raised an expected $1.3 million was held at the Plaza Hotel in Manhattan Friday night to support the educational and cultural programs of the French Institute Alliance Française. But the event seemed to double as a marriage between art and beauty, with Jeff Koons receiving the Trophée des Arts award and Jean-Paul Agon, chairman and chief executive officer of L’Oréal, being given the Pilier d’Or.

“Beauty and art are two aspirations that converge on the same ideal,” Agon noted in his acceptance speech. “The ideal of expression. Expressing who you are, what you want to be and what you want to say and show to the world.”

Turning to Koons — whom Agon had praised as an iconic trailblazer and genius disruptor — he said, “Jeff, you once said, ‘Art is a vehicle of acceptance.’ Indeed, Jeff, we share this same passion, since beauty products are also a tool of self-esteem and empowerment. We both seek to make life more beautiful for all.”

Before the program began, Koons said he has had a long connection with French culture. “The first time I ever exhibited in a museum was in France….in Lyon. So I have had an ongoing relationship with France. Even my first understanding of the power of art came from Manet from the appreciation of the avant-garde and starting in 19th century France.”

He elaborated during his acceptance speech, recalling how he was able to participate in FIAF-sponsored art and drawing programs when he was young. ““When you are able to help educate children through the arts it connects them and connects them to learn that they can accept themselves as human beings,” he said. “Once you can accept yourself, you can go out into the world and accept other people.”

His first art teacher had showed a slide of Manet’s “Olympia,” and all the elements of the painting and its importance in 19th century France made an impact on him. “I realized how lucky I was to be involved with art because it so effortlessly connected me to all the human disciplines. I could be involved in philosophy and psychology and aesthetics,” he recalled.

“I have to thank French culture for having heroes like Manet and the type of love that Manet would show to Goya and the type of love that he showed to Valesquez and that everybody would give to each other. They found something greater than themselves to believe in. That gave them the ability to expand their parameters and they shared that with us. If I have become a better artist, it’s because of this French heritage.”

Another theme of the evening was the history of Franco-American affinity and cross-cultural dynamics. Agon’s award was presented by Kenneth M. Jacobs, chairman and ceo of Lazard Ltd. and Lazard Group. “Jean-Paul is an inveterate world traveler. He knows that every culture has an instinctive approach to beauty, according to its history and its heritage. Jean-Paul could be satisfied with all that he has achieved, but instead he is driving the creation of a new L’Oréal. The new L’Oréal is universal and multicultural.”

Among its other achievements, “L’Oréal has set the pace for gender equality in business and science today,” Jacobs said. “Women represent more than 40 percent of senior management and almost half of its board of directors.”

During his acceptance speech, Agon underscored that L’Oréal’s strength is derived from its international portfolio of not only French and American brands but also influences from the rest of the world. “You could say, we are the worldwide Alliance for Beauty,” he said with a smile. “Beauty is multicultural. Just like art.”

During the earlier interview, Koons touched upon his present outlook. “I’ve been trying to make works that can communicate as profoundly as possible,” he said. “I’m 61 now so I think I’ve hit my mature stage. I really want to take advantage of the opportunity to make gestures. I have a platform where I can have a meaningful effect and I don’t want to waste it.”

Koons brushed aside questions about his legacy and what critics and historians may think of his work in 100 years. “I really don’t think I’m thinking about my legacy. I’m thinking about I want to enjoy life today. I want to have the greatest experiences possible through my art. I’m not really concerned with after I’m gone, other than the moment I have to just take advantage of it and to do the best I can, to reach the highest standard.”

Typical of a New York fund-raiser, the evening wasn’t complete without a live auction. Larry Gagosian, who later presented Koons with his award (“He is an artist of incredibly subtle innovative intelligence, but also an artist that touches people all over the world”) got the auction rolling with a winning bid of $8,000 for a magnum of Cheval Blanc from Bordeaux.

Agon, who had credited his new wife Sophie and her passion for art in helping him develop a sharp, more sensitive eye, also entered the fray by bidding on two Koons art works — a plate and a vase — which were accompanied by a commentary from the artist. The bids went back and forth, then hovered around $22,000, prompting Agon, the winner, to end the contest by taking the gavel from auctioneer Adrien Meyer and banging the table with authority, breaking his plate in the process.