Three years in the making, Ahava Dead Sea Osmoter Concentrate, which launches in August, has arrived just in time for the brand’s 25th anniversary. 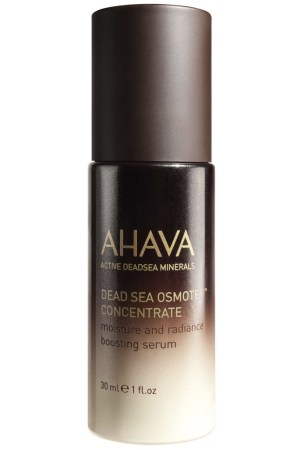 For Ahava, there’s a new hero in town.

Three years in the making, Ahava Dead Sea Osmoter Concentrate, which launches in August, has arrived just in time for the brand’s 25th anniversary.

“We felt as if Ahava was lacking a signature product,” said Elana Drell Szyfer, chief executive officer of Ahava worldwide. “What we’re creating with Dead Sea Osmoter Concentrate is a hero product.”

The product’s main ingredient, osmoter, is not new to Ahava. In fact, it is included in every product since the brand launched in 1988. According to the brand, osmoter, a blend of dead sea minerals, draws moisture and nutrients from deep layers of skin and brings it to the surface.

According to the brand, Dead Sea Osmoter Concentrate harnesses three times the osmoter found in any other Ahava products and because of the intensified concentration, the brand claims to offer more benefits to skin, including increased skin clarity.

To achieve its antiaging results, the formula’s main ingredient targets two cellular functions, one in charge of increasing water channels and another that repairs damaged cells. In time and with exposure to the sun, these functions are slowed down.

“This is really part of an evolution for the brand’s strategy to grow significantly in the U.S. market as well as globally, particularly in skin care,” Szyfer told WWD. “It’s a unique way to bring the story of the brand and proprietary technology together and deliver it to the customer.”

Industry sources estimate that Dead Sea Osmoter Concentrate could do as much as $5 million in the U.S. and $10 million internationally the first year on counters.