It took two years to get the products in the Alicia Silverstone Collection for Juice Beauty up to snuff ecologically. 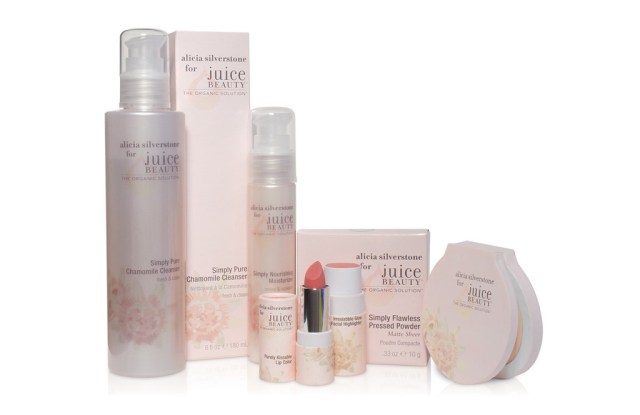 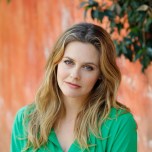 Alicia Silverstone and Juice Beauty share a mission: to make women look beautiful without making the earth less so.

The actress, who is an outspoken advocate for green living, and the San Rafael, Calif.-based beauty brand have collaborated on a collection of five skin care and makeup products priced from $16 to $36. The collection started rolling out at Ulta stores nationwide on Sunday, which was Earth Day. Industry sources estimate the products will generate $2 million in first-year sales.

Silverstone is the first celebrity officially connected to Juice Beauty. “She has effortless beauty,” said Karen Behnke, founding partner and chief executive officer of the brand. “The Juice Beauty girl is similar: quick and easy. They don’t want harsh chemicals, but they want to feel glamorous.”

For Silverstone, who has an ongoing partnership with EcoTools as well, the decision to associate with a brand boils down to its commitment to environmental principles. “This is who I am. This is not just something I’m slapping my name on,” she said. “I would never align myself with something that I don’t 100 percent believe in. I think people count on me for that, and I take pride in that.”

Behnke said she hopes Juice Beauty’s products with Silverstone “could eventually achieve a double-digit percent of our business.” At the moment, that business in North America is spread out across 450 Ulta doors, 225 Whole Foods doors, 25 Pharmaca doors and 125 doors of prestige and masstige outlets such as Murale and Bluemercury. About 25 percent of Juice Beauty’s sales come from abroad. The brand has a strong presence in Asia, where the collection with Silverstone will launch by June.

Silverstone vetted products while she worked. Once last September, for instance, Behnke toted 75 different aromas to Silverstone’s trailer on the New York set of “Gods Behaving Badly,” a movie that also stars Sharon Stone, Christopher Walken, John Turturro and Edie Falco, for the actress to sniff. “She was involved every single step of the way and had a ton of opinions. I would leave her with aromas and textures, and she would e-mail all her thoughts. She was very, very specific,” Behnke.

The trick, according to Silverstone, was to get the products to smell and feel the way she liked and, at the same time, be effective. “I am a smell person. So, I was looking for a super yummy smell,” she said. “I did so many smell tests, it was pretty funny. The texture is really important to me, too, and, obviously, the performance, but I was pretty confident in the combination of ingredients. There is the clinical part of making it work on your skin. Once that part is handled, the fun part is the smell and the texture.”

Silverstone, who set off a media firestorm recently by posting a video on the online hub The Kind Life, a name taken from Silverstone’s 2011 book, “The Kind Diet,” of her feeding pre-chewed food out of her mouth to her son, doesn’t regret being vocal about her lifestyle choices. When she started to be open about them, she was advised her frankness would hurt her career, but her experience has been the opposite. “I am living my truth and what I believe in, and I am actually able to support myself doing what I love,” she said.

Acting has never been off of Silverstone’s agenda. She may be most recognized for the 1995 film “Clueless,” but she’s busy this year introducing herself to audiences in new ways. She has a guest-starring stint on the ABC television show “Suburgatory” that started airing April 18, and has several movies in the can, among them “Vamps” directed by “Clueless” director Amy Heckerling with Krysten Ritter, Sigourney Weaver and Richard Lewis, and “Butter” with Jennifer Garner, Hugh Jackman, Ashley Greene and Olivia Wilde.