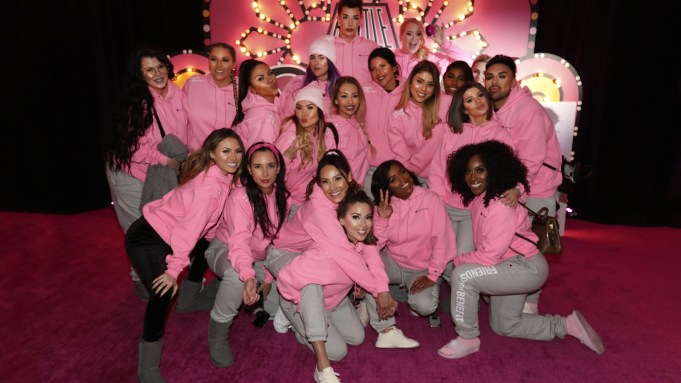 Benefit Cosmetics is serious about influencers.

So serious that the LVMH Moët Hennessy Louis Vuitton-owned brand is said to be spending in the “ballpark” of $10 million on influencer programs to support the global rollout of Badgal Bang Volumizing Mascara, Benefit’s third mascara that launched Thursday. The amount is strictly dedicated to influencer activations and marketing and doesn’t include online advertising or paid social media efforts.

Clearly, there’s a lot riding on this launch.

According to an industry source, who called the goals for the single product ambitious, Badgal Bang is projected to do more than $100 million in retail sales globally in its first year, with half of that coming from the U.S. Susan Kim, senior vice president of U.S. marketing at Benefit Cosmetics, declined to comment on marketing spend or sales projections.

“We’re already known for mascara. We have the number-two and number-three [best-selling] mascaras in the U.S.,” said Kim, who noted that differentiation in the influencer marketing arena is essential because of a surplus of “competition in this very crowded space.”

To beat out that competition, Benefit deployed a full-scale influencer campaign on Thursday, driven by a series of 15 global experiences. It started with four headlining events this week in the U.S., Maldives, Dubai and China, where the mascara was unveiled at 1 p.m. EST in the U.S., which is the same time the product became available online globally. The Dubai event had the most guests — 200 influencers and members of the press from the Middle East showed up to the BadGalaxy Party at Molecule, a new restaurant in the Dubai Design District — followed by the Maldives, where 62 influencers from 18 countries were put up in different resorts throughout the country. Beginning next week, a series of 11 local events will take place in rapid succession in the U.K., Brazil, Colombia, Hong Kong, South Korea, Taiwan, Australia, New Zealand, Singapore, Malaysia and the Philippines.

In total, Benefit has tapped 800 influencers from 22 countries with about 500 million collective followers to support the introduction of Badgal Bang — a lengthy process that started with influencer outreach in the third quarter of last year.

The theme of outer space is woven throughout every experience in every country, designed to tie into the weightless, aerial particles derived from space technology that the $24 volumizing mascara is formulated with. The outer space concept also led to matte black futuristic packaging, and even the name of the product, said Julie Bell, executive vice president of global marketing and product innovation at Benefit.

Bell called Badgal Bang, which took almost four years to develop from concept to completion, the next generation of the original Bad Gal Mascara.

“We do three things: we work on formula; we work on the brush, and the secret weapon is the wiper and how they are integrated together,” said Bell, who is hosting the event in the Maldives.

For North and South America, Benefit unveiled the mascara by way of a group of 32 U.S., Canada and Latin America-based influencers who gathered at Utah’s luxe resort Amangiri this week for a three-night, all-things-Benefit getaway. Nicole Guerriero, Nikki Tutorials, Krystal Sutherland, Mari Maria, Yasmin Maya, Desi Perkins, Ani Goulayan, Ellarie Noel and Katy DeGroot were among the guests greeted with a pink carpet by Benefit handlers in branded pink uniforms on Tuesday before boarding private Bene-jets in Los Angeles or Las Vegas and being whisked to Canyon Point, Utah.

“Everything will have that branded moment,” Kim said of the inside of each of the chartered planes, which are decked out with “special pink touches,” from Benefit headrests to pillows. “Bene-captains” were even outfitted in Space-Age bomber jackets.

Daily activities — as well as designated downtime so influencers could create content — included a game show, “Battle of the Brow,” where the group came to a set “that’s straight out of a Seventies game show,” clad in pink sweatsuits and divided into teams to compete in eyebrow themed trivia. Jared Bailey, Benefit’s global brow expert, also did “brow house calls” for guests and shared the brand’s augmented reality Brow Try-On tool that launched last month. (The technology uses actual hair detection on a user to manipulate existing brows to show what a dozen other styles might look like in varying shades, thicknesses and other attributes.) Bailey, along with Maggie Ford Danielson, Benefit’s global beauty authority, hosted the event.

The trip culminated with the big reveal of Badgal Gang Mascara, where the group was finally able to use their social media followings to spread the word to their millions of combined followers. Kim said influencers were welcomed by a large rocket ship and astronauts walking around handing out the product, which was unveiled on a “huge billboard” built in the desert.

Kim couldn’t comment on financials, but a source in the digital space estimated that digital marketing spend for Badgal is more than double that of the Brow Collection, Benefit’s most significant influencer program up to this point.

Kim elaborated on Benefit’s social media plans, too, both of the organic and paid variety. In the hours leading up to the reveal, she said the brand is completely blacking out its own Instagram feed and “making it seem like all of our posts have disappeared.” The feed will look like a tile of black posts, but if followers zoom in, they will see that “it looks like they’re in outer space” with items hidden in posts designed to elicit engagement. At the same time, benefitcosmetics.com will be taken over with an outer space theme where visitors can interact with a virtual astronaut. But there was no mention of Badgal Bang or any new product until the official launch time.

Kim maintained that the brand is continuing to leverage Facebook and Instagram to drive awareness, with an emphasis on Instagram — past efforts have relied more heavily on Facebook. Benefit will test paid media on Instagram Stories for the first time in various formats, from highly produced videos to ones that mimic someone’s native Instagram story, featuring something as simple as a woman testing out the mascara.

In May 2016, the brand hosted its first global influencer event in Las Vegas to introduce the nine products. Between May 13 and June 24 — the kickoff of the trip and the day products went on sale, respectively — 90 influencers from more than 20 markets published 848 posts that amassed 387 million impressions during the six-week period.

These efforts reportedly drove a 30 to 40 percent sales lift for the range, year-over-year, in its first six months, but one element of the strategy proved to be problematic. The six-week lag time from event to when the Brow Collection actually hit retailers left customers frustrated that they were unable to buy any of the products they were seeing all over social media.

This learning shaped the launch strategy for Badgal Bang, where the influencer launch event was designed to take place at the exact moment the mascara becomes available online, at Benefit’s digital flagship benefitcosmetics.com and the e-commerce sites of partnering retailers, from Sephora to Ulta and Macy’s.

This was not an easy task, according to Kim, who said a number of moving parts needed to align to ensure that consumers could buy Badgal Gang the second their favorite influencer posted about it Thursday.

“That is hard to do. We have to get the field excited, we have to get retailers excited. It means product has to be ready right then, without them [retailers] having necessarily opened it [beforehand],” Kim said.

Unlike brows, though, mascara requires less education because it’s a single product versus nine products that could come in as many as six shades — not to mention eyebrow shaping, which is another issue unto itself. This gave Benefit confidence that a simultaneous influencer reveal, coupled with a retailer launch, could be seamless.

“It’s a mascara; it’s one of the most highly penetrated categories in beauty; it’s the thing everyone knows how to apply. We didn’t think we needed an explosive education piece,” Kim explained.

“I think having it in these regional areas makes it a bit more personalized for attendees, but we also want to make the event bigger by inviting more people and finding a venue to accommodate them, which was difficult to do in one place. We also invited plus-ones [this time],” Haba said.

He explained that the Maldives was a “relatively easy” distance to travel for those located in Europe and Southeast Asia, and Dubai was convenient for Middle Eastern influencers, as well as a handful of invitees from South Africa.

“China’s event we did separately because a lot of the influencers from Hong Kong and Taiwan, many of them don’t speak English so we just wanted to make sure it’s a good event for everyone involved. We really expanded the list for those countries,” Haba said, noting that venues in each region were “basically bought out.” This was to ensure that there would be no other guests around, allowing influencers to relax and “not feel like they’re on display” for the duration of the event.

Local events, taking place in the next week, will vary from country to country, according to Haba. Experiences will take place over the course of hours (instead of days), where 30 to 50 local influencers will attend and share the experience socially. In the U.K., for instance, guests will be greeted by pink astronauts at The Old Cochrane Theatre in London and served pink Champagne cocktails and “out of this world” food before a space pod lands carrying Lisa Potter Dixon, Benefit U.K.’s head makeup artist and national brow artist, who will reveal Badgal Bang. On Jan. 30, Benefit teased the event with a “pink astronaut landing” where 15 pink astronauts “landed” in London to generate buzz for the launch.