“It’s just silly,” she said over the phone, while home in New York. “It was a made up, manufactured thing, and so I didn’t feel like — I mean, first of all, it’s just a job. And I feel like model fills the experience and the job perfectly well. It didn’t need a capital S or a super in front of it. If anything, I wanted to always have the option to be outside of it and to do other things. So, to me, the more lower-case M, the better, in terms of my future choices.”

There’s humor behind her words. Soft-spoken and relaxed, she laughed as she shared the thoughts. “It is what it is,” said the California native.

During her rise to fame in the Nineties, while still modeling, Burns turned her attention to education. She graduated from New York University and later Columbia University with a master’s degree in public health, which she applies today in her work for Every Mother Counts. The nonprofit, which she founded in 2010, aims to improve maternal health and make pregnancy and childbirth safe for all women. During the pandemic, the organization has been busier than ever creating guidelines and resources for soon-to-be mothers.

It’s been a “purposeful” time for the charity amid the crisis, she said.

“On the other side, I’ve been parenting two teenagers,” she added. While now on summer break from school, her kids had been working remotely from home. “I’m not looking forward to the probability of returning to that in the fall, when we’re all fighting for Wi-Fi and space,” she said.

While she’s dabbled in and out of modeling jobs throughout the years, there’s one particular partnership that has been a constant in her life: her role as the face of Calvin Klein’s Eternity campaign, which began in 1988. 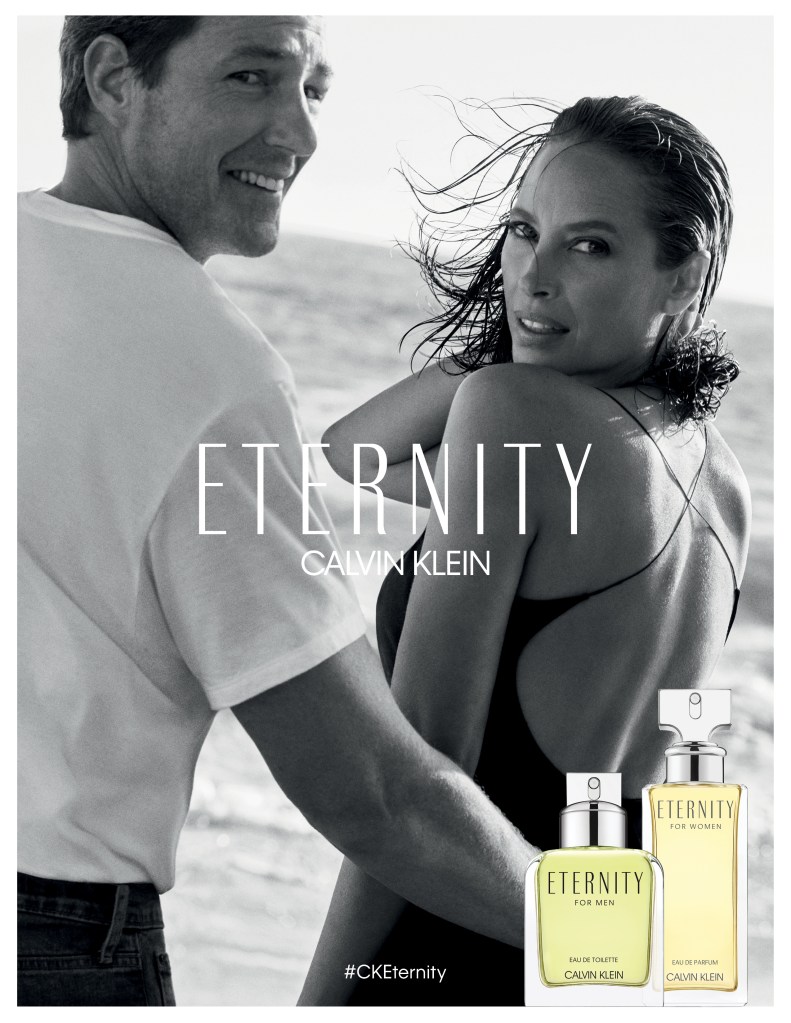 Of all the ads, 1995’s photographs by Peter Lindbergh are perhaps the most well-known. Shot in Hawaii, they feature Burns and a male model portraying eternal love, a message behind the women’s and men’s fragrances. Then, in 2014, Burns’ husband Edward — the actor, producer, writer and director — stepped in as love interest for Inez and Vinoodh’s version in Turks and Caicos. Now, the celebrity couple revisit that moment in a new campaign, shot by photographer Lachlan Bailey and director Matt Lambert on yet another beach; This time, it’s in Malibu, Calif.

“This idea of eternity and of something that lasts and endures being the centerpiece of the campaign is not lost on me during this period,” shared the model. “So many of us have wanted to look back and go back to simpler times.”

While the two signature Eternity fragrances have remained the same, the brand has released a new line extension, a floral, fruity scent for “Eternity Eau Fresh” for women and an earthy “Eternity Cologne” for men, priced at $95 and $85, respectively. Released on a rolling basis since Aug. 1, the perfumes are currently available at Macy’s.

On the business end, the strategy for all fragrances during the pandemic has been to prioritize the “icons of the market,” said Simona Cattaneo, president of luxury brands at Coty (whose portfolio includes Calvin Klein Fragrances). “Eternity is one of the icons.”

As consumer behavior is changing, “in a crisis such as the one we are living in, you go back to icons, you go back to safe products…meaning valeur sûre, the icons of the market that you know,” Cattaneo continued, calling from Paris. “For today, [with the new campaign], we needed to bring forward a more joyful, playful and optimistic expression of this eternal love.”

As a real-life, “modern and multifaceted” couple, the Burnses bring authenticity to the story, she added. “It’s not scripted.”

Fragrance has maintained a “very important category,” Cattaneo said. “It’s true that we’re going through difficult times, unprecedented times when it comes to fragrances. What is interesting is that e-commerce is booming, even for fragrances. And we are creating the new norm.”

That includes exploring new options for in-store testing. “As always in crisis, there are learnings,” she continued. Though she stayed mum on details, she added: “We are completely changing the consumer experience.”