In between runway shows and editorial shoots, the makeup artist is quietly building a makeup empire. 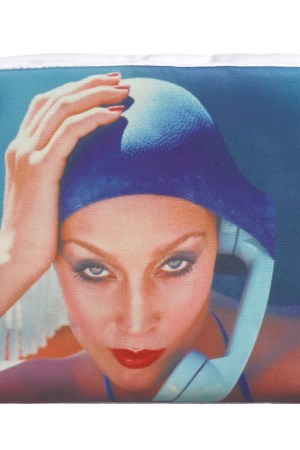 In May, Tilbury will launch Eyes to Mesmerise, six shades of buildable cream-to-sheen eye shadows. “Each is inspired by a beauty icon who captivated the world through the power of her mesmerizing eyes,” said Tilbury. Respectively, they are Cleopatra, a smoky peacock; Norma Jean, a shimmering gold-champagne; Marie Antoinette, a golden mink; Veruschka, a khaki gray; Bette, a burnished chocolate, and Mona Lisa, a warm amber-bronze. Each is $32.

In July, Tilbury, a longtime fan of Norman Parkinson, will launch a limited-edition collection featuring the late photographer’s images. “These compacts and bags are literally the only time Norman’s prints will ever be printed and sold commercially, so they’re a covetable collector’s item as well as a beauty must-have,” said Tilbury. “The collection not only immortalizes Norman in makeup form, but captures his vision of beauty. He was an alchemist with light, capturing the sun and the differing effects of mood-lighting on the skin — everything’s soft-focus and dreamy. I always approach everything from the perspective of ‘what effect do I want to create?’ In this instance, I wanted to create compacts with beautiful images, but I also wanted to capture a part of that world and bring that into the makeup collection.”

Tilbury headed into Parkinson’s archives, examining more than 3,000 prints and several hundred transparencies before choosing the images that will appear on Filmstar Bronze & Glow Sun Tan & Sun Light, an $80 highlighting/bronzing compact infused with apricot seed oil and soft-focus polymers; On Call Makeup Bag, $45, which features a 1975 British Vogue image of model Jerry Hall; The Bathing Beauty Bag, $80, which features a shot of a swimsuit-clad Hall taken in the Black Sea in the Soviet Union; Dreamy Glow Highlighter, $65, a subtle highlighter with soft-focus polymers with a compact adorned with a shot of model Carmen dell’Orefice; Colour of Youth Lip & Cheek Glow, $58, which has an image of Forties star Wenda Parkinson, the photographer’s wife, and two shades of the new Matte Revolution Lipstick, in 1975 Red, an orangey-red, and Miss Kensington, a rose-pink, each $32. The balance of the Matte Revolution line rolls out in the U.S. in September.

In September, Tilbury’s Matte Revolution lipstick line will officially debut. Tilbury is currently previewing the shades on her Web site. Tilbury calls the formula — which gives the illusion of fuller lips — “the matte lipstick of the future.”

“So many matte formulas look like car paint — just flat and in the lines,” said Tilbury. “This creates lips that look lit from within, almost like a Thirties photograph. I’ve been working for years to create a product which combines a trick I use all the time on photo shoots, using lighting trickery, pigments and powders. Now everyone can create this full, matte lip effect in a long-lasting, buildable, hydrating formula.”

The formula features new-generation 3-D glowing pigments for lips that look lit from within and an optical “matte-trick” to create the appearance of wider, fuller lips. Enriched with orchid extract for antioxidant, SPF protection and hydration and seed extracts from “The Lipstick Tree,” a plant extract that is exclusive to Charlotte Tilbury, Matte Revolution does not dry the lips and stays put, said Tilbury. “It has the feel of a nourishing balm, but is power-packed with pigments for a high-performance finish that enables you to build up color from a stain to a full block of pigment,” she said. Lipstick Tree and orchid extract are intended to soften, protect and hydrate lips for younger-looking, healthy lips, while 3-D glowing pigments create the illusion of lips that appear wider and fuller. The square, angled tip mimics the shape of a lip brush, to make it as easy as possible to achieve precise application.

The 10 shades coming in September are Lost Cherry, a pastel fuchsia; Sexy Sienna, a golden coral inspired by Sienna Miller; Amazing Grace, a vintage tea rose inspired by Grace Kelly; Birkin Brown, a soft brown inspired by the handbag of the same name; Glastonberry, a sheer black currant inspired by Rihanna; Bond Girl, a natural berry shade which is a favorite of Amal Clooney; Red Carpet Red, a ruby shade and a favorite of Kate Moss; Walk of Shame, a berry-tinted rose; Love Liberty, a wild rose inspired by Liberty Ross, and Very Victoria, a taupe-nude inspired by Victoria Beckham. Each is $32.

In the U.S., Tilbury’s products are stocked in Nordstrom and Bergdorf Goodman, and on Charlottetilbury.com, nordstrom.com, bergdorfgoodman.com and Net-a-porter.com. While Tilbury declined to discuss sales projections, industry sources estimated the products could do $10 million at retail in their first year on counter.