The Unilever-owned brand has a new redesign to mark its retail distribution that will begin in October at Walmart.

A look at Dollar Shave Club's old and new logo

Dollar Shave Club unveils today a new look to mark its next chapter as an omnichannel grooming brand.

The Unilever-owned brand is approaching its 10-year anniversary with a new redesign, complete with new logo and color palette to signify its evolution, as well as using the acronym “DSC” in place of Dollar Shave Club. The acronym sits prominently in bold letters, while the full name pops in coral on a navy background. The packaging has changed to reflect the new look, as will DSC’s web site, social media, e-mails, app and all digital channels. DSC will also debut a new campaign in 2021.

The brand is also hitting retailers for the first time, beginning at Walmart in October and in January at more than 10 national mass, drug store, grocery and value retailers including Target, Walgreens, Rite Aid, and Safeway among others.

Founder Michael Dubin said the shift to omnichannel was in the works since the brand’s $1 billion acquisition by Unilever in 2016, but the conversation became serious in early 2019.

“Being a digital-only brand doesn’t reach everyone with the mission to be their best selves,” Dubin said. He believes the “death of retail” is overstated and the channel is actually changing. He added that 68 percent of consumers prefer to buy razors in stores, and DSC is primed to reach these consumers as the number-two brand for non-disposable razors for men in America. 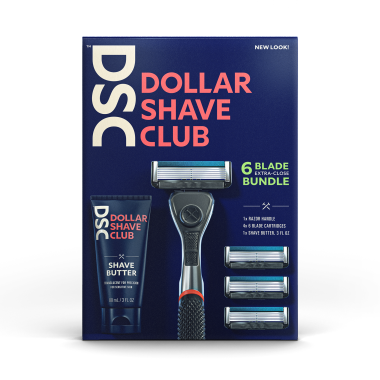 Dubin considers the brand’s new look to be the perfect time to evolve as men are “becoming more fluent in the language of grooming,” he said, and spending more time on their grooming routine than they did five to 10 years ago.

Many direct-to-consumer men’s grooming brands spoke about grooming and beard maintenance products skyrocketing toward the beginning of lockdown due to the pandemic. DSC experienced this as well, and Dubin expects this to continue as they the brand expands its distribution.

“We’ve been online only and we believe in order to be successful, brands of all kind need to be thinking omnichannel,” he said. “It was the right time for our brand to evolve as we expand distribution significantly. It’s an evolution and we’re super pumped about it.”