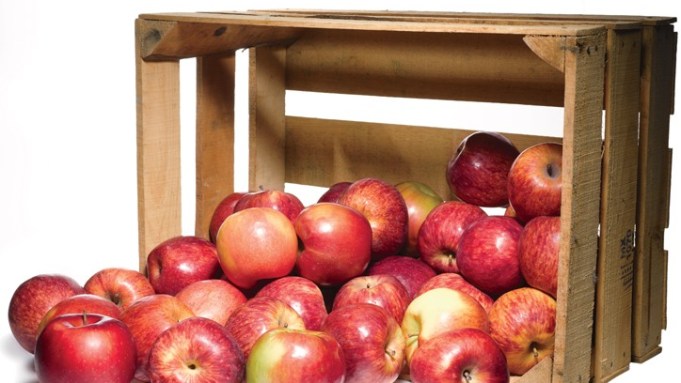 Apples are a recurring—and enduring—symbol in literature, oftentimes depicted as magical and sacred. In Greek mythology, golden apples were blamed for the start of the Trojan War, and it is widely accepted that the apple was the forbidden fruit that caused Adam and Eve’s banishment from the Garden of Eden. In 1665, Sir Isaac Newton discovered the laws of gravity after witnessing an apple fall from a tree, and in 1904, fruit specialist Professor J.T. Stinson famously said, “An apple a day keeps the doctor away.”

Frank Browning, the author of Apples: The Story of the Fruit of Temptation, says research suggests apple trees originated in the area known now as Kazakhstan, probably around 6,500 B.C. In about 1630, apple seeds were brought onto American shores by the Pilgrims and, in the early 1800s, farmer John Chapman, better known as Johnny Appleseed, traveled throughout the Ohio Valley, planting thousands of apple trees along the way.

Today, due to cross-pollination from bees, wind and birds, there are more than 7,500 apple varieties, most of which are red, green or yellow, ranging in size from a cherry to a grapefruit. “Apples are constantly hybridizing,” says Browning. “If you were to try and plant an apple seed, it is so genetically complex, you have no idea what you’d get.”

Apples are fleshy fruits, covered by a thin skin that holds two-thirds of its antioxidant benefits. They are rich in fl avonoids, phytochemicals with antiviral, anti-inflammatory and antiallergenic properties, as well as free radical–fighting quercetin and pectin, a natural fiber that promotes skin tissue growth. Apples also contain vitamins C and D, betacarotene and skin-renewing malic and alpha hydroxy acids.

They have myriad medicinal benefi ts, used to relieve acid indigestion and as an antiseptic for wounds. Rotten or boiled apples were used to calm sore eyes and applied topically as a cure for rheumatism and warts. Apple pulp was used to treat irritated, rough skin, while apple water was ingested to treat fever.

The apple tree can live for 70 years and is a member of the rose family. “Apples are very resilient,” says Browning. “They’ve been around so long because they could keep all winter in a basement or even a cave.”