Korea Pavilion a Highlight at Cosmoprof

One of the novelties being presented in the tent was Acropass, billed to be an antiwrinkle “smart filler patch,” from South Korea’s Beauty & Academy. 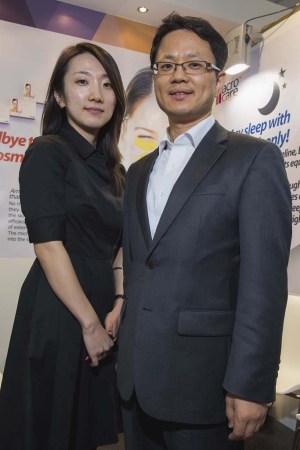 BOLOGNA, Italy — The Korea Pavilion was among the highlights of Cosmoprof’s most recent session, which ran from April 4 to 7 here.

One of the novelties being presented in the tent was Acropass, billed to be an antiwrinkle “smart filler patch,” from South Korea’s Beauty & Academy Co. Ltd.

The patch has biodegradable micro-needles, a new technology, explained So-Jung Kang, marketing manager for Raphas Co. Ltd., which manufactures the needles. Acropass’ microstructure technology works in part by stimulating skin’s immune system, which helps the synthesis of collagen for the health of skin.

Acropass is billed as being able to deliver hyaluronic acid filler and epidermal growth factor deep into the skin layer for plumping and moisturizing effects, as well as for promoting cell growth.

After about two hours in the skin, the biodegradable structures melt away. The small patches can be used anywhere to target wrinkles, said Kang.

Acropass was first marketed at the end of 2012 in Japan, then was sold in Korea starting in late 2013. It is currently retailed in aesthetic salons and clinics, priced at $90 to $100 for a box of four pairs of patches.

The product, according to Kang, can smooth and lessen wrinkles. She added the plan is for the filler patches to be used for medical uses in the future.

Beauty & Academy was present at the trade show with a mission of broadening its distributor reach, especially in Europe — as were most other South Korean companies there.

It was also true for Adwin, which was highlighting its facial masks, patches and tissues.

“We already have several partners in Europe, but not enough; we are trying to find partners here, especially for private label,” she said, adding that strict European import regulations cause a stumbling block in the process, however.

Adwin has attended Cosmoprof yearly for almost a decade. Often it signs on partners in countries such as the U.S. — where it works with retailers like Wal-Mart, Kmart and some dollar stores — the United Arab Emirates and Asia.

Fang added Cosmoprof is “a good chance to see our clients in one place.”

At the show, she was presenting, among other items, a new “CO2” mask, which targets skin irregularities, such as pigmentation.

Ami Cosmetics was at Cosmoprof for the first time to display its four midrange brands, including BRTC, CLIV, PureHeal’s and EssenHerb. Each has a different positioning, with BRTC in cosmeceuticals and CLIV in medicated products.

PureHeal’s and EssenHerb — whose formulas have nature-derived and plant-derived ingredients, respectively — were being spotlighted especially for Europe. There, Garam Lee, manager for the company’s overseas business division, hoped to surf the rising trend for natural beauty products.

“The reason why we came here was to find European buyers,” he said. “We have been specializing in the Asian market for seven years.”

He added Ami was looking for U.S. distributors, as well.

To help facilitate Ami’s push abroad, the company is in the process of getting FDA certification for its products in the U.S. Registration is also under way in China, where approximately 30 of the company’s items have already gotten the green light.