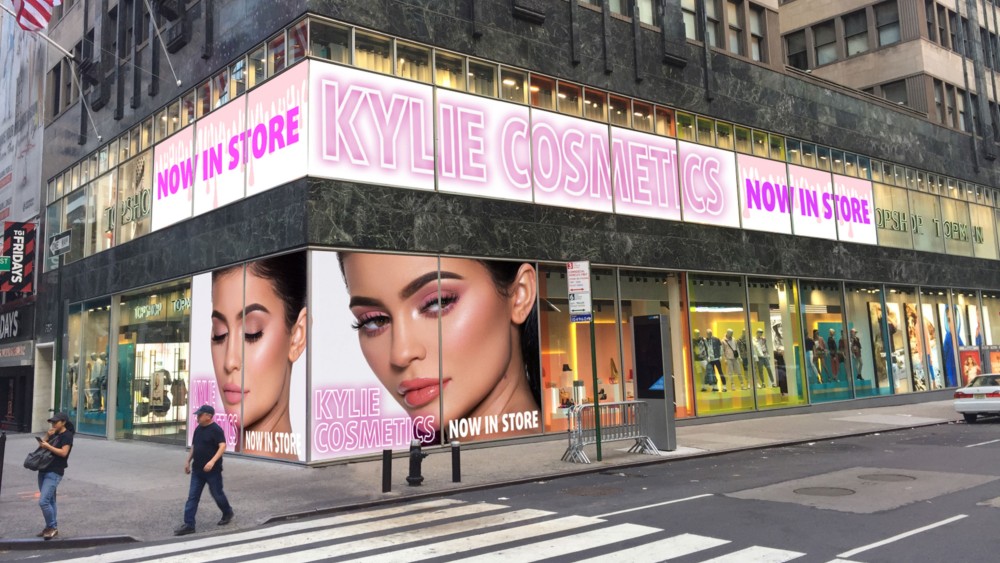 The youngest Kardashian-Jenner sibling is partnering with Topshop — which will be the first brick-and-mortar retailer to carry her Kylie Cosmetics range. Until now, the collection has been sold exclusively online. On Nov. 20, Jenner’s $420 million makeup brand will enter seven Topshop stores in top-performing markets in the U.S. via a five-week pop-up shop. Stores in Los Angeles, Atlanta, Houston, Las Vegas, Miami, Chicago and New York will sell Jenner’s signature liquid lipsticks, eyeshadow palettes, blushes and highlighters (“Kylighters”).

“My brand is all about empowering young women, and giving them confidence through makeup, and I feel that Topshop shares that same mission,” said Jenner, adding that she’s a longtime fan of the retailer. “My own pop-up shops have been so successful and I can’t wait to bring the Kylie Cosmetics Pop-up experience to more of my fans across the country.”

The 20-year-old mogul has also created exclusive Topshop merchandise. The retailer is the first and only place consumers can buy eight shades of lipstick, which are sold in two palettes containing four lipsticks each.

The catch: The Kylie Cosmetics collection will only be available in these select Topshop doors, with no corresponding online presence at topshop.com.

The absence of topshop.com from selling the range appears to be a deliberate move on Jenner’s part to ensure that all e-commerce sales continue to take place on her own kyliecosmetics.com site. The strategy enables Jenner to maintain the majority of her sales through her own site while gaining more experience in brick-and-mortar retail.

She’s already dipped her toes into off-line sales with two shorter-term Kylie Cosmetics pop-up shops operated by the brand bowing in L.A. in December and in New York in February. But the Topshop partnership does something different: It opens up a tactile shopping experience in four major U.S. cities for consumers who likely did not have access to the L.A. and New York shops. And there is clearly a demand from consumers to touch and try the products in person, as evidenced by the 5,000 people who showed up to the opening of the inaugural pop-up at the Westfield Toping mall in December.

For Topshop, which introduced beauty in 2010, aligning with Jenner gives the retailer an edge product-wise that will hopefully get younger customers off their phones and into its stores — the only place they can buy Kylie Cosmetics outside of her web site.

“The whole team, everybody, loves what she’s doing. We think it’s very, very, very much our customer and we thought we’d give it a shot. Nothing’s ever been done with anybody else so we wanted to give it a go. We like to do what nobody else does. We like to be first,” said Topshop owner Sir Philip Green during an interview in London Thursday, adding that the retailer is planning a “proper pop-up with all her visuals — not just a few things on the shelves.”

He sees the Kylie deal as the latest in a string of projects with strong women such as Beyoncé and Kate Moss, both of whom did exclusive collections for the retailer.

He maintained the relationship with Kylie Jenner and her family goes back a long way. “Her sisters are customers of ours, they shop with us,” said Green, noting that this eventually led to a dialogue with Jenner about doing a solo project together.

Green said it’s “actually been fun dealing with [Kylie and her team] and actually it’s been very easy. It hasn’t been stressful. Kylie has been great. We had a call to go through stuff with her, and we sent her the shop front and how the shop visuals are going to look and she said: ‘This is one of the first times I don’t want to change anything.’”

While it’s the first time that Kylie Cosmetics is teaming with a retailer on a brick-and-mortar project, it isn’t the first time the Jenners have partnered with Topshop. Last month, Kendall and Kylie Jenner began selling lingerie and swimwear at Topshop and on the retailer’s web site under the Kendall + Kylie brand name.

But the move to open up Kylie Cosmetics’ distribution with Topshop still appears to be a departure from the, until now, direct-to-consumer model of selling that’s propelled the brand into an empire worth hundreds of millions of dollars, with sales projections of $386 million for the year.

Venturing into physical retail was always part of the plan, Jenner said in an interview this summer, where she said her brand’s digital flagship will remain the primary sales channel. She specified, however, that if and when she opened stores, they would be owned and operated by Kylie Cosmetics – similar to the Warby Parker or Bonobos model established at the dawn of the direct-to-consumer boom. Jenner said that next on the brick-and-mortar front would be additional pop-ups in top markets for her brand, such as Chicago and Houston. She made no mention of going the wholesale route.

The implications of selecting Topshop as a retail partner are, however, significant for the brand’s future growth. It could be a signal that Kylie Cosmetics is readying its Lipkits for overseas expansion, with Topshop a low-risk way to test non-U.S. markets in-store. Entering new regions is costly, as well as complicated from a logistical standpoint, and smaller-scale partnerships with an organization of Topshop’s size could be appealing for two reasons: the retailer is headquartered outside the U.S. and has strong footprints in Europe and Asia. Testing the waters in these markets before investing in full-scale global expansion could be invaluable to Jenner. A spokeswoman for Jenner said there are no specific plans to roll out the pop-up concept with Topshop globally at this time.

Kylie Cosmetics’ entree into a third-party retailer comes on the heels of another direct-to-consumer beauty brand making a play in the physical world. ColourPop made headlines when it was revealed that the once e-commerce-only cosmetics line would enter 50 Sephora doors across the U.S. and Canada last week with a slew of exclusive products — the brand’s first retail presence since its inception in 2014. Interestingly, ColourPop’s parent company is Oxnard, Calif.-based Seed Beauty, which is also the manufacturer of Kylie Cosmetics (although it does not have equity in Jenner’s company).

For More From WWD on Kylie, see: