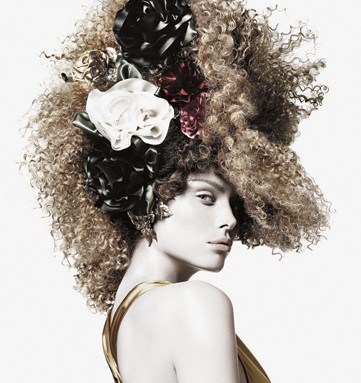 The invention of a synthetic hair dye more than 100 years ago gave life to the beauty company now known as L’Oréal. The firm’s professional division, which today is home to thousands of color and hair care formulas, carries this birth legacy with the deepest sense of pride.

“We were born with hairdressing. The products that were created in 1907 were carried around in a suitcase for stylists. This is a distribution channel and a category to which we are extremely committed historically and emotionally. It is in our DNA,” says Nicolas Hieronimus, president of L’Oréal’s global professional division, which generates more than $3 billion in sales annually.

L’Oréal’s professional division has come a long way since 1909, when the firm was registered as the Société Française de Teintures Inoffensives pour Cheveux (Safe Hair Dye Company of France) by its founder, French chemist Eugène Schueller. And it has weathered many a storm, including fierce competition from archrival Procter & Gamble Co.

All of which has made the division that much stronger, especially now, as it combats the economic storm, one in which the overall salon market in 2008 grew just 0.3 percent.

For the firm’s first quarter, sales fell 3.2 percent to $787.3 million, which showed that consumers are still stretching out their visits to salons. For the full-year 2008, L’Oréal’s global professional division grew by 1.3 percent, to $3.35 billion, outperforming the market and yielding a 27.4 percent share of the market, making it the industry’s leader. Cracks began to show in the last quarter of 2008 when, like most businesses, L’Oréal saw a slowdown, mainly in developing countries.

Still, L’Oréal’s strong brand portfolio helped pull it through the year and the first quarter, with Matrix, the most price point–friendly brand in the stable, growing in Western Europe; PureOlogy, which L’Oréal purchased in 2007, making its global debut throughout this year, and Kérastase maintaining innovation in the salon industry with a hair-slimming technology found in Oléo-Relax Slim, its newest line.

This year, L’Oréal is focusing on several opportunities, with one of the main goals being salon conversion — convincing salons to use one of its numerous brands. During the past four months, the division has converted more than 5,000 salons in Western Europe.

“This is important because if like-for-like sales per salon are down, we can compensate through conversion,” says Hieronimus. “But, more importantly, our presence in the market will be much broader. Out of the 2.5 million salons that exist today, about 500,000 of them use one of L’Oréal’s brands.”

The U.S. salon market, which is estimated to generate about $60 billion annually (including spa services at salons), according to Diagonal Reports, is an industry that is perhaps the most likely to be susceptible to an economic downturn. As it stands, most salon chains are reporting that consumer traffic is down.

Belgium-born An Verhulst, who is settling into her new position as president of L’Oréal USA’s Professional Products Division, is optimistic that the estimated $1 billion division she has been tapped to oversee can rebound from the harsh blow dealt by the economy. PPD, roughly three times the size as its largest competitor, P&G’s professional division — which includes the Wella, Clairol and Sebastian brands — experienced a fourth quarter that was above the market, while division sales for the entire year were “a little better” than the performance of the overall market. The market was down for both the fourth quarter and year.

Salon product manufacturers overall saw a 5.2 percent dip of their estimated sell-in throughout North America. But a bright spot in 2008, explains Verhulst, were color sales. This year though, color isn’t “faring as well.”

“Now it’s a little different. [Last year] it was retail especially that was hit and color was still going strong. Now, [color] continues going down for the fi rst quarter. Retail products has been very badly hit and still is.”

“Services are not down that much, so we don’t really see a swap out or a trend of consumers going for hair color in the drugstore,” Verhulst says. “I think that is really related to L’Oréal spending 10 years in professionalizing the profession. We ask our colorists to do at least two colors on a client, or even three colors, to make sure that when she gets home she sees the difference the professional touch makes. It makes her different from her colleague and it makes it a bit harder to copy at home.”

PPD, which accounts for about 30 to 35 percent of L’Oréal global salon sales, was prepared for the downtown, Verhulst says, knowing as far back as 15 months ago the economic tide was about to turn.

“We are a big company and we prepare ourselves. And we know also that, very often in economic difficulties, salons are one of the first businesses to be hit because it is not really a necessity for the household to go to the hairdresser. That is quite obvious. But we are also really confident that we will be the first to come out when the tide turns. So everybody thinks the second half of the year will be different.”

To get PPD there, Verhulst, who has been in the U.S. since January and most recently served as general manager of the Professional Products Division in Brazil, says her first order of business for North America is to help L’Oréal’s various salon brands seduce clients back into the salon and, once they’re there, have stylists sell them products.

“The rate of retail is going down and the visits are being stretched, so we have to make sure that our stylists, who are the best advocates for our products, don’t stop talking about our products,” Verhulst says. “Now, they are so happy that the consumer finally got into their chair they feel they don’t want to load her up. But I always say to my teams, ‘When I go to a restaurant, the waiter still asks if I want dessert.’ Stylists need to say, ‘Finally! My consumer is back and I need to make sure I seduce her when she is at point of sale.’”

Technological breakthroughs, safer products, quicker products and developing innovative services out of popular products also will build the business, she says, with the biggest opportunity in hair color.

Verhulst hinted at “a few exciting technological breakthroughs that are a little bit confi dential…but we are working on something quite amazing in the hair color business.”

One can only guess at what the breakthrough may be, but with P&G taking the lead in the at-home quick-color business with Nice ’n Easy Perfect 10, one that L’Oréal shot back at with Excellence-to-Go, a salon quick-color formula can’t be too far behind.

Acquisitions are still being considered, says Verhulst, who explained that, despite the economy — and PPD’s two-year buying spree that brought it a handful of key distributors and $200 million hair care brand PureOlogy — L’Oréal remains “an aggressive, strategic firm” that would not put a buy on hold. The fi rm’s distributor acquisitions “are helping create more proximity to the salons” they service and control their route to market. Now grouped under the SalonCentric division, led by Paul Sharnsky, the distributors also give them better leverage between their distributor sales consultants and their store business. “It also helps combat diversion,” she says.

Slashing diversion has for the past two years been one of PPD’s biggest projects. Last year, says Verhulst, the division cut off about 2,500 salons that were found to be selling products out the back door.

“L’Oréal gives a salon several chances to change their behavior, such as selling product out of their back door to unauthorized dealers and distributors, but if we see the diversion continues, we end the relationship. [Last year] these cuts represented more than $25 million. That was a big hit for us. But that’s OK.”

She says that, for the first quarter, PPD will be down 27 percent in diversion. Working against diversion will continue online, via a blog that was started by Verhulst’s predecessor, David Craggs. Verhulst expects PPD veterans Sharnsky and Pat Parenty, brand president of the Professional Products Division of L’Oréal USA, to take over the blog.

And several of PPD’s key brands look to keep the division buoyant for the rest of the year. Take, for example, Kérastase, a brand that across the world has become the reference in hair care, even more so in the U.S. with its tight distribution and luxury positioning. In 2008, it proved to have the legs to withstand a financial crisis by generating an estimated $150 million in sales, up 8.9 percent over the prior year.

“It is the brand that never deceives,” says Verhulst, who explained that in 1999, when Kérastase launched to the U.S., it created elite status by only being available in a very few, carefully selected salons in the country. “It brought a new level of sophistication in client services. The brand established the benchmark in salon treatment services and retail. As I see it now, in the U.S., it is a ‘love’ brand. And, even when there is an economic downturn and the temptation of down-trading is obvious, we see consumers do what we all do: They try something else, but in the end they come back.”

Worldwide, Kérastase is sold in 1 percent of salons, and in the U.S. it is available at about 1,050 salons. This year, Kérastase plans to maintain its luxury image while expanding selective distribution, staying under 1 percent of the top salons in the U.S.

Then there’s Redken, L’Oréal’s fashion-forward brand, which again plans to be front and center during fashion week for the spring 2010 collections. And Matrix, the firm’s largest brand and also its most accessible in terms of price point, will be highlighting its value proposition and is also a focus this year, Verhulst says. L’Oréal Professionnel, which, like L’Oréal, is celebrating its 100th anniversary this year, is launching LP Homme, a hair care and styling line for men, and Homme Cover 5, a 5-minute service that will color gray.

Even in an economic downturn, Verhulst concludes, the consumer will come back,
and when she does, she will simply call it her moment of pampering, luxury and indulgence.