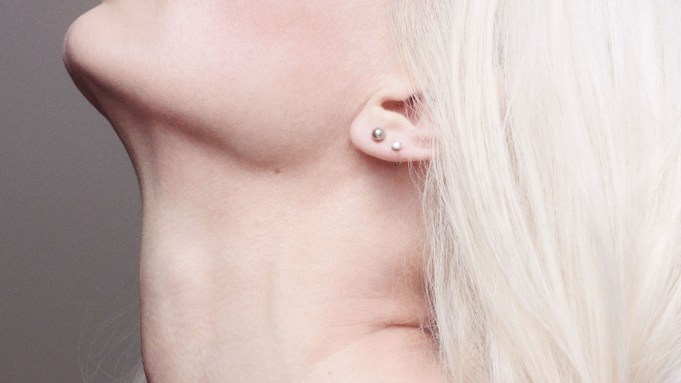 Marc Jacobs has named a new foundation after the “Shameless” tattoo emblazoned on his chest (above his left nipple, nonetheless).

It may sound crazy at first, but when the designer explained — “It’s only an aspiration but for me, it’s about showing your true colors, it’s being who you are, unapologetic and proud,” Jacobs told WWD — Shameless seems like an appropriate choice for Marc Jacobs Beauty’s third foundation launch, a 29-shade range that hits retailers on Feb 9. (The brand’s first light coverage Genius Gel formula is in the process of being phased out, and Shameless will take its place as Re(marc)able Full Coverage Foundation’s more buildable counterpart.)

“One of the most important characteristics, in terms of a contemporary, youthful look, is not that heavy sort of makeup, but something that’s fresh and breathes and allows radiance and the texture of the skin to come through. I want women and men to feel so good about their skin that they shamelessly show it off — in person, online, wherever one wishes,” Jacobs continued, noting that online reviews prompted the need for a medium coverage foundation — and one that “looks like skin.”

Tara Loftis, senior director of global brand marketing for Marc Jacobs Beauty, called the rollout the most significant for the five-year-old brand to date, from an innovation, volume and marketing perspective. Shameless took over two years to develop, and Loftis is confident that a combination of SPF 25 (via a first-to-market encapsulated SPF technology that provides “flashback free” finish) and skin-care ingredients differentiate the product from the competition, the majority of which still don’t contain any sun protection. She added that snow mushroom, or “nature’s dupe for Hyaluronic acid,” and hydrating Blue Daisy extract are two key ingredients designed to give wearers skin-care benefits. Shameless retails for $46.

Loftis declined to give sales projections but an industry source estimated the foundation should do $30 million in retail sales in its first year. Currently foundation makes up 10 percent of the brand’s retail sales, which are said to be on track to reach $200 million this year. With the addition of Shameless, Loftis said the goal is for the foundation category to drive 25 percent of Marc Jacobs Beauty’s business, which means that foundation could soon comprise over $50 million of overall sales. The current collection includes 32 products and 200 stockkeeping units, and has distribution at Sephora, Bergdorf Goodman, Neiman Marcus and Net-a-porter.

Inclusivity and a wide assortment of shades were key for the brand when introducing a new complexion product. Shameless contains 50 percent more shades than the Genius Gel it’s replacing, which initially launched with 16 shades. Re(marc)able Full Coverage Foundation has 22 shade options.

“It wasn’t a strategic decision to up the shades as much as it was a commitment to every woman being a customer of our brand and [knowing] every woman that can possibly be cast in a show could be perfectly matched. We tested so many different formulas and we actually started with 42 shades,” Loftis said. “We found that 29 shades was the right number, actually. That said, because it’s not super full coverage the shades do flex up and down slightly — and that’s one of the best details of feedback that we’ve received from makeup artists.”

Lofts said a “robust” marketing strategy will support Shameless’ rollout, where 50 percent of spend was dedicated to digital investments and the rest on creative content, print and out of home advertising, in-store activations, sampling and experiential marketing. Regarding the latter, a two-day influencer activation will take place during New York Fashion Week where nine influencers will be introduced to the product via Jacobs’ runway show, a dinner and styling appointments at the brand’s SoHo store. Teni Panosian, Marianna Hewitt, Nikkie Tutorials’ Nikkie de Jager and MakeupShayla’s Shayla Mitchell will be among them.

Additionally, a digital campaign featuring traditional models is central to ushering in the new foundation. To showcase Shameless’ breadth of selection, Jacobs tapped 29 models — one for each shade — to feature in a campaign that the brand begun to tease on social media Tuesday. From Lily Nova (Shade Y110) and Teddy Quinlivan (Shade Y130) to Riley Montana (Shade Y570) and Alek Wek (Shade R590) and everyone in between — Sohyun Jung, Missy Rayder, Rose Daniels, Tess McMillan, Ke’Andra Samone, Dipti Sharma, Kesewa Aboah, Aube Jolicoeur and Amelia Rami, to name a few — the purpose of the campaign is to let consumers know there is a “perfect match for all women” within the range.