The collection will feature three products and five scents, which allude to New York City life. 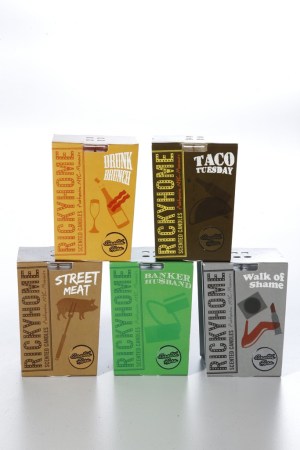 Following up on the introduction of a New York City-inspired nail line called RickyColor this summer, Ricky’s NYC is branching into body care and home products with RickyHome, launching today in Ricky’s stores and online.

“It’s playing with bath and body in a way that it’s with a wink,” said Lorne Lucree, director of product development. “It’s all about insider New York moments in a humorous, fun, Ricky’s way.”

Lucree, who was brought on to the company eight months ago with the task of launching the range, said the retailer’s in-house beauty lineup has the potential for expansion beyond the chain’s 29 stores and more beauty offerings.

“This is a category we are looking to grow,” said Lucree, adding that the nail polishes have been selling well since their launch, leading the retailer to explore the beauty world. “We still have to figure out where we can play.”

Lucree said among the top-selling beauty brands the retailer distributes are affordable cosmetics brands like NYX, as well as Smashbox and Stila.

Prices for RickyHome range from $10 for a soap-on-a-rope to $24 for a candle. While the brand would not talk numbers, industry sources believe it could generate $1 million in its first year at retail.

“Candles is a big business for us,” said Lucree. “It’s one of the lead options for what people come to us for.”

To connect to the daily life of a New Yorker, Lucree said each scent uses specific fragrance notes to conjure memories. Drunk Brunch is meant to evoke the scent of bottomless mimosas and hazy recollections of evening happenings with a fruity base and undertones of sandalwood, sweet violet and white musk.

Meanwhile, Walk of Shame, according to Lucree, recalls an early escape home after a shameless night of fun. Notes of sparkling lemon, watery jasmine, sheer musk and lily of the valley are meant to be indicative of a crisp Manhattan morning. “It’s the silver lining of a walk of shame — when are you ever awake before 10 a.m. on a Saturday morning?” said Lucree. “It’s the fresh morning air and a hint of tobacco from the night before.”

For its part, Banker Husband is meant to capture the scent of the perfect, and affluent, New York City gentleman just out of the shower. Notes, which are meant to be “masculine,” include cardamom, lemon drop, fir needle, rosewood and oakmoss.

To capture another city tradition, Taco Tuesday is a “little nod to Mexico,” said Lucree.  Notes of coconut, tangerine, cumin and red pepper are meant to celebrate the midweek beer and taco deal. “It’s more on the sweeter end than spicy,” he added.

Perhaps the collection’s cheekiest scent profile is Street Meat, designed to recall the smoky fumes that no New York City-bound pedestrian can escape. Whether its grilled meat or vegetables, the scents of whiskey, charcoal, outdoor leather and cedarwood blend to create an aroma meant to be instantly recognizable. “There’s a little scent of halal spices,” said Lucree. “To me it smells a little like smoke and food flavor fire in a country house.”

Looking to holiday, Ricky’s NYC will continue to expand its beauty initiatives with items like a limited-edition makeup palette named Ricky Loves NY. The $20 palette features a new crimson rouge called RickyRed, which features a bold blue center to make the hue pop.

The kit will be available in two color schemes, First Central Park Stroll and First 4AM Taxi Ride Home. Ricky’s second holiday launch will expand on the RickyColor nail polish line. The brand will be introducing five  shades that correspond in color and in name to the RickyHome collection. Each polish will retail at $6.50.

Two additional holiday launches include Disco Sticks, a $20 set of five tinted lip pencils and the Cover/Coat/Kiss Coordinating Kit, $20, which is a gift set containing a color matching iPhone case, RickyColor Polish and topcoat and a Disco Stick. The kit will be available in four shades. All holiday items are rolling out now.