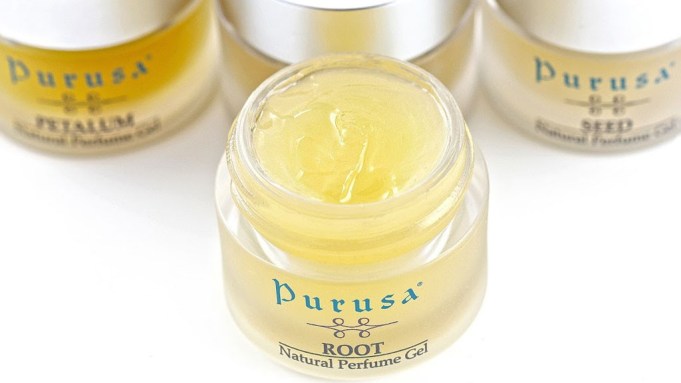 Consumers are interested in natural perfumes but are often disappointed in their results.

Sebastian Signs is attempting to address the problems of natural fragrances — they can be short-lived and simple — with a new collection of four fragrances in the Los Angeles niche fragrance house’s Purusa line of botanically based products. The fragrances are the first to use a new gel technology, made from argan oil by green supplier JKH Ingredients, that was designed to be a natural alternative to petroleum jelly.

“For years, working in the industry, it was challenging making natural fragrances because they don’t last long on the skin. I was always reluctant to make a natural fragrance for myself for that reason,” said Sherri Sebastian, perfumer and owner of Sebastian Signs. Natural carrier oils such as almond or jojoba were the problem, she continued. “When you put them on your skin, they absorb into your skin. So, the fragrance isn’t staying on your skin long,” Sebastian explained, adding, “The gel lasts longer on your skin. It will last for a few hours.”

Priced from $115 to $125 for a 0.5-oz. jar, the four unisex gel fragrances in the Purusa line are Leaf, Root, Seed and Petalum. The scent of each fragrance has ingredients from the part of the plant it is named after. For example, Seed has seed-derived ingredients coriander, cardamom and cumin; Leaf has leaf-derived ingredients petitgrain, violet and buchu. “I wanted something classic with a different twist. I wanted something with appeal — but also not super common,” said Sebastian, speaking about creating the fragrances. “The scents themselves are complex for all-natural blends.”

Because they are in gel form, applying the fragrances isn’t typical. Sebastian instructed that people should dip their fingers lightly into the gel to scoop out a half-pea-size helping of it. She then recommended gliding that amount over forearms rather than putting it on pulse points. “It is to keep the character of the fragrance intact,” she said. In addition to their smell, the gel fragrances have skin-care benefits. They can enhance skin elasticity and smoothness, and boost moisture.

Sebastian believes the gel fragrances will attract two groups of consumers: perfume enthusiasts excited to try a different fragrance concept, and consumers who are cautious about what ingredients they slather on their skin and are looking for natural fragrance options. The Purusa gel fragrances have already launched at MiN New York, Ver Unica in San Francisco and Myrtle in Los Angeles, and Sebastian said her goal is for them to be carried at 50 stores by the end of the year. Industry sources estimate they could generate $300,000 in sales during their first year on the market.

“Most indie fragrance brands focus on scents. A lot of them are doing their own distillations. I don’t see a lot of them focusing on different forms,” said Sebastian. “I have seen the solids and I have seen the sprays, but I haven’t seen them use the gels, so I’m a standout in that respect.”