Who's buying what— and why. 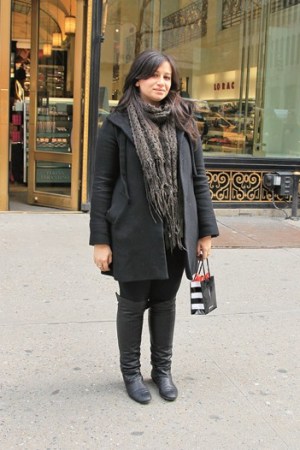 Shopper: Victoria Zakhary, 25
Date/Time: 1/11/2011, 12:28 p.m.
Store: Sephora
Location: Fifth Avenue, between 48th and 49th Streets
City: New York
What’s in Victoria’s Bag: Despite the frigid temperatures and impending snowstorm, Victoria Zakhary, a financial services representative, trekked to Sephora in search of a new bronzer. “I had been using one from Benefi t but found it was too cakey for me and I wanted something with more of a natural finish,” she says. Zakhary, a self-proclaimed product junkie who lives in downtown Manhattan, names Bloomingdale’s, Saks and Macy’s as her favorite beauty haunts, and Nars, Lancôme and Bobbi Brown as her go-to brands. On this day, her Sephora purchases included Nars Bronzing Powder in Casino, a shimmering tan shade; Pacifica Indian Coconut Nectar Perfume Roll-On, and Dior DiorShow Iconic Mascara, bringing her total spend to about $77. Zakhary’s Sephora surprise? A free sample of Fresh Citron de Vigne fragrance, gifted thanks to an accumulation of her Sephora Points

Shopper: Amy Haycock, 20
Date/Time: 1/11/2011, 1:45 p.m.
Store: Sephora
Location: Madison Avenue and 42nd Street
City: New York
What’s in Amy’s Bag:Amy Haycock, a full-time student in the U.K., celebrated her first visit to New York and her upcoming 21st birthday with a trip to Sephora. “There are no shops like this back home,” says Haycock, who bought Lancôme Hypnôse Drama Mascara; Urban Decay 24/7 Glide-On Lip Pencil in Naked; Kat Von D Tattoo Chronicles Palette, Volume 1, and a Sephora Collection Buildable Cover Complexion Kit in Light. Describing herself as a “makeup collector,” Haycock’s favorite brands are Soap & Glory, Simple, Lancôme, Maybelline and Borghese. At Sephora, the colorful Benefit display caught her eye, as did the shelves showcasing the store’s most recommended items. “In the U.K., most products are behind counters and you can’t really see them or touch them,” she says. “Here, you can be much more hands-on.” After spending an hour shopping and about $120, Haycock described her experience as “very, very fun.”