Two women share what beauty products they're investing in. 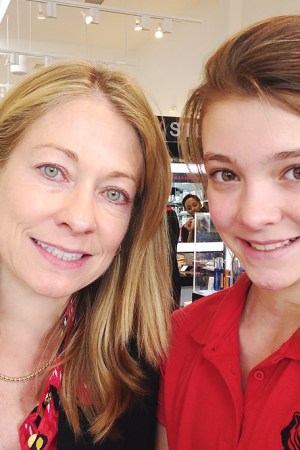 School let out early on Friday, so Meghan Harris seized the opportunity to take her teenage daughter Lili to Sephora to introduce her to makeup and skin care. “She just turned 13, and I’m feeling that she is welcome to experiment. Lili is starting to get some breakouts, so we also wanted help finding out what to use on her sensitive skin,” says Harris. A sales associate guided the duo to First Aid Beauty, a brand Lili wasn’t familiar with, but was encouraged to try for her acne. Makeup was next; Lili scored concealer and a multiuse palette from Urban Decay and Sephora’s house label, respectively. Lili thinks a small handful of cosmetics will be sufficient for her needs. “I just want to wear some for special occasions and parties and, when your friends come over, it’s fun to do each others’ makeup,” she says. While at Sephora, Harris, who spends about $300 annually on beauty, snagged some items for herself, too. “I’m really boring with makeup,” she says. “I am trying some new stuff, though, but it is all from Nars.”

Kate Winslet is Kristen Ostro’s skin-care icon. “She is aging gracefully, and she looks gorgeous. I want to accept the lines when they come, but keep my skin looking as nice as it can,” says the 34-year-old who works at a venture capital firm.

“My goal is to be proactive in my skin care. If I start taking care of my skin now, then I’m hoping I won’t need a huge face-lift or aggressive Botox.” Ostro’s quest led her to the Clarins counter at Nordstrom in January, when she picked up two products she ended up adoring. “I was super excited and wanted to try other things they had,” she says. Prompted by a facial offered free with a purchase, Ostro returned to the store today to redeem the service, a prelude to additional purchases. Between items pre-sold to her and her in-store buy, she exceeded the $500 to $600 she says she typically spends annually on skin care.