StriVectin, which plays a double role as a stretch mark remedy and a wrinkle fighter, is now in the midst of a reinvention. 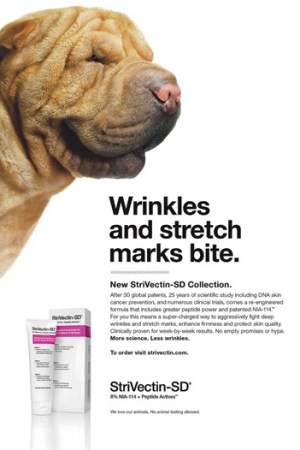 No. 21 to Debut Beauty Line by Celebrity Makeup Artist Ayako

Eye Candy: Women of Worth

Despite its initial success as an indie sensation, seven-year-old StriVectin is now in the midst of a reinvention.

Shortly after its launch in December 2002, StriVectin shot to the top of department store rankings as a single-item skin care product. But its new owner, Catterton Partners, has decided it’s time to retool.

StriVectin is now a problem-solving facial skin care line, powered by a completely new technology — a proprietary NIA-114 molecule, or niacin from nicotinic acid, that is used to stimulate DNA repair, generate energy and strengthen the skin barrier, according to Chrysallis, the management arm of Catterton, which specializes in beauty companies.

The original peptides were updated and quadrupled to spur collagen creation. A new marketing campaign was put in place, centered on a strong battery of claims backed up by the results of clinical trials with 143 subjects, including biopsies.

The packaging was redesigned to boldly declare on the outer cartons and the bottles what the consumer could expect to see after two weeks of use, then four weeks and finally eight weeks. To give the advertising a modern bite, the original “Better Than Botox” blockbuster slogan was replaced with a more tongue-in-cheek approach. One ad, featuring a lizard, bears the headline, “Shed wrinkles and sun damage.” Another shows the folded-over face of a shar-pei with the slogan, “Wrinkles and stretch marks bite.” A third ad has the gnarled feet of a bird with the call to action, “Kill crow’s feet.”

The brand, which was launched by Basic Research, was initially aimed at men who lifted weights and sold in GNC stores. “It was designed for muscle heads,” observed Melisse Shaban, chief executive officer of Chrysallis, which is remolding StriVectin. “It became a cult; it got a little bit of viral recognition. The consumer made the connection between the stretch mark and the wrinkles. Basic Research got wind of this happening and then went after the business more directly.”

Shaban called the marketing effort “brilliant” with its “Better Than Botox” message. StriVectin “hit on a chord of hope. It grabbed a place that didn’t exist in our industry, which was right before you made the leap to an injectable,” she said, referring to the brand’s positioning as an alternative to medical procedures.

Jill Scalamandre, chief marketing officer of Chrysallis, praised StriVectin as “the first to really, truly pioneer the use of peptides. The problem was that it was not exclusive technology, so within 24 hours you had 30 other brands using peptides.”

Karen Grant, vice president and global beauty industry analyst at The NPD Group, said StriVectin was the first single item to outsell on a dollar basis the department store queen, Clinique’s Dramatically Different Moisturizer. “Nothing had ever done anything like that before,” she said, noting that the product was clearly “a cult, niche revolution,” because only 5 percent of women knew about it when surveyed. She credited StriVectin with not just “helping ignite the category” but opening the door for others to rush in and giving a voice to other upstart brands.

Chrysallis has now redeveloped StriVectin into a line of 10 stockkeeping units, led by a power trio of new products containing the niacin molecule.

To make the hefty price points more livable, StriVectin is offering a $99 kit featuring smaller sizes of the three products. “So you have smaller sizes in kits to help access and trial,” Scalamandre said.

Set for a debut on QVC on August 14 and a full department store relaunch at Macy’s, Bloomingdale’s, Lord & Taylor, Dillard’s, Sephora and Ulta in September, the line, which is available at the newly relaunched strivectin.com, is being positioned as the age solver. “We’re the clinical antiaging skin care brand that solves aging concerns: problem-solution,” said Scalamandre. “It’s very focused, it’s very simplistic, but it’s a mission.”

Industry sources estimate that the brand is doing $130 million a year in retail sales on a global basis, with total distribution of department and specialty store chains stretching from Mexico to Asia. Two of the brand’s top accounts are Macy’s in the U.S. and Sephora in Europe. Although executives declined to discuss numbers, knowledgeable sources estimate that the brand could conceivably grow into a couple hundred million dollars in size within three to five years. To achieve this level, Chrysallis is expected to invest more than $20 million in advertising and promotion.

Scalamandre noted that StriVectin is in the authority-building phase. “What we’re doing now is credentializing the brand,” she said.

Because of the unusual nature of the product, StriVectin plays a double role as a stretch mark remedy and an antiaging wrinkle fighter. It also has a two-footed consumer base. Scalamandre estimated that one group consists of women ages 25 to 35 who have had babies. “You’ve got 30 percent who are using it for stretch marks, you’ve got 30 percent only for face and that other 30 percent is using it for both,” she said.

“It was born a stretch mark cream and became a phenomenal antiwrinkle cream, [so] you’ve got an interesting consumer base.” Shaban added, “The user who we really covet is the antiaging customer, and she’s from 40 to 60.”

Scalamandre interjected, “Our average is 44.”

She described the typical customer as “not the traditional beauty user; this is a woman who looks for that pharmalike, effective, almost that medicinal healthy skin.”

Shaban observed, “What we have to do is continue to build a relevant and important relationship with this consumer. We give her five ounces of product, everybody else gives her 1.7 ounces of antiaging. We tell her to use this on multiple parts of her body, because we know enough about a wrinkle and a stretch mark to understand the properties of how to diminish those things, and they’re the same. We have scientists who are world-renowned researchers in the field of skin cancer at the University of Arizona who are our partners. They’ve been working on the nicotinic acid for 30 years.”

One group that the Chrysallis team is focused on is the 40 percent of users who left the brand, either because the product didn’t perform to expectations or the medicinal masking scent was a turnoff, according to Scalamandre, who said she is determined to reduce the 40 percent to 20 percent.

One of the key elements in the reinvigoration of StriVectin was the purchase of the rights to the nicotinic acid molecule, a form of vitamin B3.

Turning to future applications, Shaban said, “There are three or four platforms that we can address with the nicotinic acid molecule.” She then mentioned the possibility of launching a whitening product. “There have been very early signs that this is going to perform quite well.” She also talked about adult acne as another opportunity. “We’re very focused on acne — but from an antiaging perspective,” Shaban continued. “We don’t expect to compete with Neutrogena and Clearasil, but we think there’s a pretty good-size antiaging acne market out there.”

Sampling figures prominently in the promotional campaign, and a vigorous advertising program has been put together. It includes not only customary print ads and outdoor displays, but social media. StriVectin has arranged to have 10 video bloggers track their experiences with the product. Also, the company will participate in three segments of Better TV.

Shaban in particular is keen on putting the product in the hands users who can be influential advocates.

The StriVectin crew has set up the StriVectin Foundation to service and support women who “live to give” by the career fields they’ve chosen, such as teaching and nursing. Similarly, the company is sponsoring Teachers Count. Shaban explained, “We want to give them good buying power, good purchasing power. We want to reward people who choose not a narcissistic line of work that benefits themselves, but people who we depend on in life. They should have the right to have access at a different level.”