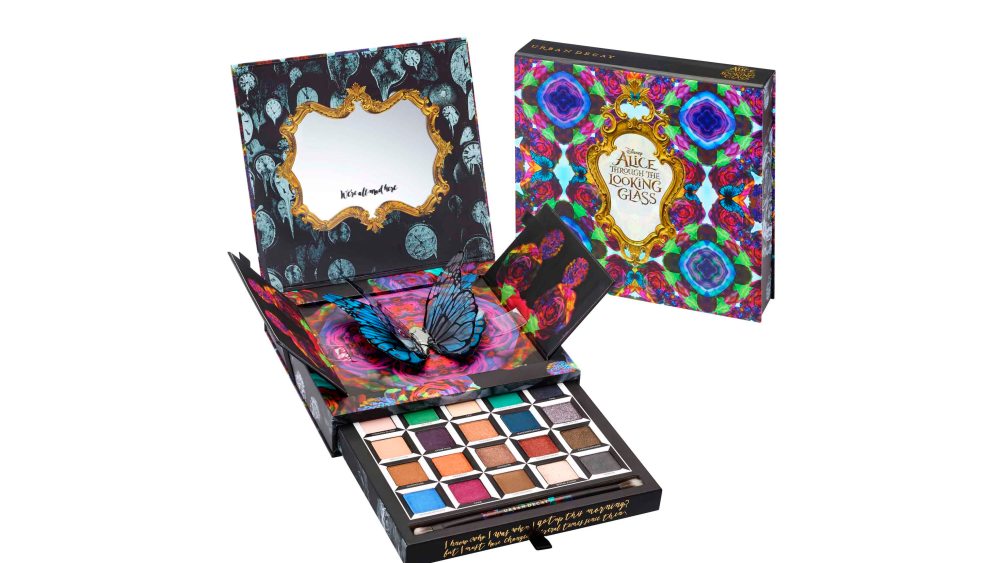 Cosmetics collectors get your clicking fingers ready. On May 1, Urban Decay is releasing its “Alice Through the Looking Glass” palette and lipsticks, sequels to the L’Oréal-owned beauty brand’s wildly successful “Alice in Wonderland” palette that instantly sold out six years ago.

Timed to hit the market before the movie produced by Tim Burton starring Johnny Depp, Mia Wasikowska and Helena Bonham Carter premieres on May 27, the lipsticks and palette, which already ended up on eBay for quadruple its $60 retail price, are expected to be snapped up quickly. “I hope it sells out,” said Urban Decay cofounder and chief creative officer Wende Zomnir modestly. “It’s collectible; it’s Disney, and it’s great makeup. I think it has a lot going for it.”

She noted the challenge in developing the “Alice Through the Looking Glass” products was distinguishing them from the previous collaboration, while retaining commonalities. Palettes tied to both movies are in a pop-up format and contain an array of vibrant shades. The latest palette has 20 shades, four more than the earlier one.

“We loved the original construction and keeping it in the same vein, but we wanted to tell a different story with the shades and really bring a focus to the shades,” explained Zomnir. The drawer that houses the shades is designed to propel the palette’s owner into a wonderland of color where five characters from the movie — Alice, Time, Mad Hatter, Red Queen and White Queen — each have four shades dedicated to them.

Alice’s shades, including a peach, pink, brown and periwinkle blue to match her trademark blue dress, are the softest, while the Mad Hatter’s shades such as a sparkly green, pink-speckled purple and gold-infused orange, are the boldest. Zomnir called Alice’s shadows “great foundational” shades, pointed out the Mad Hatter’s shades create a vivid Technicolor eye, and suggested Time’s shades — a gray taupe, black navy, silvery purple and deep bronze — are ideal for a deep smoky eye.

“My customer is a very independent thinker. She’s really into self-expression. She loves makeup. While Alice is a very plan character, she’s associated with the blue dress — in this case, it’s a coat — and we were able to pull in that interesting blue with her, and the makeup is rad for all the other characters,” Zomnir said. “Six years ago, Anne Hathaway’s White Queen makeup was a little extreme, but now you see it on the street.”

The outside of the prior palette was kept rather simple and dark, a contrast to the follow-up palette covered in dazzling colors. “This was made to look like an acid trip. We took a different approach and decided, ‘Let’s make it really colorful and bright because the shades are like that,’” Zomnir said. Inside, the wings of a blue butterfly, a symbolic figure that plays a role in the movie, lift up from the packaging. “Even if you aren’t attached to the film, the butterfly tells the story of what the makeup is all about, which is transformation,” Zomnir said.

Five limited-edition lipstick shades are unique to the “Alice Through the Looking Glass” collaboration. The lipsticks are $18 and feature the kaleidoscope pattern from the palette. “We did not do them last time. We are just so in love with doing lipsticks now that we decided to throw them in, plus it made a lot of since we’re doing [the palette] character-based, and there was an eye and lip story to tell with these characters,” Zomnir said.

After the palette and lipsticks make their debut on urbandecay.com, they will spread on May 5 to Sephora, Ulta Beauty, select Macy’s stores, sephora.com, ulta.com, macys.com and Beauty.com. No doubt, they will also be resold at a ferocious pace on eBay and comparable online outlets. Urban Decay’s “Alice in Wonderland” palette is still commanding top dollar on eBay, where it was recently found priced from $275 to $300.