Kiehl’s organic Açaí skin care collection is due out in mid-September. 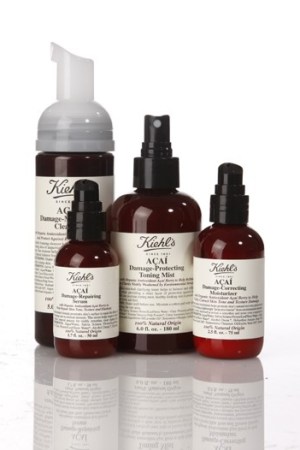 No. 21 to Debut Beauty Line by Celebrity Makeup Artist Ayako

Eye Candy: Women of Worth

Kiehl’s is going organic with the launch of its Açaí skin care collection, due in mid-September.

While many people assume Kiehl’s products are 100 percent organic, this line is the brand’s first organic skin care line, said Chris Salgardo, president of Kiehl’s USA. “Since our inception, we have always been known for our service and for creating efficacious products,” said Salgardo, noting that everyone asks for “green” products, but still demand high performance. “We heard that our customers wanted organics, that they wanted paraben-free, that they wanted natural — and they wanted to focus on the first signs of aging. We went to the lab to do all that. The result: our new Açaí line.”

Açaí was chosen, Salgardo said, because its “superior antioxidant properties” help combat environmental aggressors and stimulate the skin’s natural renewal process, yet the products are 100 percent natural. Grown in Brazil, Açaí has served as a food source for hundreds of years, said Salgardo. “Açaí is a powerful superberry, which means a fruit considered to have exceptionally high levels of nutrients, antioxidants and potential health benefits when compared to other foods,” he said. “It has high antioxidant levels to help reverse and prevent oxidizing free-radical damage to skin cells arising from environmental and lifestyle stress; it is among the highest in antioxidant capacity of any edible fruit and it is a broad-spectrum antioxidant, especially effective against superoxides and peroxyl free-radicals which produce oxidative damage on skin.”

The Açaí line has earned the endorsements of both Ecocert and gold-standard Cradle to Cradle, said Salgardo. While Kiehl’s product partnership with Brad Pitt — the Aloe Vera Biodegradable Body Cleanser — was said to be the first to get a Cradle to Cradle certification for a complete formula, Salgardo noted, it was at the silver level. He added that the difference between gold and silver Cradle to Cradle certification comes in the manufacturing process; to earn the gold level, companies must undergo additional aspects of the certification process, including a water and energy audit and a commitment to social responsibility on the plant side.

“We think that we will appeal to our existing customers, but also a new potential consumer base with this launch,” said Salgardo, adding that the products are best-suited for consumers who are noticing the first signs of aging — which generally equates to a consumer in his or her early- to mid-thirties.

The Açaí lineup will be available in September in about 250 specialty store doors in the U.S., including 33 freestanding Kiehl’s stores in the U.S. While Salgardo declined to discuss sales projections, industry sources estimated the line could do about $7 million at retail in its first year on counter.

The collection will be promoted heavily in-store, particularly in Kiehl’s freestanding stores. “We took a superhero approach with the promotion, which was inspired by Açaí’s superberry status,” said Salgardo, noting that the Pop Art-inspired visuals will feature stylized cartoon characters with conversation bubbles touting the line’s benefits.