Brad Pitt is out to shake up the beauty world by turning green into gold.

By Julie Naughton and Pete Born on August 18, 2008
View Slideshow 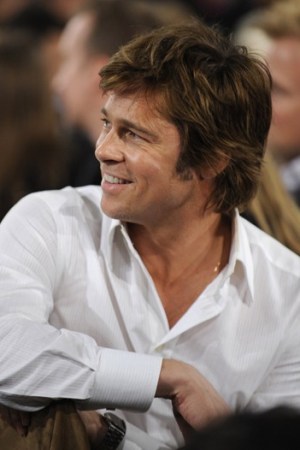 Brad Pitt is out to shake up the beauty world by turning green into gold.

This story first appeared in the August 18, 2008 issue of WWD. Subscribe Today.

Pitt has linked up with Kiehl’s Since 1851 in a deal that is bound to be copied by numerous other beauty firms eager to capitalize on the hype of a major celebrity to boost their brands. But, unlike past celebrity launches, Pitt’s name isn’t on the bottle, he won’t appear in the ads — and the sole purpose is to raise funds for charity rather than boost the incomes of the star and the beauty firm. This is a sea change in celebrity marketing: Instead of hitching a product to a celebrity’s name, companies now are signing on to the star’s worthy cause.

One hundred percent of the net profits from sales of Kiehl’s Aloe Vera Biodegradable Liquid Body Cleanser, due out in October, will benefit JPF Eco Systems, benefit JPF Eco Systems, a charitable foundation created by Kiehl’s and Pitt to support global environmental initiatives that “minimize impact on the environment through thoughtful design.” The 6.8-oz. cleanser, a permanent addition to the Kiehl’s lineup, will retail for $16.50 a bottle and is expected to raise at least $1 million for the charity. The cleanser will be sold in Kiehl’s full global distribution — about 500 doors, including Neiman Marcus and Nordstrom in the U.S. — as well as on Kiehl’s Web site.

Pitt’s Make It Right organization, which is helping to fund construction of environmentally sustainable and affordable housing in New Orleans for the displaced victims of Hurricane Katrina, will be JPF Eco Systems’ first beneficiary. Pitt and Angelina Jolie, through their Jolie-Pitt Foundation, support a number of causes, such as Global Action for Children (Jolie is an honorary chairperson) and Doctors Without Borders. The duo donated the reported $14 million they garnered by selling pictures of their newborn twins, Knox Leon and Vivienne Marcheline, to their foundation for distribution to charities.

“We have been a socially responsible company for more than 40 years,” said Patrick Kullenberg, general manager of Kiehl’s Worldwide, noting the company has used proceeds of various products to fund several charities, including YouthAIDS, over the years. “This partnership with Brad is an opportunity to illustrate that to our customers.”

Pitt will not be paid for his involvement, noted Roberta Weiss, senior vice president of global marketing development for Kiehl’s. “Brad is not a face, he’s a partner,” she said, calling the project “the biggest partnership we’ve done, in a lot of ways.” However, Pitt’s personal touch has been added to the label: the star’s handwriting is reproduced on the bottle.

According to Weiss, Kiehl’s and Pitt were strongly influenced by “Cradle to Cradle: Remaking the Way We Make Things” by architect William McDonough and chemist Michael Braungart. The duo are principals in McDonough Braungart Design Chemistry, which employs a comprehensive “cradle to cradle” design protocol to chemical benchmarking, supply-chain integration, energy and materials assessment, clean-production qualification, and sustainability issue management and optimization. “We shared a vision [with Pitt], to support this new way of thinking — being more eco-intelligent,” said Weiss.

“I particularly like working with Brad,” said McDonough, reached by phone Friday afternoon. “He is a designer. He has a great eye and sense of perspective. He loves design and has a passion for it.”

McDonough, who has been called a prophet of the sustainability and the clean technology movements, hinted Pitt’s deal with Kiehl’s could just be the beginning. “We’re seeing a whole movement in the health and beauty arena into an area that we call, ‘total beauty,’” he said. “We ask, ‘How can something be considered beautiful, if it is destroying the planet?’”

The Kiehl’s product is the first complete beauty item that is 100 percent Cradle to Cradle certified including formula and packaging, according to Weiss. It is made of readily biodegradable ingredients, added Kullenberg. “This means that the ingredients help to minimize our impact by biodegrading in the earth within 28 days. This timing conforms to strict OECD [Organization for Economic Co-operation and Development] guidelines on biodegradability,” he said. The cleanser is also free of parabens, sodium lauryl sulfate, sodium laureth sulfate and dyes, with a food-grade, postconsumer recycled bottle. The formula’s key ingredients include aloe vera, glycerin and coconut-derived cleansers.

McDonough, who was in Washington, D.C., confirmed the Kiehl’s item is the first complete product from a cosmetics industry manufacturer to receive Cradle to Cradle’s certification. He described the product as a “biological nutrient” and the recyclable plastic packaging as a “technological nutrient.”

McDonough said the connection with Cradle was made by Pitt. “It was important to Brad; he insisted.” The architect noted he has been working with Pitt on the New Orleans project to build 150 homes.

Not only Pitt, but Cameron Diaz, is involved in Cradle, he said, adding that “we have seen a lot of interest in Hollywood. Dozens of celebrities have read the book.

So, will the Pitt collaboration lead to additional celebrity-related projects at Kiehl’s? Only if they make sense for the brand’s mission, said Weiss.

“For us, it’s an evaluation based on shared commitment and interest,” she said, adding Kiehl’s had wanted to ramp up its involvement in environmental causes. “If something like that came up again, we would be interested, but this was never about being flashy and splashy with Brad. Our thinking is, if a celebrity can help us to spread the awareness, that’s fantastic. But it’s about the project itself, not a star.”

Of course, the star doesn’t hurt — especially one like Pitt who generates publicity with almost every move he makes. Linking with Pitt to focus on the environment is only likely to help Kiehl’s gain new fans, given that green is gold these days with younger consumers — from Wal-Mart and H&M to Barneys New York and Nordstrom and beyond.

And Kiehl’s isn’t the only company lately to realize the value in doing well by doing good, however. Celebrity hairstylist David Babaii (who, coincidentally, did Jolie’s hair for a recent Vanity Fair cover) has teamed up with Kate Hudson and Eco Beauty Ventures LLC for a new hair care line, David Babaii for WildAid, which also will be launched in October. The line will be sold in more than 10,000 mass, drug and food stores by the end of October and in 25,000 by April. Industry sources estimate that by year-end 2009, the collection will be doing upward of $60 million in sales. About 10 percent of the profits will be donated to WildAid, the animal protection organization.

The great-granddaddy of the beauty-charity fusion arguably is the MAC AIDS Fund, which has raised more than $100 million to date for HIV-AIDS research and outreach. Founded in 1994, the fund has had a long line of celebrity names — including Lil’ Kim, Stacy “Fergie” Ferguson, Pam Anderson, Christina Aguilera, Dita Von Teese, Lisa Marie Presley and Debbie Harry — associated with the campaign and the MAC Viva Glam product line, which donates 100 percent of its sales to the cause.