Avon Products Inc. and the Estée Lauder Cos. Inc. flexed their philanthropic muscles this week in separate functions supporting their efforts in women’s issues.

By Pete Born and Andrea Nagel on October 30, 2009
View Slideshow 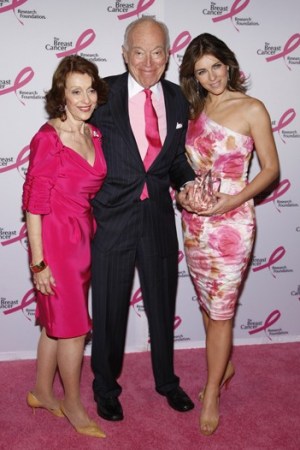 Avon Products Inc. and the Estée Lauder Cos. Inc. flexed their philanthropic muscles this week in separate functions supporting their respective efforts in funding women’s issues, most notably the fight against breast cancer.

At the dinner, which was held at Manhattan’s Cipriani 42nd Street Tuesday night and attended by 550 guests, the foundation’s president, Carol Kurzig, remarked how earlier that day Jung had inquired whether the foundation had reached its $2 million goal. Kurzig told Jung it had not, and subsequently Jung wrote a personal check of approximately $50,000 to help get it there.

The announcement was met with a round of applause, and the evening was off to a star-studded night.

Avon Honorary Chair Reese Witherspoon joined Jung in hosting the evening, which awarded dozens of people who have helped fight breast cancer and domestic violence throughout their lives. Founded in 1955, the foundation has donated and awarded more than $725 million.

Award presenters included many of Avon’s celebrity spokespeople and product partners, including Patrick and Jillian Dempsey, Courteney Cox, Lauren Conrad and Suze Orman. Recipients included Barbara Cicatelli and Kathy Gates-Ferris for their nonprofit work providing breast cancer screenings; Casey Gwinn for the establishment of Family Justice Centers to help victims of domestic violence; Kathleen Earle and Jennifer Torres for raising more than $300,000 with Avon Walk for Breast Cancer events; Patrick Firmenich for his generous support, and to “Push” author Sapphire and “Precious” actress Paula Patton for their creativity in raising awareness of domestic violence. A performance by Fergie, who on the red carpet became emotional when talking about what Avon means to her, capped the night.

“My grandmother was an Avon lady and she used to have the parties at her house and I would play with all of her products. When you’re young you really don’t think about what you’re saying and I asked my grandma when she died if she would leave me her Avon products in her will. Well, when she passed, all those years later, she did,” Fergie said, welling up with tears.

At founder Evelyn Lauder’s Breast Cancer Research Foundation symposium and luncheon Wednesday, Elizabeth Hurley got a pleasant surprise on her way to picking up the Humanitarian Award during the group’s annual event at the Waldorf-Astoria hotel.

Leonard Lauder, chairman emeritus of the Estée Lauder Cos. and Evelyn’s “proud husband,” was winding up his presentation of the award to Hurley when he paused and added, “We are not done yet.” Lauder then said that BCRF will pick a prominent breast cancer scientist in the U.K., who will be known as “The Elizabeth Hurley Researcher.”

Hurley, who has been traveling the world since 1994 promoting awareness and underscoring the need for more scientific research, not surprisingly replied, “You are my favorite man in the United States of America.” Hurley, who promised to persist in her missionary activities until the dreaded disease “is kicked off the planet,” added that her grandmother died of breast cancer in 1993, before Evelyn Lauder began distribution of her pink ribbons. In those days, people didn’t discuss cancer, let alone get screened for early detection. “It cannot happen today,” she concluded.

During the award portion of the program, 171 researchers were called onto the packed stage to receive a combined $29 million in grants. Earlier, doctors participated in a symposium to brief donors on the progress of their work. According to Evelyn Lauder and other organizers, the luncheon raised nearly $2 million, including proceeds from raffle tickets. That put BCRF about $100,000 ahead of last year’s fund-raising so far in this fiscal year, which will end on June 30.

Hurley’s work on behalf of the breast cancer campaign still leaves her time to pursue her other career as an organic farmer and an owner of a 400-acre spread in Gloucestershire, about an hour and a half west of London. Hurley is in the process of launching her own brand name of organic snacks at Harrods. She has 100-calorie organic oat bars with fruit and organic beef jerky, which contains only 74 calories. Each item, priced $1 to $1.50, is individually wrapped and emblazoned with a cartoon drawing of her wearing a miniskirt and shod in Wellingtons. The beef jerky, whose packaging shows her in a western hat, bears the added slogan, “Unleash your inner cowboy.”

Hurley said the items were conceived to be just nourishing enough to stave off hunger. “I find it hard to eat just one cookie,” she said, noting that the individual wrapping was designed to provide self-restraint. “I call them handbag snacks,” she said, adding that she plans on marketing them in tony resorts, high-end hotels and even on newspaper stands. She also would like to introduce the line in the U.S.