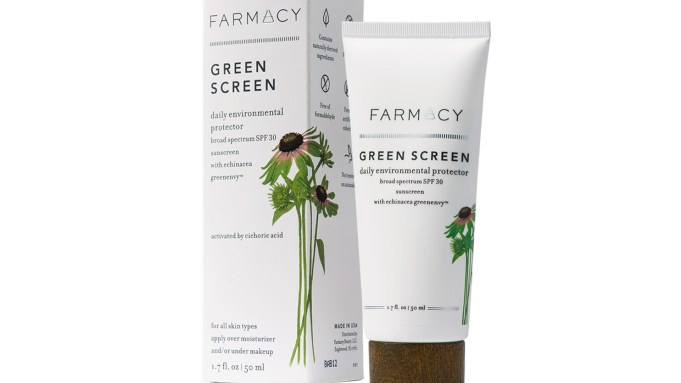 Is your iPhone making you look old? Perhaps — and beauty companies are bracing for it.

First there were products designed to fight “tech neck” — the neck skin that reportedly starts to sag from looking down at one’s mobile device too much — and now brands are quickly introducing products meant to protect skin from blue, or High Energy Visible, light, which is largely emitted from tech devices.

Even though science-wise, “the book is still being written,” said Marc Cornell, vice president of innovation and research and development at beauty product manufacturer Englewood Lab, beauty brands are being quick to jump on the trend. Blue light has two sources — screens and the sun — and brands are developing products to combat both. Already Murad and Make have sunscreen, moisturizers and serums billed to fight off blue light, and in the past few months, Farmacy, Derm Institute and Twinlab have added similar sunscreens, serums and supplements to their assortments as well.

The idea behind the trend is that blue light, part of the visible light spectrum, can penetrate skin more deeply than UVA or UVB rays, explained Cornell — and could potentially cause damage, as 20 to 30 percent of sunlight contains blue light. While HEV light can be blocked with a scattering agent, he said, (like zinc oxide or titanium dioxide, common sunscreen ingredients) or with a “biologic pathway” (aka botanical ingredients that can block the light’s penetration, like buddleja officinalis flower extract), there is still the damage from smartphones to take into account.

“Given all of the data we have about ultraviolet light and its negative effects on the skin, scientists are starting to focus some attention on damage caused by other forms of light, like HEV light,” Dr. Jessica Weiser, a dermatologist at New York Dermatology Group, weighed in.

She noted that although HEV light doesn’t contribute to skin cancer because it doesn’t induce DNA mutations like ultraviolet light, studies show an increase in pigment production that could lead to uneven skin tone and hyper-pigmentation. Some studies even suggest that HEV light might speed up skin aging, she added.

Dr. Timm Golueke agreed. He said blue light releases free radicals, which lead to a decrease in collagen. Ultimately a slowdown in collagen production results in a loss of volume in the face, a telltale sign of aging.

Golueke suggested the use of mineral sunscreens to protect from blue light, as well as antioxidants like Vitamin C that help reduce the free radicals activated by UV rays, urban pollution and blue light.

While doctors believe the constant radiation build has a cumulative effect (unlike a sunburn, the damage won’t show up the next day), the definitive effects on one’s skin from blue light are still a grey area.

For the time being, antiblue light products are making off-label marketing claims, or claims that are not regulated by the U.S. Food & Drug Administration, Cornell said. But that doesn’t mean that labs and brands haven’t begun testing.

Mark Veeder, cofounder of Farmacy, would rather not take the risk when it comes to blue light.

“No one has done studies of the effects of blue light on skin but we know that it goes deeper than UVA and UVB. So why not better safe than sorry?” he said.

Farmacy Green Screen, which launched in March, is a $36, antiaging SPF that reportedly protects against UVA and UVB rays and blue light. To protect against the latter, product was infused with marigold extract, an ingredient said to be effective in blocking blue light because of the carotenoids lutein and zeaxanthin that could be found in it.

“Look, back in the day we didn’t know a lot about UVA and UVB [rays], and as more information became available people said, ‘I better do something about this.’ I think this is going to become a mainstream skin-care movement,” Veeder said of blue light-blocking products.

In addition to rampant smartphone usage, the trend seems to be a byproduct of modern times.

“There have been a few new need states, or sources of anxiety recently, and this is one of them,” said Lucie Green, worldwide director of The Innovation Group at J. Walter Thompson Worldwide. “It’s part of a wider trend where people are getting concerned about the realities of modern life…People [are thinking about] what their busy work and heavy texting lives are doing to them from a stress point of view, beauty point of view and aging point of view.”

It’s this cultural stress, a topic Murad founder Dr. Howard Murad has been outspoken about for decades, that is a catalyst of advanced aging in one’s skin. He has done talks across the country and even published several books — including “Help! A Robot Took My Job” and “Silencing Our Cell Phones” — about the effects of cultural stress.

For him, a smartphone-obsessed society — with professions that often require long stretches of time in front of a computer screen — has only exacerbated the problem.

“When you look at skin care most people just look at it [purely] as skin care, but at Murad we look at all of humanity. What’s happening in your life is not just, ‘OK, we need to protect our skin.’ Life is changing. We have cultural stress and stress of modern living, and we’re spending more time on our cell phones. We’re sitting more,” said Murad, adding that the brand has developed two products that target blue light. They are City Skin Age Defense Broad Spectrum SPF 50, which contains Lutein, and City Skin Overnight Detox Moisturizer, formulated with Marrubium.

“We’re spending, on average, 11 hours a day in front of a screen. Eleven hours. I have a blue light [shield] that protects me from the blue light damage from my screen. There are settings on our phones too, but at the end of the day we’re still spending 11 hours in front of a screen,” said Naomi Whittel, certified nutritional consultant and chief executive officer of Twinlab, a vitamin and supplement manufacturer.

Research conducted by Twinlab has shown that certain ingredients have the power to impact cognitive and eye health, especially lutein and zeaxanthin, which can be found in spinach, kale and marigolds. And when taken in supplement form, Whittel explained, these nutrients can benefit an individual spending screen time at the levels indicated above. Studies show that lutein and zeaxanthin can reduce eye strain, eye fatigue and even headache frequency.

“You can eat about two cups of spinach every day to get the levels of lutein that you need to protect the eyes and our cognitive function or you can take supplements…Any time there is a dark green, leafy veggie — [like] spinach and kale — these have naturally high levels that actually enhance and provide the lutein and zeaxanthin to our bodies. It’s very hard to get these nutrients from your food alone because of the amount you would have to eat,” Whittel said.

With respect to skin care, she cited Eminence’s stone crop collection of products that are infused with a detoxifying micro-green complex. The combination of broccoli, radish and clover sprouts and detoxophane from Swiss Cress Sprouts that comprise the complex are very supportive of lutein and zeaxanthin, Whittel said.

But for Twinlab, the approach to create products that combat the effects of blue light focuses on the supplement angle. Development of these supplements began last year, and in June, a three-product Blutein range launched. Blutein Protection, $29.99, acts as a nutritional filter against blue light from phones and computers; Blutein Chewables, $19.99, is a gummy version designed for children, and Blutein Performance, $34.99, protects against digital eye strain but also has caffeine to support faster mental processing and reaction.

Then there is Make, which has positioned itself as a brand looking to tackle the skin stressers that come with a 21st-century lifestyle.

The brand aims to block out HEV and infrared light with its Moonlight Primer, $55; and Tech Essential Moonlight Neck Repair, $52, which launched in April.

“Moonlight Primer…contains a vegetable melanin that has been shown to protect against the blue light from screens and tablets and televisions,” said Adrienne Penna, director of product development, skin care, at Mana Products, Make’s parent company.

She maintained that the neck product uses kigelia and acacia gum extract to firm skin and provide antioxidant and antiaging protection.

“We were talking about it, and I said, ‘this is a product we should talk about because no one’s really talking about how harmful [blue light can be],’” Penna noted.

However, she believes the blue light being blocked out is different than the kind coming from antiacne LEDs.

“The blue light that’s used for acne is specific and measured dosages of the light — it’s the exact wavelength to kill the acne-causing bacteria,” she said. “The blue light you get from devices is ambient, difficult to control and difficult to quantify.”

Annie Hsu, director of operations at Derm Institute, admitted that although blue light is “pretty new” as a skin-care concern, studies show it could do more damage than sunlight.

As a result, the company released its Youth Alchemy Eye Serum with a proprietary Liposhield HEV technology that acts like a “super free radical scavenger.” Hsu likened it to an antioxidant that prevents the effects of ROS, or reactive oxygen species, and defends from UVA, UVB and any HEV damages. Hsu added that clinical studies conducted by the brand supported this claim.

For now, though, Hsu said the technology will start with eye serum. She wants to make sure that adding Liposhield HEV will have the same results if added to different products.

“We need to think about adding it into SPF as another projection because we are in a transition period where everyone is updating their life and home to LEDs [screens] and that really affects your whole entire body and skin. Sooner or later more companies will think it’s a trend and start coming out with more products targeting blue light damage,” Hsu said.

Then again, not all experts agree blue light protection is a need.

“The skin itself isn’t really at risk,” said New York dermatologist Dennis Gross, who noted that screen technology has changed in recent years.

More pressing, in his view, is the way screens can hinder sleep.

“It can affect circadian rhythm in people, it affects melatonin levels, which can make you have insomnia,” Dr. Gross said.

Despite these skeptics, companies are keeping a close eye on the trend. For Green, the widespread introduction of blue light protection products by beauty brands — and in turn adoption by consumers — will, in the end, depend heavily on the research.

“It’s fairly nascent still,” she said. “If credible scientific research emerges…it could be positioned as the new UV — it could be explosive.”