David Pollock is introducing a range called Pur Attitude to retailers this spring. 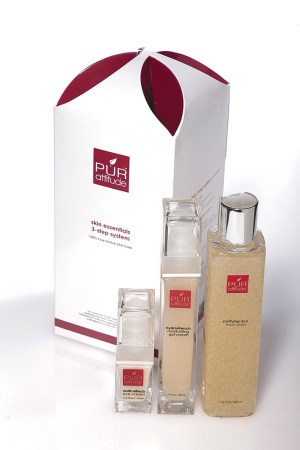 Fort Lauderdale, Fla.-based chemist and beauty executive David Pollock believes water-free is the way to be.

The scientist, who has worked with a number of large beauty firms over the last two decades, is introducing a water-free skin-care range called Pur Attitude to retailers this spring. In Pollock’s view, water as an ingredient is relied upon too heavily in skin-care formulations, and ultimately reduces product efficacy.

“Each of my products is 100 percent active and has the highest levels of actives available to boost collagen and reduce wrinkles,” said Pollock. Rather than water, each product is infused with a proprietary hydrating complex called Hyaluronix, which he said is naturally found in almost every cell of the human body. “We know that skin can absorb up to 60 percent of what is put on it and water just dilutes the actives,” said Pollock. “Hyaluronix draws moisture from the air and binds up to 1,000 times its weight in moisture.”

According to Pollock — who specializes in the delivery systems of antiaging skin care and has created products for brands including Bliss, Smashbox, The Art of Shaving, SkinCeuticals and Lancôme — the proper delivery system is also key. “The biggest challenge is how to deliver ingredients because most ingredients don’t go below the surface of the skin,” he said. “Our delivery system is designed to mimic ingredients in the skin to cross the lipid barrier offering time-released nourishment.”

Pollock’s debut Pur Attitude offering, the three-piece Skincare Essentials kit (comprised of a face wash, moisturizer and eye cream), rolled out to purattitude.com in October. Since then, he has introduced the firming gel InstaResults and Wild Durian Fruit Peel, designed to detoxify impurities. His newest product, a serum called Fountain of Youth, will launch online later this month, and an Energizing Oxygen Serum will be added in June.

Pollock plans to take the entire Pur Attitude range — which is housed in glass flacons and color-coded origami-inspired outer packaging — to retail distribution in the spring, initially launching to about 300 specialty retail doors.

Although the brand would not break out figures, industry sources estimate the collection — which ranges from $18 for a cleanser to $90 for a serum — could generate between $5 million and $8 million between January 2013 and 2014.

Pollock’s also been on a mission to educate consumers about the ins and outs of the beauty industry: In July 2010, he wrote a book called “Stop the Lies,” and launched a Web site called justaskdavid, where he doles out beauty advice. Starting Tuesday, Pollock will begin hosting his own syndicated radio show, which will air on 152 broadcast stations, Internet radio and SiriusXM. “The biggest question I get asked is, ‘Does skin care work,’” said Pollock. “The answer is, the right product does.”