Neom is targeting the same stressed-out customers who are buying its candles, essential oils and fragrances.

LONDON — Neom, the British wellness brand built around essential oils and natural ingredients, is breaking into the skin-care market in September with products aimed at stressed-out skin, and plans to expand in the U.S.

Cofounder and creative director Nicola Elliott started Neom 14 years ago after calling time on a magazine career at U.K. Glamour, where she was working on beauty, fashion and celebrity features. The travel, bad eating, stress and lack of sleep became too much, so she trained as an aromatherapist and nutritionist and started the brand with 15,000 pounds, alongside cofounder Oliver Mennell.

So far, Neom’s focus has been on wellness, and the brand was one of the first movers in the space. Indeed, Elliott was so early on the wellness trend that she can recall carrying two carrots in her handbag — one all-natural, the other not — so she could explain to spa therapists the difference between organic and non-organic products.

“It was like pushing water uphill with a fork when we started out. The whole thing was really, really tough,” said Elliott, who started with one all-natural candle and eventually expanded into home fragrance, bath and body and a “scent-to-sleep” range of oils and balms.

As the company sets sights on expansion, the time had finally come to apply Neom’s wellness ethos, and natural ingredients, to skin care.

“Skin is a biggie for us, and we had been looking at the category for years. The power we have put behind this launch is infinitely more than we have done with anything else,” said Elliott, adding that Neom wanted to approach skin care from the inside, out. “People are now coming to understand that their lifestyle and well-being needs are linked to their skin, so with the new line we wanted to look at four categories: poor sleep, stress, lack of energy and mood. You can (mitigate) the effects of those lifestyle issues in a natural way.” 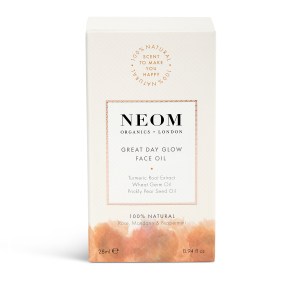 There are three ranges: Ultimate Calm, which aims to de-stress skin; Great Day Glow, a booster for dull, dry skin that spends too much time indoors, and Perfect Night’s Sleep.

Prices range from 25 pounds for the face wash to 45 pounds for the serum. Ingredients in the Ultimate Calm collection include pomegranate seed oil, mallow flower extract, and lavender, geranium and rose essential oils.

Before making a sale, Neom plans to ask customers to take a lifestyle test so they end up with the right products.

“It is pretty simple and allows them to make a little mood board of their lifestyle,” Elliott said. “We are going to ask, ‘Are you living in the town or the country? Do you suffer from a huge amount of stress? Are you sleeping well?’”

Neom Natural Skincare products will be available to purchase from September. Neom has inked a venture with digital beauty platform The Hut Group, owner of brands including Glossybox and Espa, as part of the launch.

Neom has big ambitions for skin care. About 60 percent of the business revolves around home products, with the balance coming from bath and body. Elliott said body is growing twice as fast as home, leading her to believe that Neom’s customers are “coming to us more for well-being, rather than just a ‘product.’”

She said the plan is for sales to be divided evenly between home, body and the new skin-care collection.

Products are developed in-house, and Elliott said she also relies on a panel of women who are constantly rating, reviewing and feeding back their reaction to the products.

“We are organic as we can possibly be, and where we are not organic, we are as natural as we can be. I think that natural ingredients work ten times better. Why would I want a synthetic vitamin A when I can get a natural version, the purest form of the vitamin A?” she asked. 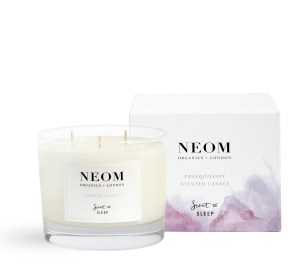 As the well-being, organics and all-natural wave has swelled, Elliott said she’s proud of Neom’s practical approach to products and customers. “We were never about doing yoga at 6 in the morning with a green smoothie — and the size 6 crew. I think that we are very much for that woman who wants to feel better and the products are everyday things that busy, modern, practical women can benefit from.

“That is hopefully the way that we are seeing Neom evolve, into something that is a bit more attainable and personal, that doesn’t feel like this lofty difficult thing to do that is just another thing to slog through your day,” said Elliott, who is based in Yorkshire and works between there and London.

The company plans to go live with a dedicated U.S. site later this year. The move is a natural one, she said, as about 25 percent of the U.K. website traffic comes from the U.S.

More stores are in the pipeline, too. Neom has four U.K. standalone stores, two of which are equipped with spa and treatment rooms. Stockists include Selfridges, John Lewis, Brown Thomas and Fenwick.

Hotel spas that stock the products include Four Seasons, W Hotels, the Ritz-Carlton and Shangri-La.

Elliott and Mennell own Neom and count Piper Private Equity, whose investments include Monica Vinader and Bloom & Wild flowers, as an investor. Retail sales were in excess of 25 million pounds in 2019.

The brand has also named Emmanuel Osti as chairman. Osti is the former managing director of L’Occitane. “We have got really big ambitions. It feels like there is a tailwind behind us now and we are going to really go for it,” Elliott said.