“I’ve always wanted to come out with my own line of skin care,” said Carmen Electra of her new beauty venture, GoGo Skincare.

She’s named the brand after a song Prince wrote about her, “Go Go Dancer,” off her 1993 self-titled debut album. While most recognize Electra — born Tara Leigh Patrick — as an actress and dancer, her career began in music. Prince, who produced the record, had signed her to his music label at the time and made her his protégée.

“It just stuck with me,” Electra said of the title. “I’ve always wanted to use the name Go Go.”

The beauty brand, out today, is a three-step skin-care system: a serum, eye cream and moisturizer. Vegan and cruelty-free (as well as free of sulfate, paraben and gluten), the line includes the use of Optim Hyal, created by supplier Sederma to utilize the optimal level of hyaluronic acid, and B9-Vitapol, a reformulated form of folic acid created by Labio Co. Available direct-to-consumer at GogoSkincare.com, the trio of products costs $149.95 total or $99.95 for a yearly subscription.

“These ingredients are trademark blends that are very expensive, and we’ve been able to incorporate them in our products and keep the cost down for customers,” said Electra. “[The development process] was about me trying these products over and over and over again to get it right. This is something I have such a passion for.”

She also has “a love for makeup” and foresees releasing a line of cosmetics next: “Overall though, we want to have really beautiful, glowing skin underneath so that the makeup looks really good on top. And when you wash your face off, you still feel confident about your skin.” 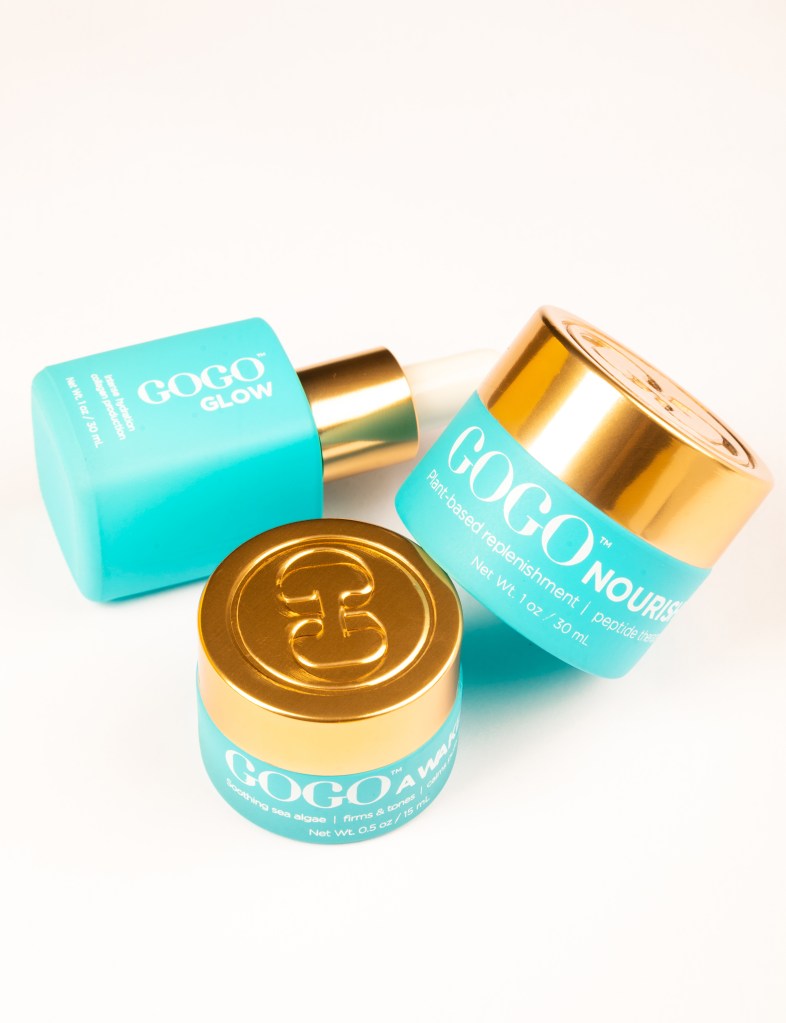 She’s been in the entertainment industry since the Nineties, rising as one of the stars of “Baywatch,” the hit TV drama series. With that spotlight, though, also came Hollywood’s unrealistic beauty ideals, she admitted.

“In this business, you know, everyone is always watching you,” Electra said. “There’s a lot of pressure when you step out there on the red carpet or people asking in general, ‘What do you do? What’s your skin-care regimen?’”

Her regimen these days prioritizes health, she said. Throughout the years, she’s stayed surgery-free.

“I don’t want to have surgery,” she added with a laugh. “I think it’s one of the most frightening things ever. And I don’t put anyone down that has gone that route. I just don’t want to go down that road.”

While home in Los Angeles amid the pandemic, she’s been reminiscing on her “Baywatch” days lately for a documentary by directors Matthew Felker and Randall Lobb (a release date has yet to be revealed).

“I invited the ‘Baywatch’ documentary crew into my house,” said Electra. “We had such an amazing time reflecting on that era, the Nineties, what was happening, what music people were listening to and how ‘Baywatch’ was this American dream…Literally, ‘Baywatch’ was the number-one show in the world. Your exposure goes worldwide. It was a life-changing experience for me.”