Clinique’s Moisturizing Lotion Gets an Update

Redubbed with a plus symbol after the name, the brand's Dramatically Different Moisturizing Lotion will be relaunched this summer with global media fanfare. 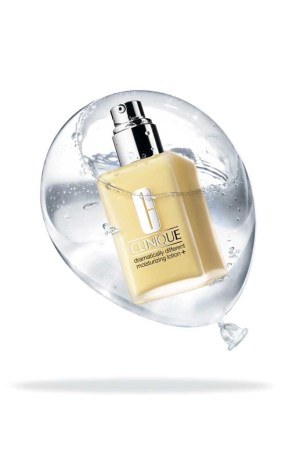 Forty-five years old and still on top, Clinique’s powerhouse Dramatically Different Moisturizing Lotion has been retooled and given a new lease on life.

Redubbed with a plus symbol after the name, DDML will be relaunched this summer with all the global media fanfare that the Estée Lauder Cos. Inc.-owned division can muster, including network and co-op TV, social media and heavy sampling.

The company is investing heavily because the size of the business is huge and so are the stakes. Industry sources estimate that sales could be increased by 50 percent.

DDML is the heart of Clinique’s trademark three-step skin-care system, which has been the cornerstone of the brand since its inception in the fall of 1968. The product is billed by the company as the number-one prestige market moisturizer in the world, while still maintaining high- single-digit sales gains in mature markets and double-digit hikes in developing countries. Lynne Greene, an Estée Lauder group president whose duties include Clinique, was succinct in explaining why an update was needed. “One of the reasons that we actually wanted to change the product is that the world changed,” she said, adding, “The world has changed and how does this product meet the new world? Skin gets dehydrated faster today in this world because of the pollution and [other] factors. We needed to put more hydration into the product.”

Agnes Landau, Clinique’s senior vice president of global marketing, said the company worked with Dr. David Orentreich, the son of Clinique’s original scientific guru, and asked him what a modern version of the product would need. He said to increase the hydration, but you want to increase skin’s ability to hold on to that moisture, Landau recalled.

One of the reasons the product had not been updated was that consumers loved its texture and absorption ability and the company was afraid of altering those characteristics. “How do you change one of the most-loved products without alienating your existing customer base?” asked Ricardo Quintero, senior vice president and global general manager of market development.

The answer was 100 formula tests over a six-and-a-half-year period and the result was a 50 percent increase in hydration and a 54 percent improvement in the all-important moisture barrier. The moisturization was amped up by adding contemporary ingredients like hyaluronic acid, glycerin and urea. The moisture barrier, which prevents hydration from escaping, was strengthened by adding sunflower seed cake, barley extract and cucumber extract.

“The skin is being assaulted in a different way and that is why the skin needs the increased strength,” Greene said. “If a moisturizer wears longer, it protects your skin longer so your skin can stay stronger.”

Just to make sure that there would not be a customer revolt, Clinique surveyed 1,600 “existing, lapsed and competitive users” in five countries — the U.S., U.K., France, China and Japan. The verdict? They “loved it,” Greene remarked. To make the point on the need for a strong moisture barrier, Clinique shot an ad showing a DDML bottle resting inside a water-filled balloon. To make the redone product more tempting, the price was raised by only $1 — from $25 to $26 for a 4.2-oz bottle.

In the U.S., Dramatically Different Moisturizing Lotion+ will be launched in August supported by TV and print advertising in the September issues of magazines. In Clinique’s 149 markets around the world, the product will roll out between July and September.

While the company does not divulge budgets or sales forecasts, industry sources estimate that Clinique is making a huge effort. They calculate that the global war chest for total advertising and promotion could hit $80 million for the first full year. This could generate retail sales of $300 million for the first full year, industry sources calculate.