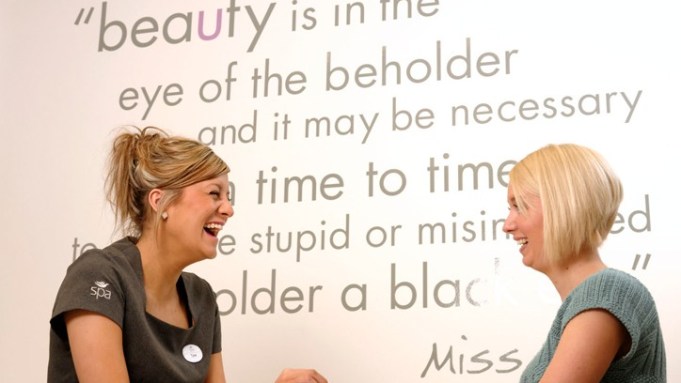 Dove’s “Real Beauty” campaign is going brick-and-mortar in North America with the introduction of Dove Spa in Canada next month.

The first Dove Spa is slated to open on Oct. 15 in Oakville, Ontario. Fay Chapple, managing director of Dove Spa Canada, said that plans call for 50-plus Dove Spas to open across the country over the next five years. The 2,600- to 3,000-square-foot locations are ideally placed in bustling town centers or on prime suburban roads, she said.

Dove Spa’s theory is that women are attracted to a personal approach at spas characterized by customizable treatments intended to address their true concerns. In Canada, Dove Spa is owned and managed by Spa & Salon Canada DS Inc., a division of Spa & Salon International.

“At Dove Spa our philosophy is simple — we want to celebrate the beauty of real women and do everything we can to help [them] look and feel great,” said Chapple.

Each client is offered a two-step treatment diagnosis during which a Dove Spa therapist finds out about a client’s feelings, expectations and lifestyle, and then conducts a skin test with a dermascope machine to measure oil, elasticity and pigmentation. After the diagnosis, services ranging from facials and body treatments to holistic therapies and massage are designed for the client.

The Dove Spa Professional skin care portfolio contains eight collections for both face and body that can be tailored for skin types and needs. The manufacturing firm Creative Outsourcing Solutions International developed the skin care products for Dove Spa. Other brands featured at Dove Spa in Canada are SpaRitual for nail care, St. Tropez for sunless tanning and I Nuovi for makeup.

The Dove Spa Canada aesthetic is clean and neutral, with light flooring and white being a prominent color. Ramsin Khachi, a principal at Khachi Design Group and Khachi Interiors in Ontario, created the design.

The Dove Spa concept has been vetted in the U.K., where a day spa was launched in spring 2006 and has expanded to 15 units. The expectation is that the U.K. chain of Dove Spas could grow to 100 units, said sources. Dove Spa operations in the U.K. are controlled under a licensing agreement by Serve Health & Beauty, the owner of the largest chain of beauty salons in the country named re-aqua. Unilever Ventures, a venture capital firm backed by Unilever that is managed independently, has provided investment.

Dove’s parent company, Unilever, initially conjured up the Dove Spa concept roughly six years ago as a vehicle to further promote its “Real Beauty” campaign, which features ads with women who were not models and who are of all sizes and shapes, and to capture spa goers that the message appealed to. Although the U.S. had been considered a target for Dove Spa, the decision was made that the most appropriate country to kick off Dove Spa was the U.K. because there was room in the middle market for a new spa outlet. Canada is viewed as strong for Dove Spa because the $1 billion spa industry there has been increasing 17 percent annually, the company said. The Dove brand also ranks among the top two health and beauty masterbrands in Canada.

In the U.K., the Dove Spa has reported that 30 percent of revenue is generated from retail and 70 percent via services. Also in the U.K., Creative Outsourcing Solutions International has disclosed that the Dove Spa products were 50 percent ahead of budget in their first week of sales, a figure that indicated the Dove Spa brand was resonating and spurring spa product purchases.