Estee Lauder's venerable Advanced Night Repair is taking a flying leap into the future this summer. 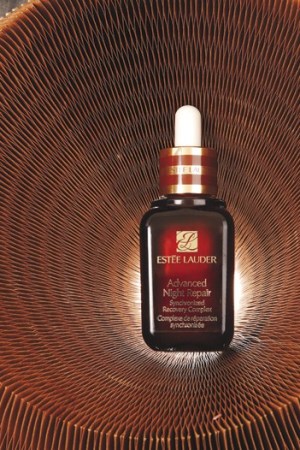 Estée Lauder’s venerable Advanced Night Repair is taking a flying leap into the future this summer — one that is expected to nearly double the sales of the company’s top-selling skin care franchise.

Advanced Night Repair Synchronized Recovery Complex, which will hit counters globally in July, is intended to provide cutting-edge technology — including a handful of new patented processes — for past damage, as well as help prevent future damage to skin cells and DNA.

While none of the executives would discuss sales projections or advertising spending, industry sources estimated the complete Advanced Night Repair family — which also includes a serum, an eye cream, a concentrate and an Asian whitening product — does about $225 million at retail globally. The new product on its own could do as much as $150 million at retail globally, with $30 million or more of that figure to be done in the U.S.

The key scientific differences between the current formula and the one launching in July: the synchronization of what are called “clock genes,” and what Daniel Maes, the soon-to-be-retiring senior vice president of research and development for the Estée Lauder Cos. Inc. [see related story, below], calls a “designer peptide.”

To harness that knowledge, Lauder created a proprietary, patent-pending technology called Chronolux Technology, which is a scientifically engineered amino acid sequence said to get all of the skin’s clock genes to synchronize. “As you age, the synchronicity gets thrown off,” said Maes. “Cells get damaged and this accelerates the visible signs of aging. This technology regulates that process, so that cellular repair happens at exactly the right time for maximum efficiency.”

That science is backed up by an encapsulated version of Alkyl Guanine Transferase, or AGT, a repair enzyme intended to repair visual damage from all known major environmental assaults, particularly toxins and chemicals.

The product is intended to be used by consumers of all ages and skin types. “Our position is that all skin aging is caused by DNA damage, and that is what this product is intended to repair,” said Maes. Added Daniel Yarosh, senior vice president of research and development, basic science research for the Estée Lauder Cos.: “This is the next frontier in skin care: understanding how DNA relates to cell response.”

Sources estimated that Lauder would spend $30 million on advertising and promotion worldwide in the product’s first year on counter. The advertising plan includes several iterations of a print ad — being executed in spreads and four-page inserts — which features the product as hero and the franchise’s “sleeping beauty,” model Hilary Rhoda. The first print advertising will drop in August fashion, beauty and lifestyle magazines globally, with placements to continue throughout the fall, said Elana Drell-Szyfer, senior vice president of global marketing for Estée Lauder.

Rhoda has also filmed a TV ad for the product, which is expected to be run as co-ops with participating retailers this fall. It will also run heavily in Asia, one of the brand’s strongest skin care markets, said Drell-Szyfer. A strong Internet campaign will also be part of the advertising and promotional war chest, she noted.