Face Time at CES: For P&G, L’Oréal and Neutrogena, Skin Is Still In

Before and after the Opte tool was used on a live model's face at the P&G demo station.

If “skin” was a major theme for the beauty sector at last year’s CES, the mega technology conference in Las Vegas, this year’s edition makes one thing crystal clear: Skin is still in.

Increasingly, it looks like big beauty companies are fashioning themselves into hardware makers, with the likes of Procter & Gamble and L’Oréal making CES an essential stop in their quest to fix everyone’s faces.

At a press conference on Sunday, P&G showcased several of its projects, including heated razors, smart AI-based toothbrushes, toilet paper bots and other items. But the scene stealer was its updated Opte Precision Skincare System, a technology that effectively erases blemishes.

A CES 2020 Innovation Award honoree, the high-tech beauty tool analyzes skin tone and condition, and then deposits customized micro-doses of foundation and serums. The unreleased first version gained a fan following since its introduction last year, but the newest version had tech reporters and beauty bloggers alike dropping their jaws at the demo station at the Mandalay Bay convention center.

With a few passes of the device, the spots and freckles on the live models practically vanished.

Unlike the original, which worked with a fair or light skin tone only, the new Opte works with different skin tones, from fair to dark. The updated version also deposits serums, allowing subjects to both cover flaws and treat them, and casts colored light while applying them. For instance, in the before-and-after photo, a blue light shined at the tip of the instrument as it deposited the formulation onto the skin.

At the crowded demo area, a simple towel swipe of the face revealed how little make-up was actually deposited — a trace amount so minute, it was practically unnoticeable to the naked eye. 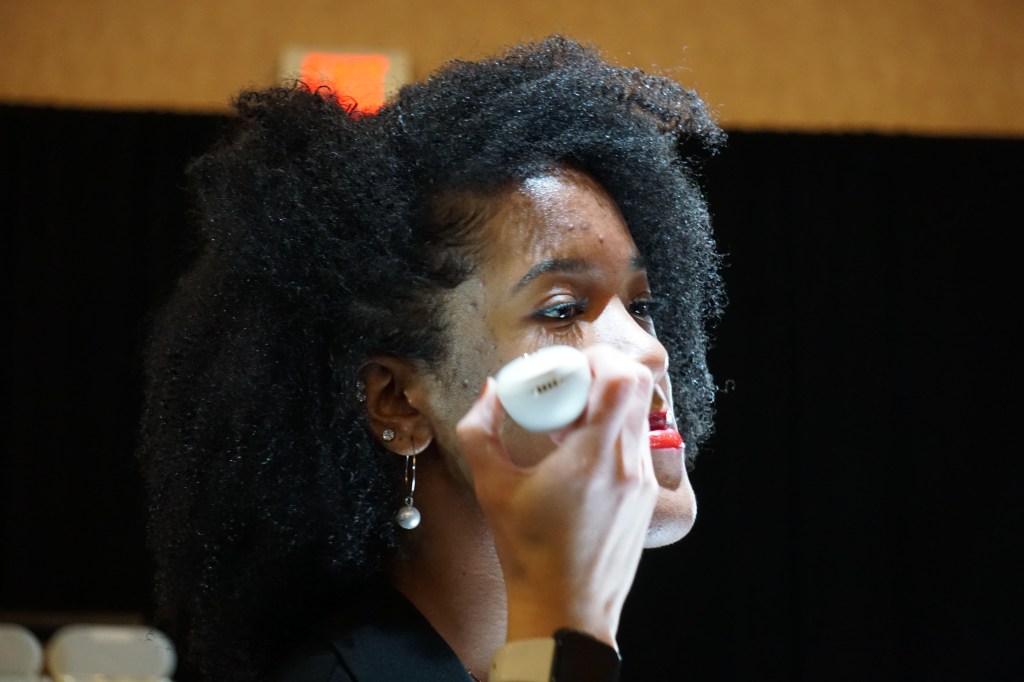 Therein may lie the reason why Opte has become an object of fascination in places like Asia, which caters to a massive skin-care market, and among an unexpected demographic: men.

“What personally I found interesting was how interested men have been in this product,” Lauren Thaman, director of communications for P&G Ventures, told WWD. “Obviously we’re targeting women. But last year at CES, some of the most interest came from the men who used it on their skin. It’s because it’s not makeup. And so they are able to use it on their skin and cover hyperpigmentation or other differences, and no one [would know].”

Granted, the foundation used is indeed makeup, but not in the way it’s traditionally applied. And so, there are no sponges and no threat of caked-on layers being visible.

Opte uses the same tech that powers inkjet printers to deposit cosmetics, an idea conceived and developed by Thomas Rabe, research fellow with P&G Ventures. The lightbulb moment came one day when he was evaluating photos and working with Photoshop software.

“More than 90 percent of your skin’s flawless, but you’re just trained to think that it’s more than this, because the human eye is really trying to pick it out in production,” he explained. “If you’re hiking and looking at this amazing landscape, you’ve got this beautiful image. And there’s a piece of trash in the corner of that image. Your eye’s going to notice that piece of trash. It’s just trained to identify the imperfections.

“Once I realized [that], I asked, ‘Why are we covering 100 percent of your skin?’” he added. “So that’s the insight behind trying to create a device that was smart enough to identify just the 10 percent of the skin that really needs to be corrected, leaving 90 percent of your skin free to breathe. It feels and looks like nothing’s on your skin.”

Among the updates are software improvements that processes skin images 30 percent faster, the company said, as well as upgrades to improve the user interface, as well as the OLED display.

There’s another distinction between this version and the previous one: This model will actually launch officially, with a 2020 release planned. Pricing details have not been finalized, but P&G expects the cost to land somewhere in the $600 range for a starter kit comprising one device and one serum cartridge, which should last roughly two months. 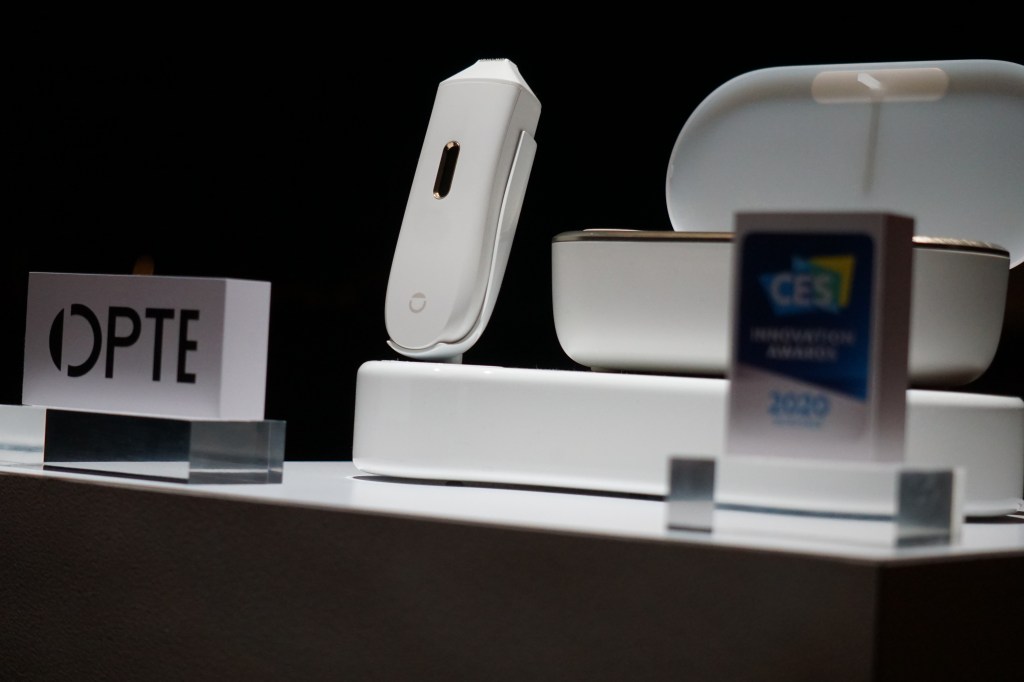 The Opte beauty tool will be released in 2020.  Adriana Lee

Elsewhere at the show, L’Oréal was preparing to debut a new device of its own. 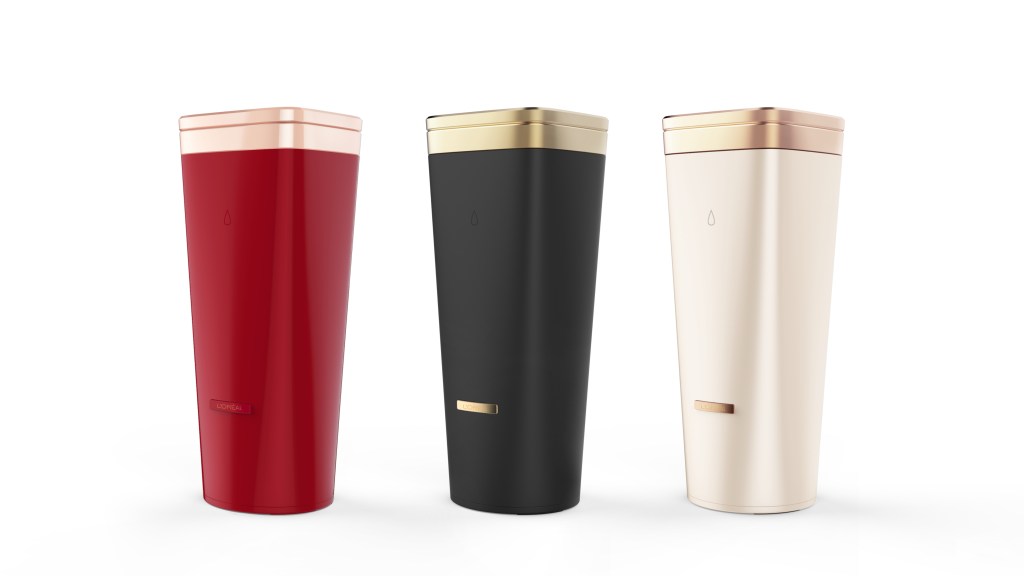 When Perso arrives in 2021, the head-turning feature for shoppers may be its size — unlike Custom D.O.S.E and Le Teint Particulier, the wee unit is intended for home use or on the go, thanks to a snap-off section at the top of the gadget.

The small size belies the tech inside.

Perso uses three color cartridges that mix to match the subject’s skin tone. Users can identify which three colors to start off with, thanks to artificial intelligence-based skin analysis performed by L’Oréal’s mobile app. The process is as simple as taking a selfie, with the results capable of pinpointing issues like lines, radiance and wrinkles.

Once armed, the gizmo can produce small amounts of highly personalized foundation on the fly. 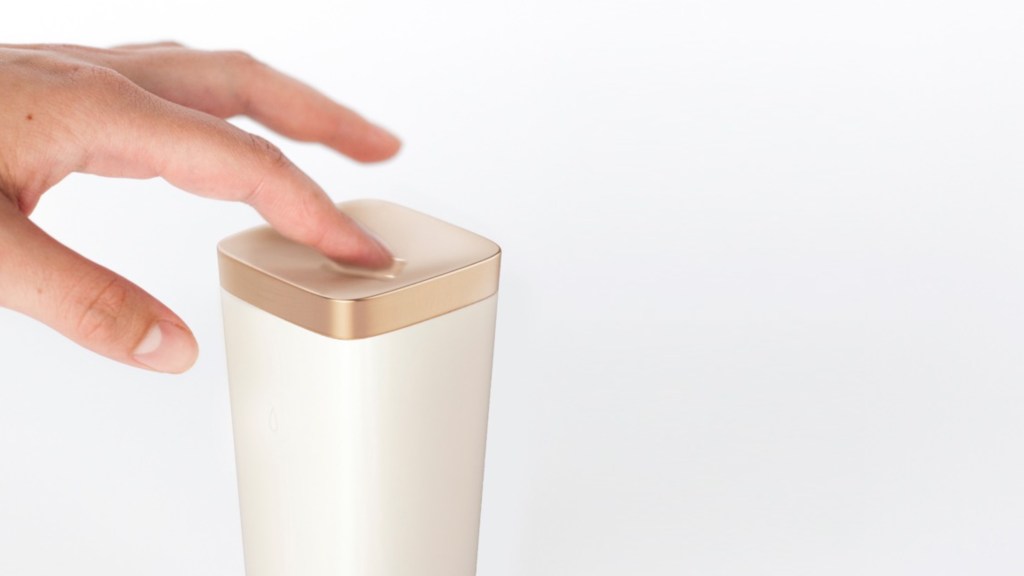 Perso dispenses at the top of the unit, and the upper part pops off, so users can take it on the go.  Courtesy image

“We custom-designed a miniaturized motor that allows you to push this formula up from the device,” said Guive Balooch, global vice president of L’Oreal Technology Incubator. “They’re all NFC-tagged, so you can get information as soon as you pop it in, as to what the cartridge is and how much is left on the formula.”

Beyond cosmetics, the company also offers a skin-care version. The analysis considers environmental factors, such as air quality, pollution, UV and humidity, from within a five-meter radius of the subject’s location, as well as skin issues noted by the user. That all feeds into recommendations that determine levels of moisturizer, SPF and other active ingredients. Perso can track changes over time and adjust actives.

“The lipstick is much more about expression,” Balooch continued. “When we talk about inclusivity, it’s about empowering consumers to express themselves without having to buy 1,000 products to do it.”

Similar to the foundation application, the liquid lipstick comes courtesy of pop-in cartridges. “If you want to go from pink to very dark purple, you have thousands of options in between. You get a very light pink cartridge and red and a dark purple cartridge or a brownish cartridge.”

Once again, the mobile app is the lynchpin for lipstick mode. Users can see the latest Instagram trends, an AI-based screening method to see all the trending colors of the day, a collage of different looks in different parts of the world and so on. The user simply needs to choose a color. 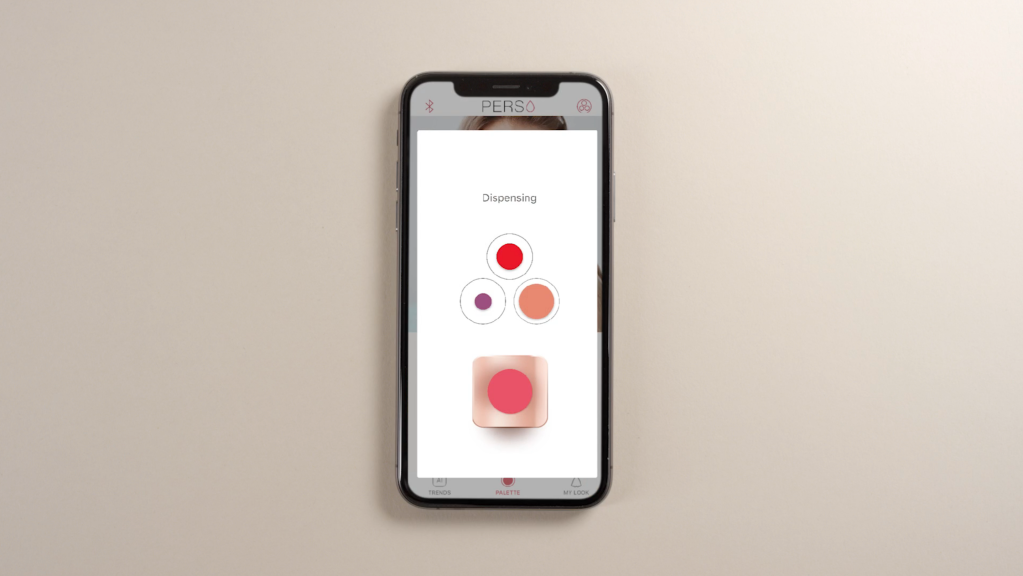 When a user selects a lip shade, the software figures out how to blend it from the cartridges in the device.  Courtesy image 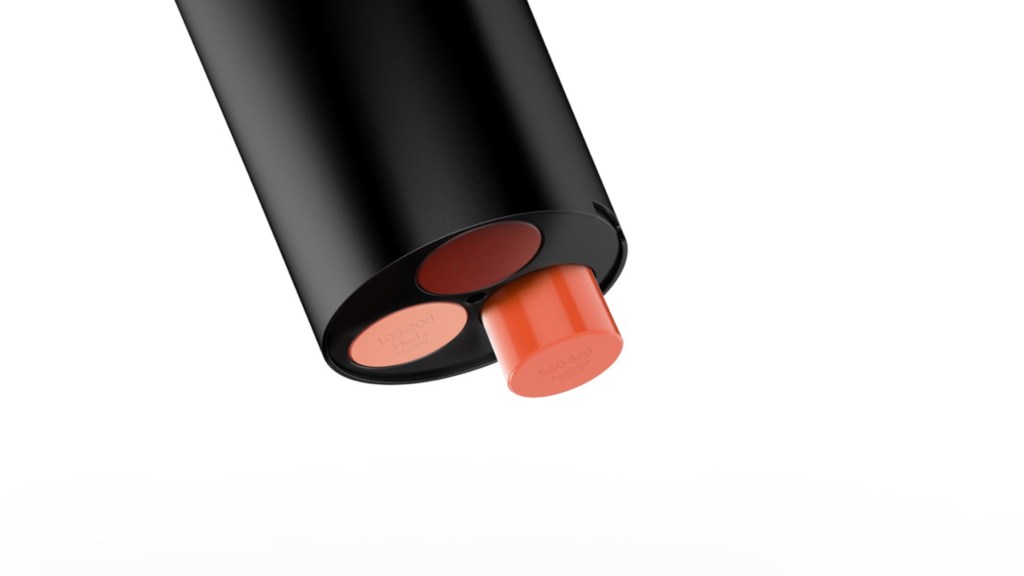 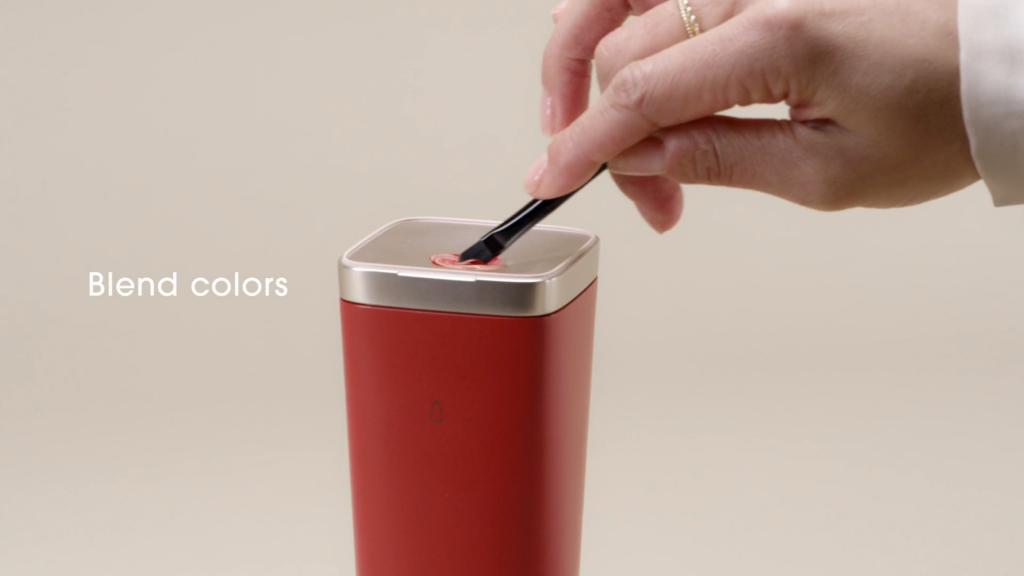 The device extrudes liquid lipstick to achieve the desired color. From there, the customer just blends it to apply.  Courtesy image

From there, options emerge to try it on virtually using augmented reality. Users can see their chosen lip colors overlaid on their faces through a live selfie view on their phones, or have the software figure out how to blend the particular shade from the cartridges and physically produce the makeup.

Much of Perso’s smarts comes from L’Oréal-owned beauty AR firm Modiface, which powers the AI-based skin-care analysis and AR lipstick try-on. And indeed, numerous L’Oréal initiatives come together to create this product.

Not all of the company’s projects have produced such rosy results, though. Its collaboration with uBiome, announced at South By Southwest last year, ceased before it even began, due to the latter’s troubling business practices, FBI investigation and ultimate bankruptcy and closure.

According to a statement from the company, “L’Oréal suspended its work with uBiome in the spring of 2019. We remain committed to advancing scientific knowledge of the skin microbiome, as we believe it holds great promise for understanding its connection to our skin health.”

Indeed, setbacks like that haven’t stopped the company’s innovation team from pressing forward. And among beauty giants like P&G and L’Oréal, it’s clear that the race is on to solve some of beauty consumers’ biggest challenges.

That looks like a boon for customers who don’t know how to deal with fundamentals, like correctly matching foundation or choosing lip shades that work for them, as well as how to pinpoint and address skin issues.

If the face race continues heating up, those obstacles could be a thing of the past.

Also getting in on the action, Neutrogena’s updates for its Skin360 aren’t just skin-deep either. But unlike its rivals, the Johnson & Johnson brand actually stepped back from hardware, revising the device — which offers skin analysis and personalized advice — as an app. The only hardware requirement is a recent smartphone.

The early version of the Skin360 scanner debuted at CES two years ago and launched in September 2018. It was a white tool that slipped onto an iPhone, a choice that Logan McGill, Neutrogena’s skin tech lead, considered “absolutely necessary” at the time.

“The camera strength within your phone wasn’t strong enough to be able to provide that clinical-grade imaging,” she said. “So we launched a tool that was able to create this lab-like environment. Fast forward two years, and after the launch of that tool, we have seen extraordinary growth within the engines and the skin analysis that are based off of a selfie.”

To make the system work, Neutrogena partnered with Perfect Corp., maker of the YouCam AR beauty apps, which provided the advanced diagnostics. The app also offers behavior coaching, leveraging the vast resources at Johnson & Johnson, including its team of behavioral scientists.

J&J describes the AI in the new, hardware-free version of Skin360 as “much enhanced,” compared to the previous iteration. And, it turns out, the tech is also critical for Neutrogena’s MaskID, its personalized 3D-printed sheet mask. It can map out the human face, as well as find and understand the geometry of it, to create a personalized fitting.

Such advancements couldn’t have happened without the evolution of smartphone cameras. Newer iPhones and Androids offer a significant boost in the quality of images, allowing companies like Neutrogena to zero in on the skin, all the way down to the pore-level.

Here, the best part for consumers is that the tool is available via download, making it a no-fuss proposition.

Ease of use is a priority, according to the company. To make the system convenient, as well as more transparent in its benefits, Neutrogena mapped its product development to consumer feedback. It also does a lot of testing — in fact, the company has already soft-launched the app ahead of its announcement on Friday, partially to see early feedback on the new version.

Confident in this selfie-capture methodology, the company can now appeal to both iOS and Android users. “It’s much easier for the consumer,” McGill added.