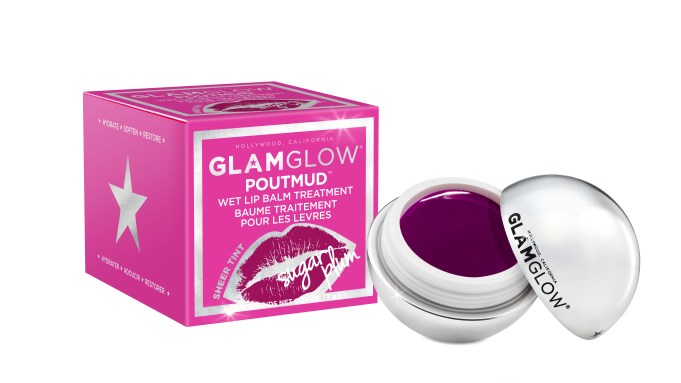 Glamglow is about much more than masks — and its latest products are out to prove it.

Two years after being acquired by Estée Lauder Cos. Inc. and five years after founders Glenn and Shannon Dellimore spiced up the mask segment at stores, the brand has diversified its product portfolio by crossing skin-care categories into moisturizer and edging into makeup with lip plumpers and balms. The product progression provides a glimpse of the would-be future of Glamglow as a well-rounded beauty player powered by formulas that trigger immediate, noticeable results.

“Glamglow was a strategic opportunity for Estée Lauder Cos. to enhance its positioning in prestige skin care, particularly within the fast-growing subcategory of facial masks with a brand with a very distinct brand proposition — skin care that is sexy, innovative and fun,” said John Demsey, executive group president at Estée Lauder. “Under founders Glenn and Shannon Dellimore’s creative leadership, Glamglow has moved into skin care/makeup hybrid categories such as lip and moisture, and we’re already seeing significant wins.”

When Glamglow took the beauty industry by storm, Youthmud was its calling card, and the Dellimores originally believed it was the only product the brand needed. But they ultimately realized their masks could be tweaked to address issues confronting different skin concerns and Supermud, a treatment for acne and blemishes, was born in 2013 and has gone on to be the top-selling mask at Sephora. Glamglow initially ventured beyond masks early last year with four mud-to-foam cleansers: Supercleanse, Thirstycleanse, Powercleanse and Youthcleanse.

“Both Shannon and I were terrified consumers wouldn’t understand why we were launching a cleanser. Because we were terrified, that made us work harder to make sure it would be the very best cleanser we could launch, and that’s the same for every category we go into. When we were going into lips, we were also terrified that consumers wouldn’t understand why were doing lips. That drove us to make sure we had the best lip product we could launch,” said Glenn Dellimore, speaking to WWD prior to Glamglow’s anniversary party at SmogShoppe in Los Angeles. “I think that’s the reason every product we’ve launched has been super successful. It goes back to us not being complacent.”

Branching into makeup, Glamglow unfurled the lip products Poutmud lip balm treatment and exfoliating treatment in the fall of 2015 before rolling out Plumprageous matte and gloss lip treatments in January of this year. In January next year, the brand’s lip assortment is expanding with six shades of Poutmud lip balms. In the moisture department, Glamglow is building upon the launch earlier this year of Glowstarter Mega Illuminating Moisturizer by introducing Volcasmic Matte Glow Moisturizer in January 2017.

“We go into a category with one hero product, we see if it has success in that category, and then we try to grow that category,” said Paula Pontes, senior vice president and global general manager at Glamglow. She emphasized Glamglow must maintain its authority in masks as it stretches across the beauty universe, but noted there’s plenty of room for the brand outside of masks to harness its shake-things-up attitude. “Our focus is looking at sleepy categories that we can disrupt because they haven’t had a lot of fun, where we can infuse fun and sexiness, and we are also focused on the intersection between makeup and skin care,” said Pontes, pointing to moisture as a sleepy category Glamglow enlivened with Glowstarter’s evident boost of glow.

The observable applications and impacts of Glamglow’s products have made it a standout on social media, a difficult endeavor for skin-care brands that don’t have the obvious transformative capabilities of makeup, and they’re crucial considerations in product development. “We are all about results and, when we say instant results, we really mean instant results,” Dellimore said. Pontes elaborated, “The selfie mask has been super strong for us, and one of the great things about Glowstarter is the glow is very visible. Because it is so visible, they [influencers] were actually using it and taking selfies with Glowstarter as a base for makeup or putting it on top of makeup to illuminate. The comments we got were, ‘You can take a picture or do a video, and it’s visible for the customer, and that’s fantastic.’ Our challenge is how do we translate that into other categories we want to go into.”

Another key challenge for Pontes, who assumed her post at Glamglow about a month ago, is instilling discipline. She likened the brand to a teenager becoming an adult and coping with growing pains. According to industry sources, the brand is on track to generate $150 million in retail sales for fiscal year 2017, up from an estimated $90 million in retail sales in 2013. “We are not that small anymore. We can’t say, ‘Oh, if we don’t forecast correctly, we can make the products up really quickly.’ We can’t. There are lead times,” Pontes said. “That’s what we are experiencing right now. It’s this realization that we are getting bigger and, when you get bigger, you have to be structured and structure done the right way can be helpful.”

Structure will be important as Glamglow spreads into new geographic territories. Pontes said the brand is available in 62 markets. It recently entered South Korea and rebooted its business in the U.K. Pontes sees opportunity in Asian department stores, but she’s not completely certain how it will manifest. “We need to figure out how to make it work in a department store environment. In the traditional department store model, the package didn’t speak for itself and you had a person speaking to the consumer. What we see globally is that the consumer is gravitating toward having their own relationship with the product and, if they need help, they will ask for help,” she said. “In Asia, it’s a conversation we are starting. It’s a question of building scale, too. Once you build scale, you can go in with a model that makes sense.”

No matter where it goes, Pontes and the Dellimores agree Glamglow won’t flourish if it forsakes its brand equity. They’re keen on nurturing Glamglow’s unusual mix of Hollywood glitz, social media prowess and serious performance in the jar. “Fueling our growth isn’t as much about the Estée Lauder Cos. Yes, there’s definitely a huge foundation we can rely upon, but I think any brand within any company can’t really rely on its mom and dad. You have to make your own path,” Dellimore said. “Glamglow has to strive to stay independent in terms of its success and that success won’t come because of who our mom and dad is. We have to find our own way.”