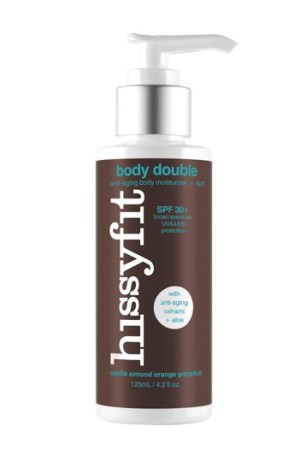 Hissyfit is available in Australia, New Zealand, the United Kingdom and the U.S., but the focus for Hissyfit’s growth is shifting to the U.S. market, where forthcoming products are set to launch first. The brand is sold at Henri Bendel and a handful of spas in the U.S., and it is considering specialty beauty retailers and TV home shopping for additional distribution later this year, although the exact outlets have not yet been finalized.

Oprah Winfrey’s longtime makeup artist Reggie Wells joined Hissyfit in September as international creative director to help raise the profile of the brand and aid with the development of a color cosmetics line scheduled for release in the fourth quarter. The line will cover eyes, lips and face, and kits will be featured prominently. Prices are still being determined.

“In the U.S., I think we have a lot of opportunity,” said Lee. “It had limited distribution, and I think that, with Reggie on board and with what we are trying to do, people will definitely start hearing more and more about it.”

Lee described the target customer for Hissyfit as a 25- to 50-year-old woman who buys well-known brands such as Lancôme and Estée Lauder, but is willing to experiment with smaller brands. To draw her to Hissyfit, the color cosmetics will build upon the brand’s concept of simplifying beauty regimens (its best-selling Saving Face is an antiaging foundation that protects skin from the sun with SPF 50) and make education a key component of its message.

“I was an art teacher for eight years in Baltimore City. If you teach steps, you usually get the experience of doing it. We have to get them [makeup users] a guide.…Hissyfit makeup is going to be easy to handle, and you don’t have to pretend that you know the color for your face. We introduce those for you,” said Wells, adding, “So many women go to the department store, pick up a shade and return it. There [should be] no return with Hissyfit.”

Wells, who has worked with celebrities the likes of Beyoncé, Brooke Shields, Janice Dickinson and Halle Berry, has conducted seminars with hundreds of women to advise them on how to apply makeup to suit their faces. He will continue to hold seminars for Hissyfit and will likely appear in stores and on TV for the brand. “Celebrities won’t make this company. It is about real women,” said Wells. “I need the time to talk to the women and [have them] relate to what I am bringing to them, and that is why we are going to be big with the seminars.”

In the year following its Australian debut, Hissyfit generated roughly $1.5 million in retail sales. Industry sources told WWD in October that they expected global annual retail sales for the brand to surpass $5 million. “A lot of things have happened since October. We’d like for it to be higher [than $5 million,]” said Lee. “It is doing extremely well in Australia, where it was founded. We want to bring it up [domestically] to the same level as Australia and then some. Especially with Reggie and all the credibility that he brings, I have no doubt that we will make a splash.”