The brand's product solution roots are the core of the new concept. 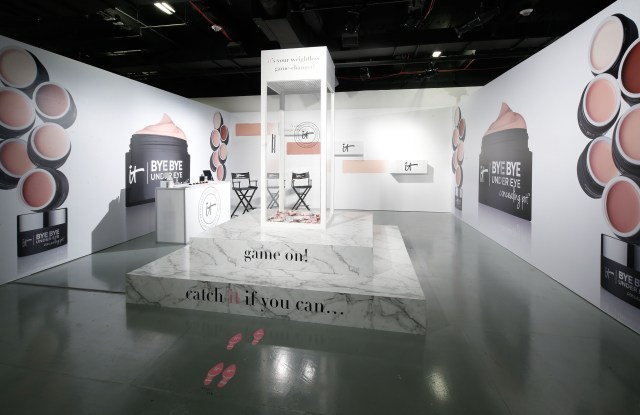 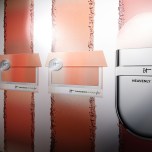 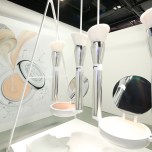 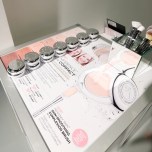 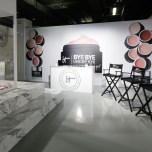 NEW YORK — A swing set fashioned from life-sized versions of Confidence in a Compact and Heavenly Skin makeup brushes, a seesaw made out of Brow Power Pomade and a projection screen with “breakouts” that can be zapped with darts that shoot out of a giant dummy of Bye Bye Breakout Powder are among the installations that comprise It Cosmetics’ “ExhibIT 2017,” which today opens to consumers.

The nine-year-old brand, acquired last July by L’Oréal for $1.2 billion, unveiled the interactive — and highly educational — exhibit in a 30,000-square-foot space at 415 Fifth Avenue in Midtown here to showcase its new retail concept. An It-branded pink carpet and step and repeat gave way to a stage with a mockup of the way customers will soon be able to shop It Cosmetics in 300 Ulta doors come late September. The stage was followed by a staircase plastered with inspirational messaging that led upstairs to the immersive, high-touch experience described above.

“You take a wand and literally make a blemish disappear and you learn why,” Jamie Kern Lima, cofounder and chief executive officer of It Cosmetics, told WWD during a walk-through of ExhibIT 2017, explaining that the brand is making its “product solution” roots the center of the concept. Customers will soon be able to shop the brand by 12 different beauty concerns — via a combination of existing and 21 new products and 52 stockkeeping units.

Kern Lima said she has taken the beauty issues women have been voicing since the inception of the brand and distilled them into a dozen categories where women can shop by concern. Ulta will present products based on each issue, which include: Aging Skin; Dark Spots; Tired, Dark Circles; Pores; Lines and Wrinkles; Blemishes and Acne; Sparse Lashes; Brow Drama; Redness; Dull Skin, and Dry Skin. Ulta doors that stock the new concept will add 12 feet of incremental space to the 24 feet the brand already occupies in all of the retailer’s doors.

“We’ve never done anything like this….Because we’re known for only launching a couple of products a year, it’s been this accumulation of all of our customers asking for us to solve their problems and us developing these over the years,” Kern Lima said. “What we hear about a lot is, ‘Your makeup is helping, my skin is getting better, but can you create something that targets acne specifically?’ and we never had done that.”

The installation also includes a money machine with swirling $100 “It bills” as part of a Dark Circles experience and a slide made of a life-size “spoolie” — the brush end of a mascara wand — in the Brow Drama section. An aerial silk stage has a dancer who dances with silk to reinforce the concept that products are infused with silk and not talc.

“It’s also leveraging that social relationship because when you scour our Instagram or Facebook, every post is people asking to solve their problems. You can do a post about the weather and people comment, ‘Hey, I love these products, can you create something that makes my redness go away?’” Kern Lima said.

ExhibIT 2017 was presented to press Tuesday night and will today open to 1,200 consumers through a series of four sessions taking place between 5 and 9 p.m. It Cosmetics sent an e-mail and posted about the upcoming ExhibIT on its social media channels earlier this summer, and the first 1,200 consumers to respond were able to secure spots in the 300-person sessions, according to the brand, where there is still a 250 person waitlist.

Charlotte Tilbury has built a cult makeup brand merchandized by 10 — now 11 — makeup looks with easy access to the products that comprise each, as well as detailed information and how-to’s — and Kern Lima is hoping a similar approach will resonate with her loyal beauty base.

“We’re taking the voice of the customer to a whole new level….We’re not telling her, it’s her saying, ‘Solve my problems,’ and we’re doing that. It’s empowering the customer in a whole new way. Traditionally in beauty, a traditional brand — which we’re not — would launch product and put a huge celebrity ad campaign behind it….That can be fun and successful, too, but we’re taking a big risk [here]. It’s what all of our It Girls…It Guys and It Moms, it’s everything they’ve been asking for,” Kern Lima said.