She has developed a nine-item treatment line called Shinto Clinical. 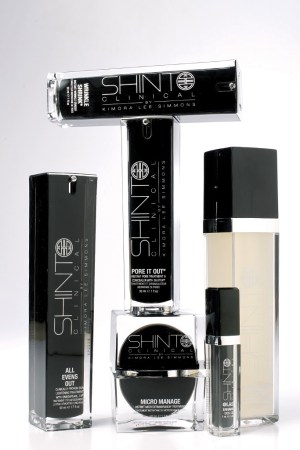 Kimora Lee Simmons, who has put her name on six fragrances with thoughts of a seventh and has dabbled in the color cosmetics market, is stepping into the skin care business with a worldly attitude.

For her debut, Simmons has developed a nine-item treatment line called Shinto Clinical, which is designed to encompass cultural elements of the East and the West with a dash of humor thrown in. “This line is about their Eastern allure of diet and beautiful skin. It’s based on cultures that live from the sea,” she said, ticking a list of ingredients such as fish oil, pearl powder, omegas, beta glucan, mushroom and Wakame kelp extract. “The Western [influence] is the medicine, the efficacy, the delivery and the clinical results. That’s why we call this Shinto Clinical; this is really a clinical range.” Shinto means “of the gods,” she noted.

A bit of humor winks out from the product names, such as Pore It Out, the pore concealer; Watch Your Tone, the antiage peptide toner, and Wrinkle Shrink, a wrinkle eraser product. “It’s very me,” said the statuesque model and fashion entrepreneur with a laugh.

The 36-year-old Simmons said she felt it was the time in her life — after a divorce from Russell Simmons, a marriage to Djimon Hounsou and a change of her fashion companies — to make the serious move into skin care. “It was a turning point for me and I was just wondering what comes next,” she said, noting that the customers and fans who have followed her since she was in her teens are also feeling changes. “I realized this whole generation of young people has grown up with me. We are no longer living in the clubs,” she said. “We have responsibilities, we have families, we have kids — I have two husbands, I always say I have an ex and a ‘next’ — I have three kids. I have a million jobs. So I wanted something that certainly addressed my particular needs in skin care.”

Simmons worked with New York dermatologist Eric Schweiger in the line’s two-year development process, and she proudly emphasizes her hands-on involvement — including devoting episodes of her syndicated cable TV show, “Life in the Fab Lane,” to different aspects of the project, including formula development, photo shoots and the model search.

The engine of the different formulas are Omegapearl-18, an antiage concoction pearl powder; Wakame kelp; beta-glucan mushroom, and Omega 3, 6 and 9. The nine products in the line include an antiage moisturizer, priced $65; an antiwrinkle serum, also $65; an eyelash enhancer, $68; a pore minimizer, $45; a microdermabrasion cream, $59; and a skin lightening product for $68. An antiage cleanser and a toner are each priced at $32 apiece. A $65 anticellulite cream, Hold It Tight, will be launched later in the year. The target audience is women aged 25 to 45 years of age.

The line will make its debut on QVC on Feb. 24 and the retail rollout will start in late February and early March, consisting initially of Nordstrom and Fred Segal plus the Shopping Channel in Canada.

Kate Sullivan, senior vice president of marketing and business development for Kimora Lee Simmons, said, “We are going to launch in 25 to 30 doors, but we are looking to grow that in the next two years. We want to launch, develop and build the line strategically with the partners, and then roll it out to the Middle East and Asia,” noting that the global distribution will number about 200 doors. QVC is a large part of the equation, as is Simmons’ high profile on TV and in social media.

Simmons declined to project, but industry sources calculate the brand could have a target of doing $5 million to $6 million in domestic retail sales during the first 18 months before the overseas expansion.

Simmons said she learned about the necessity of brand building while launching her color brand at Sephora. “You have to know, you have to support, you have to be able to educate and you have to teach,” she said. “You have to be responsible for all that, not [the retailer]. You have to plan it out. There is KLS Cosmetics still scraggling around. But it needs to be revamped and redone, so that will be after this.”