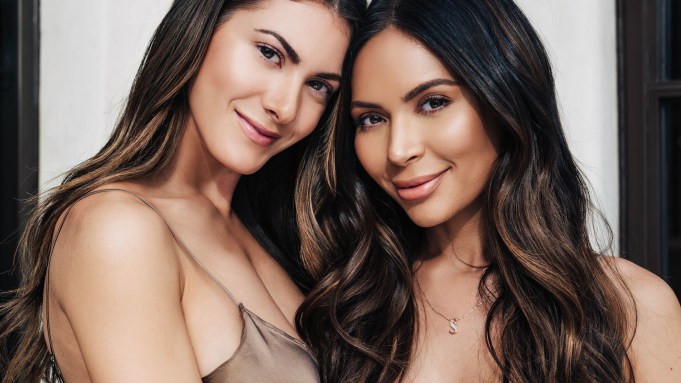 You don’t have to be a Kardashian or a Jenner to build a brand on social media.

You do, however, need to be an influencer with a devoted, engaged following willing to buy whatever product you’re shilling. And in the case of superinfluencer Marianna Hewitt, who together with business partner, fellow influencer and best friend Lauren Gores Ireland, cofounded Summer Fridays, the two already have this down to a science.

Their brand, inclusive of one $48 Jet Lag Mask to start, is already the best-selling skin-care product on sephora.com — less than two weeks after launching on summerfridays.com and the beauty retailer’s app and e-commerce site (the brand will roll out in Sephora doors later this year). Currently, Summer Fridays’ sole product is outselling brands like La Mer, The Ordinary and Sunday Riley, as well as similar masks from SK-II, Glamglow and Dr. Jart, labels all widely known for their masking. WWD was unable to obtain sales figures, but Hewitt confirmed that once Sephora came on board late last year as Summer Fridays’ launch partner, the retailer was so confident in the product that the initial production run was upped by six times.

Hewitt and Gores Ireland credit a thoughtful mix of promotion on Instagram — from a series of stories that started to tease the project a week before going on sale to Hewitt’s reposting of user-generated content — to attaining such rapid success, both from a social media and sales perspective.

“Everything is really done on social. We call ourselves a social-first brand and we mean that,” Marianna Hewitt said. “We think Instagram first because we know it’s the most effective and fastest way to reach or audience. When we make announcements, we ask, ‘How are we going to post this on Instagram’ and ‘What picture are we going to show?’ and ‘How are we going to show our girls how to use this?’ Instead of making them go to our site or watch a YouTube video, we put all the information there [Instagram].”

This technically makes Summer Fridays an “Instagram-first brand,” but Hewitt and Gores Ireland made sure to supplement all of this online activity with strategic offline activations (which, not surprisingly, wound up fueling even more buzz on Instagram).

Gores Ireland said a key part of the launch plan was hosting bicoastal events in New York City and Los Angeles. The first had a media-heavy guest list and took place at Spring Studios in TriBeCa and a daytime Los Angeles fete two days later was filled with influencers. And while attendees and vibes differed from the East to West coasts, the two both had 50 “regular people” guests who are followers of Hewitt, Gores Ireland and Summer Fridays. The group was selected by a lottery from fans who responded by e-mail to one of Hewitt’s Instagram posts. There was also a giveaway where one fan was selected on social (followers were asked to post a photo with the hashtag #myjetlaglife explaining what caused their personal “jet lag”) and flown out to the L.A. launch party.

“We’ve been really involved with our fans and followers so it was important to have them at both events. At the L.A. event, one of them said to me, ‘Finally a skin-care brand created for us by us,'” Gores Ireland said. “We’re busy, we’re on the go, we care about what we put on our skin — we’re not executives in a boardroom, we’re not guessing what works. We know what she wants because we talk to her every single day.”

But for Summer Fridays specifically, the early success from a social media engagement and sales perspective is impressive, as it debunks two of the common doubts that traditional beauty players and retailers have when it comes to ventures of this kind. The first is that influencer and social media marketing does work and the second is that a brand doesn’t need to launch with a plethora of product. Specifically, the latter raises the question of whether it’s possible to launch a brand with just a single item — and all signs point to yes, pending the category is complexion, where variety of shade range is a must.

“Social media has become an impactful marketing tool and has a profound effect on the way clients receive news, make purchasing decisions and share with others. We find that more and more brands, not just the influencer-led ones, are leveraging social media,” said Artemis Patrick, Sephora’s chief merchandising officer, noting that some other influencer-founded brands carried by the retailer include Huda Beauty and Kat Von D Beauty.

“[We] have a rich history of building brands out of just a few cult products…Some of our most successful brand launches started with just a few products, including brands like Beautyblender, Urban Decay and Glamglow,” she continued.

Hewitt said a prescient sense in the conception phase with Gores Ireland nearly two years ago determined that their approach to the influencer-turned-brand space would be less is more. The two knew they wanted to build a social-first brand with an initially singular focus that would see a measured rollout of product.

Because it generally takes time to establish a brand that penetrates the consumer mind-set (and hopefully becomes a part of their regular beauty routine), Summer Fridays won’t launch its second product for another six months. Hewitt wanted to give her followers ample time to get acquainted with what she and Gores Ireland are doing before the next mask goes on sale in the fall. Once the second product drops, the brand will have a quarterly launch cadence.

“It’s been an amazing splash right now, with fans buying and posting and sharing, but it takes a while for people to learn about a brand,” Hewitt said. “We knew and we felt confident that we [could] launch a brand with one product and be just as effective and impactful with one really strong product versus having to come out with four [stockkeeping units] at once. Now everyone is really focused on the Jet Lag mask, and they won’t get confused by too many products and wind up not buying anything because there’s too many options.”

Overall it’s a pivotal time in influencer universe, with Summer Fridays being the latest indication that the content creator turned brand phenomenon has evolved from novelty to status quo. And it’s a recipe that appears to be resonating with consumers, whether it’s a hydrating Jet Lag mask or a contemporary apparel line, in the case of Chriselle Lim’s collaboration with J.O.A. that bowed on March 15 exclusively for Nordstrom.

Influencer brands are no longer reserved for the Chiara Ferragnis of the world. Today, introducing product — apparel, beauty, home, lifestyle or otherwise — is what one has to do to in order build a long-lasting, relevant brand and sustainable business. There’s a range of ways to do this, with some influencers teaming with brands on co-collaborations à la Lim or Jaclyn Hill for Becca, while others are building stand-alone businesses such as Hewitt and Gores Ireland.

“There are so many girls using, sharing and posting their reviews, and because of our community — just on Instagram stories alone — it’s made such a huge impact,” Hewitt added. “People with 100 followers to one million followers are all making a huge impact. We really encourage them to share because we repost not just influencers but non-influencers too. [Followers] feel part of all this and see that their reviews are being shared and are important too. It encourages the ripple to post and share because they want to be part of that user-generated content. Everyone is contributing to the success because everyone is sharing themselves using it.”