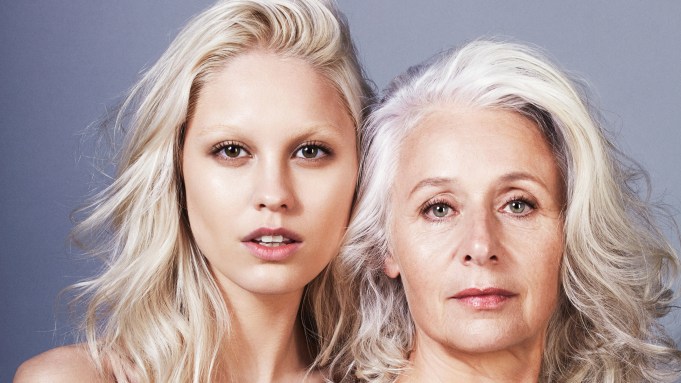 Wrinkles are no longer the thing.

The Millennial attitude toward skin care is wreaking havoc in the beauty world, where skin care had long produced impressive year-over-year gains. The views of the younger generation — a beauty-from-the-inside-out approach — represent a sharp departure from the antiwrinkle priorities of their Baby Boomer parents, and that flip is furrowing brows across the sector. Millennials want fast outcomes from natural or clinical products, and that goal — immediate results — is steering them toward cosmetics. The change is forcing beauty firms to toss their worn, wrinkled playbooks and start generating products and marketing strategies to reach a demographic that shops with a new set of values.

“For the last 10 years, it’s been lines, wrinkles, lines, wrinkles,” said Karen Grant, global beauty industry analyst at The NPD Group — but that is changing, and age-specialist products declined in 2015 for the first time in two years. “[Millennials] are just less anxious about the lines, the wrinkles, the gray hair, the natural hair,” Grant said. Of course, Millennials don’t really have wrinkles or gray hair to really worry about yet, but Grant contends there’s a shift that’s more about attitude and outlook: “There’s this overall sense of ‘oh, that’s good enough.’ It’s less about giving up and more about embracing who you are and what you are and how you look, and not feeling like you have to fit any mold.”

Millennials tend to be skeptical about glossy advertising that tries to talk at them.

The market shift creates an opening for small, nimble skin-care brands that target Millennial desires as much as it demands the established beauty players step up their games. As a category, prestige skin care in the U.S. gained 3 percent in 2015, according to NPD. That growth is paltry in comparison to growth of years’ past, such as 9 percent in 2013, NPD numbers show.

Makeup is the clear winner these days. The category was up 13 percent for 2015. The phenomenon is due in part to the rise of selfies. Cosmetics allow anyone to contour or strobe their every imperfection away, producing immediately the same taut, glowing skin as an intensive skin-care regimen.

The financial results of beauty companies echo the trend. At the Estée Lauder Cos. Inc., skin care brought in $1.2 billion for the quarter ended Dec. 31, down 3 percent year-over-year. Makeup, however, posted a 6 percent increase during that time frame. At Coty Inc., skin and body-care sales were down 8 percent for that quarter. Avon, which has struggled broadly, posted a 21 percent year-over-year decline in skin-care sales, though that figure reflects the company’s divestment of Liz Earle.

Aging gracefully seems to be more of a focus, experts agreed. “Wrinkles, to me, are smile lines,” says model and Instagram sensation Sarah Jane Adams, who touts her age of 61 with the hashtag #mywrinklesaremystripes on her @Saramaijewels Instagram account, which has more than 50,000 followers.

“[Millennials] are more skewed toward simplicity,” noted Sam Cheow, chief product accelerator at L’Oréal (that means his job is to identify trends and translate them into beauty innovations). “They look at aging in a very different way. It’s not top-of-mind for them, they are more problem-and-solution-centric.”

Within skin care, two subsegments — natural and clinical products — accounted for the entirety of the category’s growth. Combined, the groups make up the largest share of prestige skin-care sales.

Doctor-branded products are resonating well with the Millennial consumer, who craves authoritative advice, according to Grant. “That age group tends to say they look for that type of endorsement,” she said.

Moreover, 111 Skin, the brand started by plastic surgeon Yannis Alexandrides, has experienced a 142 percent sales increase year-over-year. Rodan + Fields, founded by the same dermatologists who founded Proactiv — Katie Rodan and Kathy Fields — had a 90 percent sales increase for 2015, to nearly $627 million. And Colbert MD, the skin-care brand founded by dermatologist David Colbert, has experienced a 38 percent increase year-to-date, according to industry sources.

Natural skin-care brands are also experiencing sales gains. S.W. Basics, which makes products with five ingredients or fewer, is growing rapidly. The business had a more than 200 percent growth rate in 2015, according to industry sources. It has upped distribution considerably, and is selling at Urban Outfitters and Target. “There has been a lot of natural stuff around for a long time, it’s just that the brands don’t try to speak to younger people,” said S.W. Basics founder Adina Grigore. A Millennial herself, Grigore said she developed and launched the line after she couldn’t find natural products that resonated with her.

Ingestible products, like beauty-specific vitamins, supplements and even beverages, are also becoming tied in as part of the skin-care package. That market has grown more than five times, in two years, to $4.1 million in 2015.

Miyu, which uses “beauty from the inside out” as its slogan, launched a line of beauty teas that are sold in Anthropologie, among other outlets. Aloha also has a beauty tea that claims to help skin glow. Earlier this year, Steaz launched cactus water, which it says can have anti-inflammatory, and thus skin, benefits. On the supplements end, Nordstrom has started selling 8G, which is made up of eight dehydrated greens such as spinach and kale, and is said to reduce the effects of aging and promote collagen production. Beauty was at the forefront of that decision, said Gemma Lionello, executive vice president and general merchandise manager of Nordstrom Beauty.

“There’s this emphasis that you have to be real and raw and underneath all of that you still look good because you’re healthy,” said Alicia Yoon, founder of Korean beauty e-commerce business Peach & Lily.

Moving a step beyond ingestibles being consumed for the sake of skin is two-year-old skin-care line Tula, which includes probiotics inside its potions — something relatively new to the U.S., while popular in Europe.

“The whole line is all about not just probiotics, but the concept that what we do for ourselves internally is also great for our skin,” said Roshini Raj, a gastroenterologist and Tula’s founder.

Nuori, a natural brand that uses fresh ingredients and puts sell-by and expiration dates on its product packaging, is also experiencing sales gains, according to founder Jasmi Bonnén. The eight-month-old business has increased distribution to about 60 doors in 14 countries, and is planning to be in 100 doors by the end of this year. “I think for a new start-up, it’s very easy to connect with Millennials because authenticity and transparency are really the cornerstone of our company culture — we’re passionate about this idea of freshness,” Bonnén said.

The Estée Lauder Cos. Inc. — a Boomer itself with a 1946 founding birthday — is developing products and messaging strategies to try to keep up with the shift. “We are living in a time that’s led by Millennials and a time that is led by Millennial influence, and I think to understand skin care, we have to take a step back and talk about what matters to this incredibly important and influential group,” said Jane Hudis, group president at Estée Lauder for the Lauder brand, Aerin, Origins, Aveda, Darphin and La Mer. “This is a group that is living their lives on their mobile phones, living their lives taking pictures all day long, and whether it’s Instagram or Snapchat or FaceTime, the way somebody looks, the way somebody poses — what they put forth to the world really matters,” said Hudis.

In March, Lauder launched The Estée Edit by Estée Lauder, a collection of skin-care and cosmetics products aimed at Millennial consumers, at Sephora. The Millennial face of Lauder, Kendall Jenner, and beauty blogger Irene Kim, selected some of the products in the lineup.

The collection includes multitasking products like a Pore Vanishing Stick, which aims to blur the look of pores, even skin tone and minimize shine, and Beam Team Hydrate + Glow, a moisturizer plus illuminator that claims to change the look of skin while delivering hydrating benefits. “We are introducing more products with immediate benefits,” Hudis said.

Products that emphasized complexion preparation had the biggest gains, according to NPD ­— makeup primers and CC creams alone brought in $490 million to the beauty industry in 2015. “The consumer is trying to get the benefits, but she’s not locked into using skin care to get the skin-care benefits,” said Grant of NPD. “The need doesn’t go away. The opportunity lies in understanding how to address needs that may be becoming more realized, then [fulfilling] them and [keeping] ahead of the trend. Because she’s moving, we just need to move with her.”

When beauty-blogger-turned-entrepreneur Emily Weiss started skin-care line Glossier, she formulated products that provided immediate effects, but also allowed users to wear less makeup. Glossier’s priming moisturizer is formulated to give skin a velvety feel, a glow-y look and calm down redness. “We added an antiredness ingredient that…allows you to not wear as much foundation.” The brand, now well into Phase 2 (cosmetics), continues to grow, according to Weiss, citing replenishment figures. “Our girls who start with priming moisturizer end up buying it two-and-a-half to three times per year,” she said.

“You have skin care and you have makeup, and I know the lines are getting blurred, but there’s definitely a white space between the two,” said GlamGlow cofounder Glenn Dellimore. That brand, he feels, fits into that space.

GlamGlow, acquired by Lauder in 2015, develops mud masks that help Hollywood celebrities quickly become camera-ready. The products have also resonated far beyond Tinseltown, and have been picked up by many Millennial consumers, according to the company.

The face-mask subcategory is experiencing growth of its own — in two years, the market doubled from $60 million in sales in 2013, to roughly $120 million in sales in 2015, according to NPD. Aside from immediate effects, the products are often grabbed as a last-minute impulse buy, which is driving sales. Plus, as experts pointed out, masks are fun.

“We are living in an era where fun rules, and I think you can have great skin-care products and get people engaged and excited and also have a good time,” Hudis said. “Not only is skin care about performance and delivering results and looking great when you wake up in the morning, but we really need to make it fun.”

Part of the amusement from masks specifically comes from the ability to share them — especially on social media. “The idea of a mask is very visual — the PowerFoil mask is a sellout because it’s so visual on Instagram,” Hudis says. “It’s very experiential…that experience makes these products very interesting and exciting to share.”

“Before you wouldn’t see anybody posting with an actual treatment mask — you’re now seeing friends post together, couples post together,” Dellimore said.

Social media sharing and engagement is one of the core ways for brands to break into the market, and perhaps more importantly, the conversation. Before Glossier’s product launch, for example, came Glossier’s Instagram account. “Social media for us has always been our number-one communication channel,” Weiss said. “By the time we launched Glossier, we had 15,000 followers.”

“[Millennials] don’t want to be spoken at, they want to be engaged,” said Cheow.

Glossier’s take on reaching the Millennial consumer relies heavily on social media, though it does include an advertising component. That approach is a departure from companies’ reliance on glossy advertisements to reach and direct consumers toward products. Millennials are skeptical about those campaigns, and tend to view the directions as suggestions, giving their attention to advertising that connects with them, and using products in a way that’s customized to their specific needs. “Millennials look at their skin care in a way that allows for interpretation,” said Hudis at Lauder. “They put themselves into the conversation, where Boomers are more likely to take instruction and use things in a particular way.”