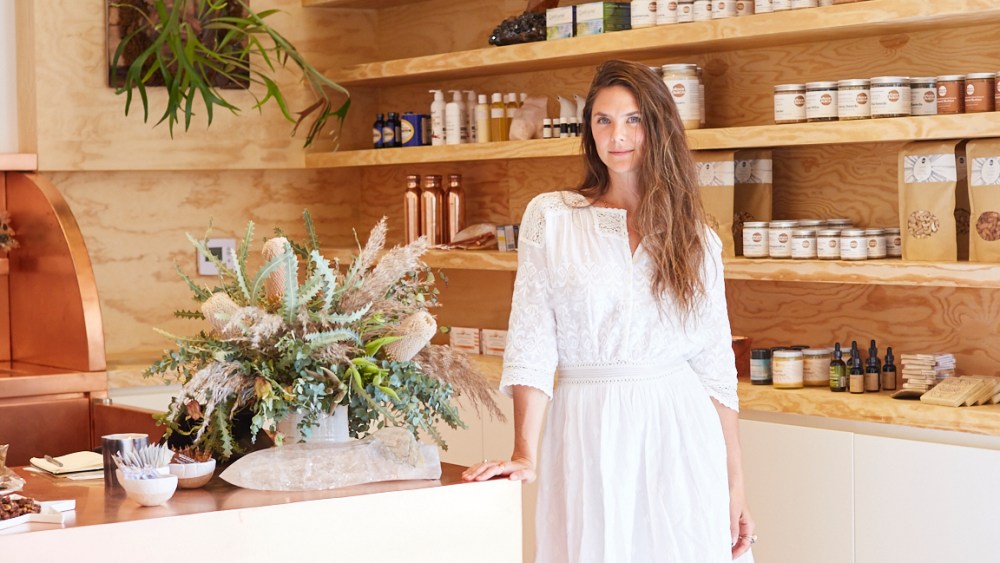 Moon Juice is closing in on the apex of fashion and beauty in Los Angeles with a new Melrose Place location, and it’s not a coincidence. The brainchild of Amanda Chantal Bacon, an occasionally controversial evangelist of healthy eating, drinking and prettying, the wellness concept is making a big push into beauty.

“We are in a moment where there is a gray area between food and beauty products, and we are living in that gray area that’s inside-out beauty,” said Bacon, adding, “I’m really attached to having these beautiful, healing and intimate places. Rather than trying to scale out to 10 juice shops, we can scale something like Moon Dust. We can reach more people and actually get the pricing down. My heart and soul is really in these Los Angeles outposts. I love that we’re having a party, but how do we get this to everyone?”

Beauty stores’ enthusiasm for Moon Juice — it’s in around 70 now — initially astonished Bacon. Not too long ago, she didn’t even wear makeup. But she’s integrated cosmetics into her regimen as natural beauty products have proliferated. She sported mascara and the remnants of lip gloss on Wednesday at the Moon Juice opening. “It’s so funny we have been pegged as a beauty company and are in the beauty conversation because, five years ago, I was in the category of weird hippie,” said Bacon. “I was just so antibeauty because it was large corporations using ingredients that had endocrine disruptors in them. Those things are not for me.”

The beauty things that are for Bacon are showcased at Moon Juice. Several beauty brands are available at its shops, including Living Libations, Pratima, Shiva Rose, Under Luna, Monk Oil, Mauli and Odacité, which formulated a serum and mist for Moon Juice. “These are all products that I actually use on my body and face. In most cases, I know the founders, their intentions and how they make the products,” she said. “For anything to get on the shelf, I bring it home and use it several times. It works for me, and I vet it with other people I trust.”

The rise of natural beauty — both in terms of safer and greener ingredient decks and a preference for realistic appearances — created a niche for these brands and for Moon Juice in the beauty sector. Not only does Moon Juice embody a holistic take on beauty, Bacon herself exemplifies a shift among many Millennials toward growing old gracefully. A few white hairs are popping into Bacon’s mane, and she’s happy to let them be.

“For men, it’s sexy when they have salt-and-pepper hair. Why is that not sexy for me?” asked Bacon. “I didn’t really fit into the beauty story before and was not interested in large male-owned companies that felt really fear-based to me and scared women into thinking they were not naturally beautiful and that they had to squeeze themselves into what was being blasted out there. I’m not interested in that story, but I am in this other story of actually reexamining what is beautiful.”

As an advocate for cleaning up diets and beauty routines, Bacon is a divisive figure. Similar to Gwyneth Paltrow, another lifestyle guru and Moon Juice fan, she’s criticized for being pretentious, promoting exorbitant goods and encouraging impractical choices. Bacon was lambasted online following a food diary published by Elle detailing her intake of unfamiliar items such as reishi, activated cashews and quinton. “That Elle article was so awakening to me,” she said. “I actually thought that, manners aside, some very good questions were asked. Maybe not in the nicest way, but at the heart of it [were the questions]: Does it really work? Is it safe? Does it taste good? Am I invited? Is it too expensive?”

Bacon is keenly aware her message and Moon Juice can be intimidating. She doesn’t expect anyone to precisely copy her habits. Instead, she urges small steps in a better direction. “I didn’t come out of my mother’s womb [knowing about] blue spirulina for your brain and schisandra for your skin. I was a C-section baby that was put into a plastic box and had debilitating food allergies and was on antibiotics, and had points in my life when I smoked half a pack of cigarettes. I was so stressed out I had a different personality, and I didn’t have successful relationships. I didn’t like the way my body felt. My skin wasn’t doing what I wanted it to do. I don’t come from a place of thinking I’m nature’s little apple that fell off the tree,” she said. “I also have an autoimmune disorder, so there’s a reason I do it so hardcore, and I love it. I get off on it.”

The spread of Moon Dust and the October release of “The Moon Juice Cookbook: Cook Cosmically for Body, Beauty, and Consciousness” are Bacon’s opportunities to convince skeptics that what she’s selling is worth buying. “People irritated by me and by the movement and feeling like it’s exclusive or that they can’t afford it, those are the people I want to talk to. I’m going to figure out ways to reach them,” she said. “I truly believe that, if I was given three minutes with any of those people, I think I could relate to them. I am sure they would walk away with something they feel good about that’s delicious and approachable that they could incorporate into their lives.”