The gender fluid line took over the former Chevrolet showroom and will offer skincare and products from artists with aligned interests.

The store at 5005 N. Figueroa Street, a former Chevrolet showroom, is being designed by founder Gloria Noto with architect Tyler Thomas and Gabbi Sun of Venn Studio and features custom furniture, such as a curved couch inspired by a Swiss midcentury Snake Sofa by Ueli Berger, custom shelving, a lime washed wall housing Noto products, a large arched mirror over a travertine sink and large white wall for brand announcements, editorials and messaging.

“For me, opening our flagship in L.A. was only natural. It’s home,” said Noto, who has lived in the city for more than 13 years and started Noto four years ago. “It felt like the right time for me to begin connecting with our customer on a physical basis, and to grow community on the ground. It feels so amazing bringing Noto not only on the web but in physical reality for myself and my team. Now seemed like the perfect time.” 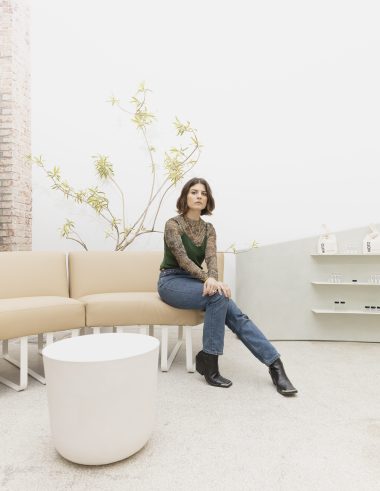 Noto Botanics is available in more than 230 stores and Noto is setting her sights on Europe, the U.K. and Australia.

Gloria Noto launched her namesake cosmetics line while operating her publication, The Work Magazine, which she halted to focus on Noto, and her makeup career, which she slowed also to focus on the line. “I still do makeup, but more rarely and more selectively,” she said. Thankfully my agent is OK with this and understands that I have Noto as my main role. I think having this store will expand my time with my company even more, not only because it is so beautiful and I always want to be hanging out in there, but because our main office is also in the back of the store, which is where you’ll find me, every day.”

She also believes that “almost all skin care is fluid,” but her line is unique in its story and brand identity. “I’ve chosen ingredients that work in ways that benefit everyone, as well as choices in the scent of herbs that feel open to all,” she explained. “We also include multiuse colors and highlighters that we express and share on all identities. In other words, we walk our talk in a holistic, from the core out, sort of way.”

Since the company’s founding in 2016, there has been an increase in skin-care brands that position themselves as unisex, inviting all genders to use their products. Noto said, “Fluidity is more than unisex. Fluidity is a spectrum that ranges in a very vast way, and we share that part of the picture.”