"All the different healing arts of my family have passed along generation to generation, and then Osea has been a manifestation of that."

Skin care brand Osea plans to ramp up product launches now that it has landed a minority investment from Cavu Venture Partners.

Osea was founded in 1996 by mother-daughter duo Jenefer and Melissa Palmer. The Malibu-based brand combines a seaweed blend with other botanicals and essential oils for the product line. Terms of the deal were not disclosed. 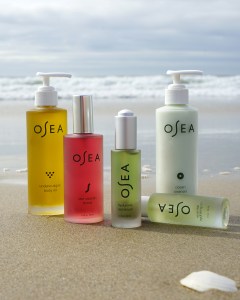 Melissa Palmer said that her mom, Jenefer, started the brand when she didn’t like the ingredients that were used in existing skin care products. Her inspiration came from Melissa Palmer’s great-grandmother, who used to swim in the ocean off the coast of Long Island year round.

“She literally raised us with this reverence of the ocean as a source of life,” Palmer said. “All the different healing arts of my family have passed along generation to generation, and then Osea has been a manifestation of that.”

“My mom created the line when she was running a holistic wellness center and spa in the ’80s,” Palmer said. “It was, at the time, very out there … pretty much everything that was going on there is now really cool and trendy, but we were definitely the weirdos for a long time.”

The Cavu investment is the first time Osea has taken on outside money in the brand’s 25-year history, Palmer said.

Initially, the brand distributed the line in high-end spas globally. Since then, it has built up its direct-to-consumer sales and built up its wholesale presence, too. Osea is now sold in Nordstrom, Bluemercury, Neiman Marcus, Credo, The Detox Market and launched with Ulta Beauty in 2020 as part of the retailer’s Conscious Beauty initiative.

Today, Osea has two main groups of customers — those aged between 25 and 34, and then those over 55, Palmer said.

With the investment, the business plans to ramp up product development and innovation, expand marketing efforts and debut its first brand campaign, and create a targeted international launch strategy. Product-wise, Osea has launched about one product a year, Palmer said, and will look to start launching one product a quarter.

The business has also added two team members: Erin Cotter as chief marketing officer, and Melissa Mao as chief sales officer. Cotter was most recently general manager of beauty and wellness at Goop, and Mao was previously vice president of sales at Coola.

Despite the pandemic, Palmer said Osea grew 115 percent in 2020, and had been doubling sales year-over-year for the six years prior. Palmer credited her “anxiety slash intuition” with the growth. Before COVID-19 reached pandemic levels, a friend in Hong Kong told her to pay attention to it, she said. She stocked up in order to make sure Osea was able to continue with production, and when other brands were running out of stock, Osea was seeing an influx of shoppers, she said.

“Really the most important part for us of the deal is amplifying everything that we’re already doing, which is just picking up the pace on the innovation and as ‘clean beauty’ is growing it’s pretty exciting that we were essentially here first,” Palmer said.

Cavu principal Jenna Jackson said in a statement that Osea’s long history was one of the reasons the firm was interested in it. “Cavu saw an opportunity to strategically partner with Osea to deliver on their mission to provide clean, performance-driven, vegan skin and body care products to more people,” she said.

Financo advised Osea on the investment.